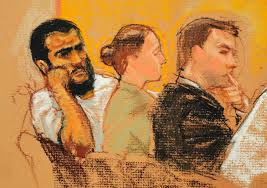 From the archives: Omar Khadr and Christopher Speer

[Khadr is back in the news because he was speaking at a university this week. It attracted attention. So, here is what I’ve written about him – and his victim – a couple years ago.]

Six days before he received the wound that killed him, Sgt. 1st Class Christopher J. Speer walked into a minefield to rescue two wounded Afghan children, according to fellow soldiers. He applied a tourniquet to one child and bandaged the other, they said. Then he stopped a passing military truck to take the wounded children to a U.S. Army field hospital. Speer saved those children, his colleagues said.

Speer won a medal for that.

I have a view that is different from many of my Liberal and liberal friends: while I don’t dispute that Omar Khadr was a child soldier, or that he was manipulated by al-Qaida, or that he was treated badly by the U.S. military after his capture – I also don’t dispute that he killed Christopher Speer with a hand grenade, or that Speer didn’t deserve that, or that Speer was mainly preoccupied with saving lives until the day he encountered Omar Khadr.

Speer had kids; Khadr was a kid.  Speer knew he was on a dangerous mission in which he could die; Khadr said he knew that, too.  What happened to Speer was a tragedy, and a lot of what happened to Khadr was, too.

All that said, I don’t think it is right that Omar Khadr should receive in excess of $10 million from Canada.  I don’t think he should get an apology, either.

He’s alive and free and happy, and the young guy who saved lives isn’t.  I think that should have ended the matter, but apparently others felt otherwise.

When he apologized to Christopher Speer’s widow, Omar Khadr said he had learned “the beauty of life.”

So, I’ll leave the final word to her, because her words should count, too.

Tabitha Speer, sitting in the front row, gripped the armrests of her chair during his comments, shaking her head as he spoke. When he stepped down and the jury left the room, she cried.

Earlier Thursday, Speer’s widow had testified that her husband was a “most generous, loving” husband before he was murdered by Khadr.

“He thought of me before he thought of himself,” she said. “I couldn’t have asked for a better father for my children.”

At times sobbing, she described her heartbreak at having to tell their children, then a three-year-old daughter and 10-month-old son, that their father had died.

“That moment a part of my daughter died with my husband,” she said, adding that eight years later, the children still feel the pain of his absence.

“I heard over and over how he’s the victim,” she said, glaring at Khadr. “I don’t see that. The victims … they are my children. Not you.”

Khadr’s defence lawyers did not cross-examine her.