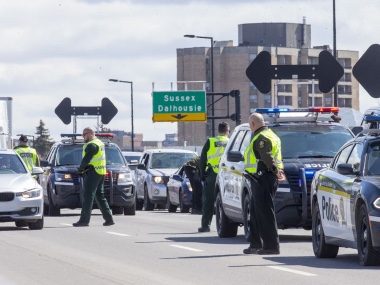 My latest: the blockading of a country

Armed police officers stopping people who were doing nothing wrong, and turning them away.

For weeks, for example, Quebec’s government put police on bridges leading from Ontario into Quebec. Thousands of people were stopped. Most got through, but thousands were turned back.

There were objections, although not from the federal government; there was a petition, but it gathered few signatures. Quebec only signaled its intention to abandon the “checkpoints” by the end of this, the Victoria Day long weekend.

Ottawa Mayor Jim Watson said: “I’m glad the Quebec Government has finally announced its decision to open up the border between Ottawa and Gatineau.”

He added: “I still don’t understand what was accomplished, but I am pleased that residents on both sides of the river can pass by freely.”

Who knows. It wasn’t saying. Besides, Quebec wasn’t the only government setting up armed blockades within Canada. New Brunswick did it, and so did Prince Edward Island.

In New Brunswick, for weeks, “provincial enforcement officers” were stationed at seven different road crossings, and two airports. Their task: turn back – forcibly, if need be –  anyone they deemed to be “traveling for non-essential reasons.” Canadians from Quebec, PEI and Nova Scotia were routinely refused entry to New Brunswick.

Over and over, motorists trying to enter the province had their licences checked and licence plates recorded – and they were grilled about where they’d been and where they were going. New Brunswick residents were being stopped and questioned, too.

“Don’t come if it’s not essential,” sniffed PEI’s Minster of Transportation.  “You are going to be turned away.”

And turned away they were. Case in point: Barry Humberstone, a 60-year-old land-owning PEI resident, had the wrong address on his driver’s licence. They wouldn’t let him across. He was sent away, even though he had nowhere to go.

Just as they did with the “checkpoints” on bridges leading into Quebec, the federal government said nothing about what PEI was doing. Zero.

There can be a debate about whether these measures – PEI quaintly, and appropriately, called theirs “Operation Isolation” – helped prevent the spread of the virus. In Quebec’s case, that seems highly doubtful. But it will be debated, at some distant point, in a Royal Commission or an inquiry. Or something.

But what about this question: were the actions of Quebec and New Brunswick and PEI actually legal? What about that?

Because, on a plain reading of Canada’s Constitution – which is, you know, our supreme statute – the blockades were completely illegal.

Section six of the Charter of Rights and Freedoms is about mobility rights. Here is what it says: “Every citizen of Canada has the right to enter, remain in and leave Canada.”

How important is that section? This important: section 33, the so-called notwithstanding clause – which governments like Quebec’s have routinely invoked to gut essential freedoms – does not even apply to it. It was seen by the framers of our Constitution as that critical: governments aren’t allowed to opt out of it – pandemic or no pandemic.

Sure: section one of the Charter permits courts to determine whether an unconstitutional measure is “reasonable.” But Quebec, New Brunswick and PEI didn’t even bother to make a quick reference application before a court to determine if they were in fact acting legally.  They just went ahead and set up blockades, some of them maintained by police officers carrying guns.

Many, I suspect, won’t care. Better safe than sorry, they’ll say. Better to lose some freedoms than lose one’s life.

During the Great Pandemic of 2020, in some parts of Canada, we needed to be reminded.