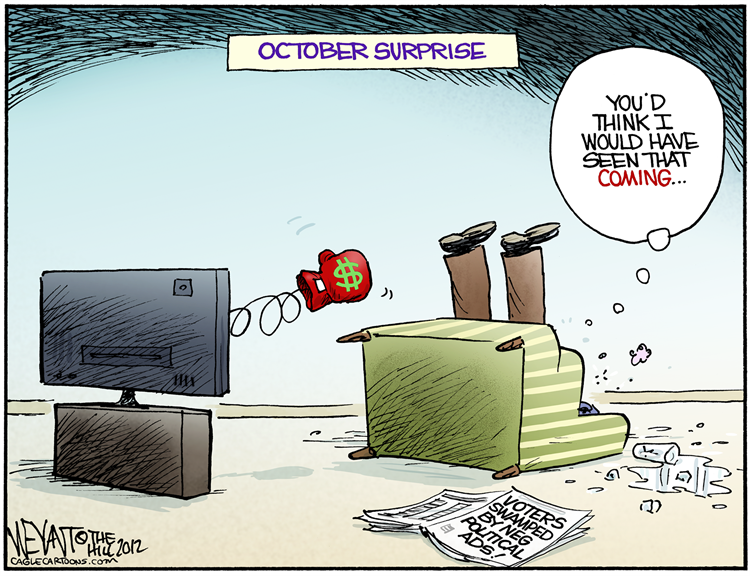 My latest: the October Surprise

October and the October Surprise, that is. It is as inevitable as it is predictable.

The October Surprise can be capitalized, like that, because it is an actual thing. And it can change everything, politically.

An October Surprise is usually some event – planned or not – which happens in the days leading up to a big vote. In the United States, presidential elections are always in the first part of November, and October Surprises can thereby affect the outcome of those. They happen a lot.

An October Surprise happened in 2016, and resulted in Donald Trump seizing the presidency. During the election, Trump had invited his friend Vladimir Putin to hack into Hilary Clinton’s email. Putin did.

Clinton’s emails thereafter became a controversy, and the FBI even investigated her because of it. They found no wrongdoing and shut down their investigation. Then, two weeks before the presidential vote, the clueless, witless FBI director announced the discovery of more emails, and the re-opening of their investigation.

Clinton, who – full disclosure, I worked for in two states and her Brooklyn headquarters – had been ahead in every poll. But after the FBI’s October Surprise, she was in big trouble.

The FBI again announced they were closing their investigation – the day before the vote. But it didn’t matter. It was too late.

Clinton lost because just 75,000 votes in three states – Michigan, Pennsylvania and Wisconsin – went to Trump, not her. And there is no doubt in Clinton’s mind why she lost the electoral college: the FBI’s October Surprise. Said Clinton. “[The FBI announcement] raised doubts that were groundless, baseless, proven to be, [and] stopped our momentum.“

October Surprises can do that. In October 1972, when Richard Nixon lied and suggested that “peace was at hand” in Vietnam. When it wasn’t. He won.

In October 1979, when Ronald Reagan’s election team actively worked to prevent the release of Americans being held hostage by Iran – and engineering their release on the very day President Jimmy Carter relinquished the presidency.

In October 1992, when an Independent Counsel indicted George H. W. Bush’s Secretary of Defense in the Iran-Contra Affair. Bush lost the election to Bill Clinton.

And so on and so on. October Surprises can and do happen.

Donald Trump is now doing things he swore he would never do. He has started to wear masks – something for which he used to mock Democratic presidential nominee Joe Biden. He has fired his campaign manager.

He has started echoing the warnings of scientists about the coronavirus pandemic. He has even cancelled his party’s convention in Florida – something he swore he would never do – because Republicans were going to stay away in droves.

Because he is losing an election that is less than 100 days away. Badly.

Biden is more trusted by Americans to handle the pandemic – 54 per cent to 34 per cent, a Washington Post-ABC News poll found last week. Trump is behind Biden nationally – and by double digits in some battleground states. The ones Trump must hold onto to win.

Mark McKinnon, the Republican strategist who oversaw advertising for President George W. Bush in 2004, acknowledged the pandemic is crushing Trump’s chances at re-election. “He’s wearing a mask and canceling the convention,” said McKinnon. “That’s a head-snapping reversal for a guy who hates to be wrong, hates to back down and, worst of all, hates to be perceived as weak.”

So, if you were a Republican advising Donald Trump – if you were facing not just a loss of the White House but the Senate too – what would you do? How would you prevent a historic wipeout?

On October Surprise, that’s how. And it’s a solution that’s medical, not political.

For weeks, pharmaceutical companies have been providing Donald Trump with a way out of his dilemma. They’ve been teasing out stories about possible COVID-19 vaccines. Their stock prices have surged dramatically.

It almost certainly won’t work, but no one will know that until after voting day.

The October Surprise is a cure for coronavirus that isn’t a cure.