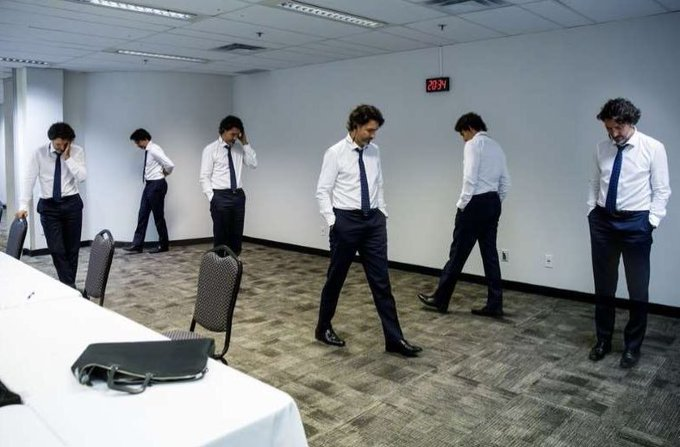 My latest: the Process Prime Minister

That’s what lawyers always say to judges: The solution to process, Your Honour, is even more process.

Now, Justin Trudeau is no lawyer, as everyone knows. His mauling of the Rule of Law during the SNC-Lavalin scandal — his obstruction of justice therein — made that pretty crystal-clear. But he sure has a lawyer’s enthusiasm for process, doesn’t he?

Actual results? Nope. Not his thing. Trudeau prefers to over-promise and under-deliver. Always. It’s stamped on his DNA.

Proof of this is found in Canada’s blossoming vaccination fiasco. At every turn, on every day, the Liberal leader’s response to the growing vaccination crisis has been to offer up sunny bromides about things that don’t matter. Process stuff.

So, Trudeau wheezes we don’t have a domestic vaccine manufacturing capacity (false). He shrugs, and says we should be comforted by the fact that we’ve purchased — but not actually received — lots of vaccine doses (also false). He says the big problem is the provinces being slow on coronavirus testing (false, false).

The actual problem is really simple: we don’t have vaccines, and the rest of the developed (and undeveloped) world mostly do. Canadians have noticed, too.

An Angus Reid survey released Friday said this: “Fifty-seven per cent of Canadians now say the government has done a poor job of securing COVID-19 doses for the population. This represents a near tripling from the number who said the same thing in early December (23 per cent).”

Among other things, that means we aren’t going to have a Spring election in the country. Good. But it also raises a rather important question: with his approval numbers in a free-fall, why does Justin Trudeau insist on prattling on about process, instead of actual results?

Here’s what the Times wrote. It’s worth quoting.

“Early in the pandemic, countries with populist, right-wing governments were suffering some of the worst outbreaks. Their problems all stemmed partly from leaders who rejected scientific expertise. More progressive and technocratic countries (like Canada) were doing a better job containing the pandemic. Politicians who believed in the ability of bureaucracies to accomplish complex jobs were succeeding at precisely that.”

Then something weird happened, noted the Times.

“But over the last few weeks, as vaccination has become a top priority, the pattern has changed. Progressive leaders in much of the world are now struggling to distribute coronavirus vaccines quickly and efficiently.”

The European Union vaccination effort has “descended into chaos,” said the Times. Democratic states “are below the national average.” And Justin Trudeau’s Canada is “far behind” the United States, the Times stated.

“Far behind” is right: the National Post published an extraordinary front page this week, listing the number of countries ahead of us on vaccines, in headline-sized fonts: 37 of them. THIRTY-SEVEN.

The reason, suggested the previously-Trudeau-fans at the New York Times? Process.

“Why?” queried the Times. “A common problem seems to be a focus on process rather than on getting shots into arms. Some progressive leaders are effectively sacrificing efficiency for what they consider to be equity.”

And therein lies the best explanation of all: Justin Trudeau is just being who he is. He prefers process over results. Talking over doing. Sizzle over steak. Always.

Missing from The New York Times‘ sober assessment of our vaccination failure? A pithy summary of Canada’s situation. So here it is, gratis.

We are so, so screwed.

[Warren Kinsella is a lawyer and a former Chief of Staff to a federal Liberal Minister of Health.]