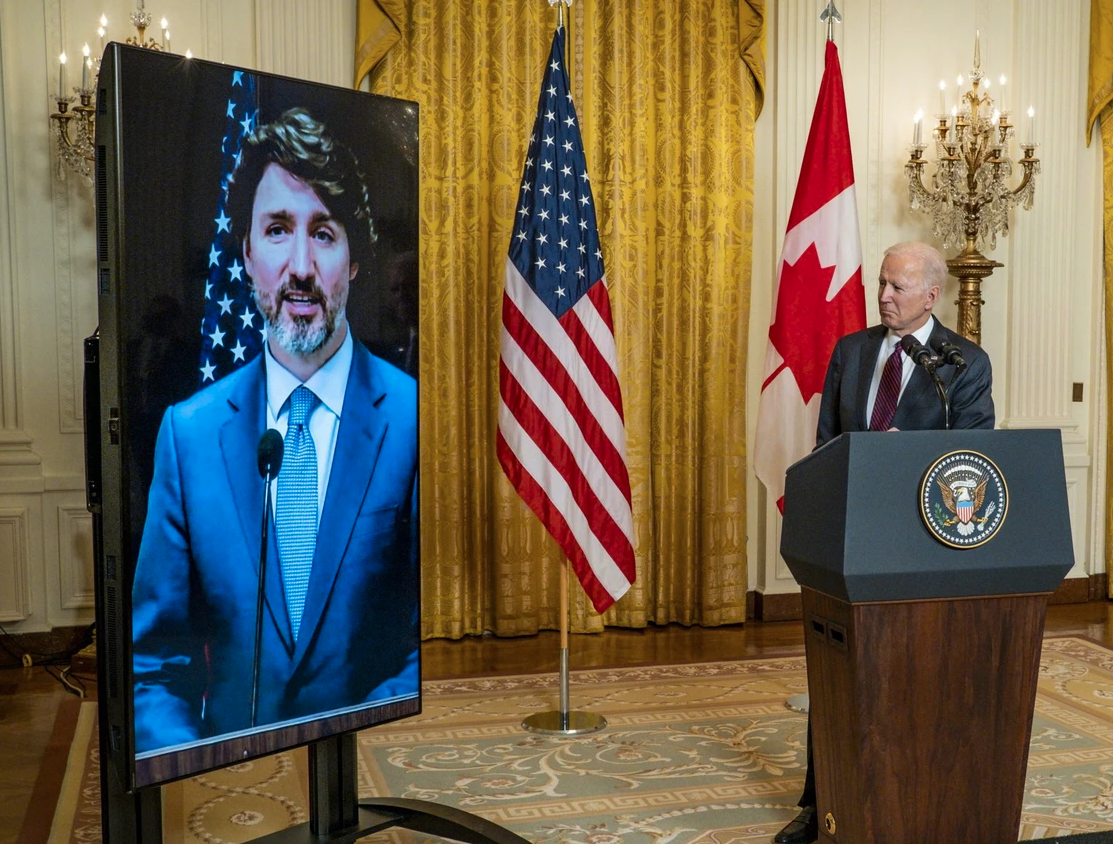 My latest: Joe versus Justin

As of this week, that’s how long Joe Biden has been President of the United States.

Justin Trudeau, meanwhile, has been Prime Minister of Canada for 2,000 days.

One hundred days versus two thousand days: who is doing better?  Who is the better leader?

Now, this writer worked on the Biden campaign for many months.  And you might say I haven’t exactly been the head of the Trudeau fan club.  But by any reasonable standard – by any objective measure – Joe Biden is doing much, much better than Justin Trudeau.

Take the pandemic, for example (please).  People have been bombarded by lots of statistics over the past year and a bit.  Lots of partisans have played games with pandemic and vaccine-related statistics, contributing to no shortage of cynicism and disbelief.

So, let’s just look at the pandemic facts.  No spin, no adjectives.

Biden came into the office of the president promising to vaccinate 100 million Americans in his first 100 days.  But he didn’t do that, at all.  Not even close.

No, he more than doubled that.  Biden’s administration blasted past the 200 million figure a couple weeks ago, and it did so well before the 100-day mark.  So, the Democratic leader’s vaccinated more than 60 per cent of Americans.

Over a longer period of time, Justin Trudeau has procured enough vaccines to give at least one shot to more than twelve million Canadians.  Just over 30 per cent.

So, Biden is doubling what Trudeau has done in vaccinations, in a much shorter time frame.  But only one vaccine dose gives you only partial protection.  What about the figure that really counts, those who have been fully vaccinated?  It’s here that Biden crushes Trudeau.

In Biden’s America, nearly 100 million Americans have been fully vaccinated.  That’s 30 per cent of the population of the United States.

In Trudeau’s Canada, only slightly more than a million people have been fully vaccinated.  That’s about three per cent of our population.

That’s the pandemic.  What about the other key indicator in our lives, the economy?  Here, too, Biden’s 100 days easily eclipses Trudeau’s 2,000 days.

In his first 100 days, Biden has approved legislation that cuts child poverty by more than half.  He has expanded Obamacare – and he has injected the U.S. economy with $1.9 trillion in stimulus spending.  That’s more than twice the size of what Barack Obama’s Congress passed a decade ago.

Economic growth in Biden’s America is expected to exceed seven per cent in 2021 – which is the best that nation has experienced since 1984, when Ronald Reagan was in office.  Under Biden, more than a million jobs were created last month alone.

In Canada, Trudeau oversaw mixed economic performance.  While 2020 ended with double-digit growth in Canada, corporate and personal bankruptcies grew here, too. Bankruptcies were up nine per cent from the previous year, with retailers being hit the hardest.

Trudeau’s latest budget, meanwhile, took two years to see the light of day – and then mostly disappeared.  While Trudeau has amassed the biggest budgetary deficit in Canadian history, his 2021 budget mostly unimpressed.  As the National Post’s Kelly McParland memorably (and accurately) put it: Trudeau’s budget “held the public’s attention for maybe 12 hours.”

Joe Biden, meanwhile, continues to hold everyone’s attention.  Far from being “Sleepy Joe,” as his political adversaries called him, Biden has been an animated and activist president.  In just 100 days, he has already achieved much.