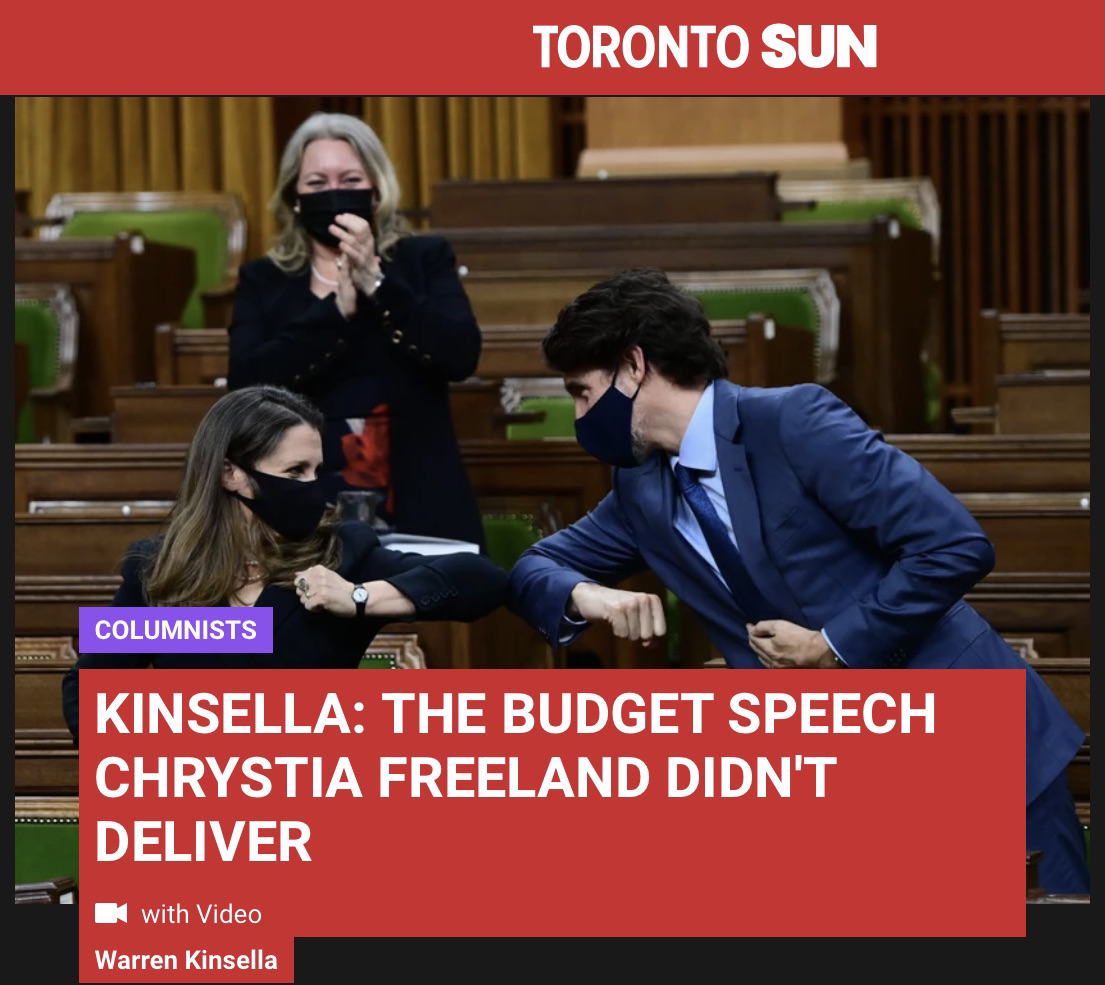 My latest: the budget speech Freeland should have given

“Mr. Speaker, I rise today to table the 2021-22 budget of the Government of Canada. The real one.

I rise to give the budget speech I should have given yesterday, but didn’t. Yesterday, I read out the speech that had been dictated to me by the children in the Prime Minister’s Office — privileged, solipsistic, white children who have a guaranteed paycheque, and who accordingly don’t care or understand what is happening to Canada.

So, I stayed up last night, and remembered that I was once a journalist, and I once cared for the truth. This budget, this speech, is the truth.

Mr. Speaker, we — the former Liberal Party of Canada, which has devolved into a personality cult — have failed Canadians. At the moment of the greatest need, at the time of our greatest peril, we have failed those we had sworn to serve.

Our sins are myriad and undeniable. We entered into a vaccine deal with the Chinese government — a government that has unlawfully imprisoned and is torturing two of our citizens — and pretended to be shocked when that deal fell apart.

When the immensity of our mistake became clear, too late, we stole vaccine doses from Covax, a program that was designed to provide vaccines to the poor of the world. We, a G7 nation, did that.

We permitted international flights into Canada bearing people who we knew — we knew — were infected with the deadly coronavirus. As I stand here today before you, Mr. Speaker, 14 such flights are landing at Pearson airport alone.

Most seriously, Mr. Speaker, we as a government failed to provide the one thing that could save lives, and save businesses, and save families. We failed to obtain enough vaccines.

Tabling a dishonest budget, as I did yesterday, made a bad situation worse. That document was an act of fraud.

How can we claim to be funding affordable child care, after so many decades of making the same promise, and then never delivering on it? How can we, in good conscience, urge Canadians to place their children in places where the virus and its variants, we know now, can flourish and infect?

How can we claim to be concerned with the plight of Indigenous people when we have broken our solemn platform promise to deliver clean water to them, the most basic human necessity?

How can we claim to be levying greater taxation on the wealthiest when our leader, and most of us on this side of the House, have never had to worry about defaulting on a rent or mortgage payment, or worrying about being unable to pay a utilities bill, or simply worrying about having enough left over to feed our children a healthy, sustaining meal?

Mr. Speaker, I do not wish to be known as the one who fiddles while Canada burns. I will leave that legacy to the prime minister.

Instead, my new budget has one single and single-minded focus: Vaccines.

We are blessed with low interest rates. That is the single reason why we have not had a total financial collapse before now. I therefore intend to use the financial might of the treasury — which is still considerable — to aggressively and relentlessly purchase vaccines, and build a vaccine capability in Canada.

And that is the policy I intend to pursue, whether the children in Langevin Block approve or not.