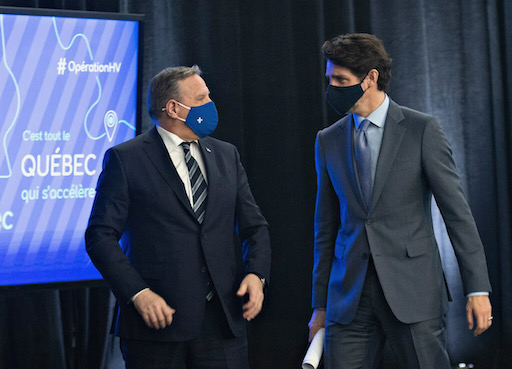 My latest: Operation Humiliation is in full effect

That’s kind of how Canada’s relationship with Quebec goes, sometimes. It has four steps, usually.

One, a separatist or crypto-separatist Quebec government falsely insists that Quebec has been “humiliated” in some way. Language, culture, religious symbols, whatever.

Two, they demand compensation — be it financial or constitutional. Never mind that the French language is stronger than it has ever been. Never mind that Quebec’s economy has been outpacing many other provinces for years.

Three, if facing resistance, the nation-wreckers move to the extortion phase. They issue the constitutional or fiscal equivalent of a ransom note. Do what we want, or Confederation is going to get a shiv between the ribs.

And then — unless the government is led by Jean Chretien (proudly, my former boss) or Pierre Trudeau (improbably, Justin Trudeau’s father) — Canada capitulates. It gives in to the phony humiliations, and the extortion. It folds like a cheap suit.

Being a millionaire, Justin Trudeau doesn’t wear cheap suits. But he sure knows how to fold like one. When the choice is discretion or valour, Justin will always choose the former. He will always look for the coward’s way out.

Thus, the latest installment in the ritual humiliation/compensation/extortion/capitulation rinse cycle. Quebec’s crypto-separatist government wants to change the Constitution to recognize Quebec as “a nation,” and crush the piddling anglophone minority in Quebec. Justin Trudeau’s response?

“Of course! Go ahead!” That’s what we heard this week from the Trudeau Party — because it sure as hell isn’t the party of Chretien or Trudeau Senior, anymore. Said the timid stripling who claims to be prime minister for all of Canada: “We agree with the Quebec government that more must be done to protect the French language.”

In French only, natch.

As my Sun colleague Brian Lilley reported, Trudeau was responding to questions about Bill 96, a 100-page legislative götterdämmerung cooked up by the regime of Quebec Premier Francois Legault. Legault demanded that Canada’s national government stay out of the way. And Trudeau this week agreed.

Full disclosure: Me and my family are Quebec refugees, kind of. The 1951 Convention on refugees defines refugees as “someone who is unable or unwilling” to return to their place of origin because they fear being discriminated against “for reasons of race, religion, nationality, membership of a particular social group, or political opinion.”

We’re all English-speaking Irish Catholics, and all of us, on both sides, were born in Montreal. And all of us — save and except one aunt and two cousins, who courageously refuse to be driven out — have left since the commencement of hostilities in the mid-’70s. When the anglophone minority started being actively discriminated against. For being anglophone.

We’re part of the English-speaking diaspora, now. My branch of the family landed in Calgary and became Albertans. Because Alberta doesn’t care where you come from. (And neither did Chretien, which is why I quit the law to work for him.)

How, you might ask, did all this happen? What changed?

What’s changed is this: Canada is led by a weak and easily intimidated Justin Trudeau, one who presides over a minority government during a pandemic. What better time to extort? Who better to threaten?

And Canada, as we know it, is going to be even less of a country as a result.