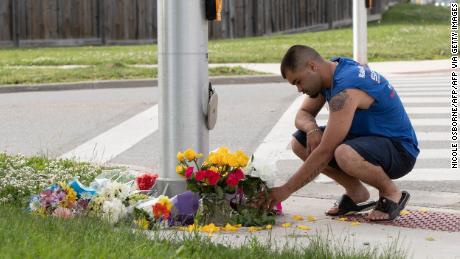 My latest: the haters

Right off the top, let’s all agree not to use his name. The alleged killer of the Muslim family in London, that is. With some crimes, that’s what the criminals so often want: to be named, to be remembered.  So let’s deny the killer that. But, as we try and find a motive for a crime as senseless, as evil, as this one, let’s also agree on this: there can be more than one motive. There can be more than one reason. The killer wanted notoriety, to be sure.  But what else could possibly be his motive, for a crime this horrifying, this cruel? We don’t know for certain yet. Bits and pieces are coming out, as they always do, in newspapers and on social media. Shocked neighbours are interviewed. Disbelieving former teachers, too. Family members are typically sought out for comment, but they often don’t know what to say. Understandably. But whatever we learn about the killer, and the killer’s motive, one thing is certain: he belongs to a certain demographic.  It’s one this writer has been paying attention to for three decades, because their ranks have been growing. Going back to my book Web of Hate in 1994, I started to notice a certain type of criminal thug committing a certain type of crime. And their ideology didn’t matter so much as their psychology. They’re not terrorists, often. Despite what Justin Trudeau claims, they’re not motivated by some political or ideological purpose. They’re just criminal thugs, and they hate other people. Often: • they’re male • they’re young (teens to early thirties) • they’re unsuccessful (at love or life) • they’re unemployed (often after post-secondary study) • they’re angry (at everything and everyone) • they’re alienated from family (who often have lost contact) • they’re involved in petty crime From skinheads to incels, these young men become incandescent balls of rage. They are looking for a replacement family, a new beliefs system, a sense of belonging, a higher calling, a culture that rejects the popular culture, a new religion, maybe even a uniform to wear. And along come manipulative older men, practiced in deception, who give them all those things. The old men give the young men a manifesto of hate. Now, desperate young men do desperate things, as we are now seeing – in London, Ont., in Quebec City, on Parliament Hill, on Yonge Street in Toronto. But these crimes are happening much more frequently, it seems, and with much more ferocity. Why? Well, social media doesn’t help.  It’s a cauldron of hate, too often, where hatreds flourish like dark weeds. Video games and popular culture, too: they nurture the notion that violence is a legitimate way of expressing oneself. But all of these young men share certain characteristics.  Despite the differing races and politics, they share motive. Why? Because they feel rejected by the mainstream. Because they feel they do not belong. Because they are shunned. So they leave civil society, and embrace a decidedly uncivil one. These young men turn to anti-democratic action precisely when they feel democracy has turned on them. Using violence to achieve political change is terrorism. But, Trudeau’s claims notwithstanding, the terrible events in London simply may not be terrorism. They truly seem what they they most often are: an angry, directionless young man, suffused with hate, who tries to destroy what he fears. Which, in this case, were some strangers who had what he did not – family, faith, love and a belief in humanity. [Kinsella is the author of several books on organized racism, anti-Semitism and extremism.]