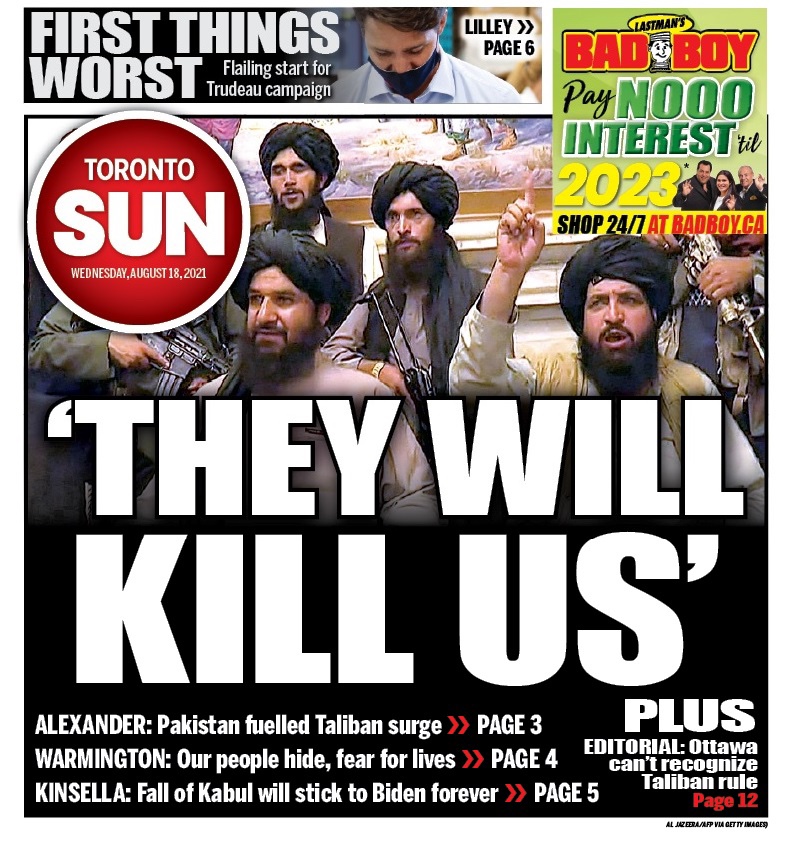 It’s easy to get into war.

Chuck Hagel said that, and he’d know.  Hagel is a much-decorated war hero, an ex-Senator, and the former Secretary of Defense in Barack Obama’s administration.

Hagel wasn’t perfect.  As a Senator, he voted to go to war in Iraq. He later admitted that was a mistake.

And, after 9/11 – the twentieth anniversary of which is just days away – Hagel voted to send troops to Afghanistan to fight the Taliban. As the war ground on, however, Hagel started to express concern.

And, fatefully, Hagel also said: “We can help [Iragis and Afghans] buy time or develop, but we cannot control their fates.”

By 2011, Hagel wanted to “start looking for an exit” in Afghanistan.  “We need to start winding this down, “ he said.

They, we, didn’t.  The war – which saw Canadian involvement from 2011 to 2014, and led to the deaths of 158 courageous Canadian troops – continued apace. Until Joe Biden.

Biden, like Donald Trump, had promised to end the presence of the United States in Afghanistan.  It was a popular promise for both men.  The Afghan conflict had been the longest U.S. war, claiming the lives of 6,500 fighters and a trillion American dollars.

But – and it’s a big but – Americans, and the world, expected that the withdrawal would be conducted in an orderly, safe and timely manner.  For those countries who sent young men and women to Afghanistan – many of whom would not come back alive – we expected the winding down of the war, as Chuck Hagel put it, to be done right.

In recent days, those of us in the West have watched events unfolding in Afghanistan in horror. The total collapse of the Afghan military.  Chaos and anarchy everywhere.  Terrible tragedies – such as Afghans literally falling off of departing planes, so desperate have they been to get out.

And, most ominously, the Taliban – the biggest and most feared terrorist organization in the world – now runs an entire country. Those who are knowledgeable about the Taliban foresee them returning to what they did so often in the past – repressing women, crushing dissent, and conducting terror attacks in the West.

The government of Justin Trudeau, practically alone in the civilized world, has refused to rule out recognizing the Taliban terrorists as a legitimate government.  Typically, Trudeau has also overpromised and underdelivered on rescuing those Afghans who assisted the Canadians who served there.

But it is the Joe Biden administration that has failed the most spectacularly.

Speaking to the nation this week in a televised address, the U.S. president was simply awful.  He blamed the Taliban victory on Afghans themselves – and he attempted to shift blame to his predecessors.  He sounded defensive, and chippy, and impatient.

Biden – who I worked for during last year’s presidential race – was decidedly unpresidential.

It gives me no pleasure to say that the Afghanistan fiasco will leave an indelible stain on Joe Biden’s administration.  Unlike John F. Kennedy after Bay of Pigs, or Ronald Reagan after the Iran-Contra mess, Biden didn’t take responsibility. He tried to shift blame.  He tried to dodge the truth.

And the truth, as Chuck Hagel also once said, is that it’s easy to get into war.

But it’s never easy to get out.