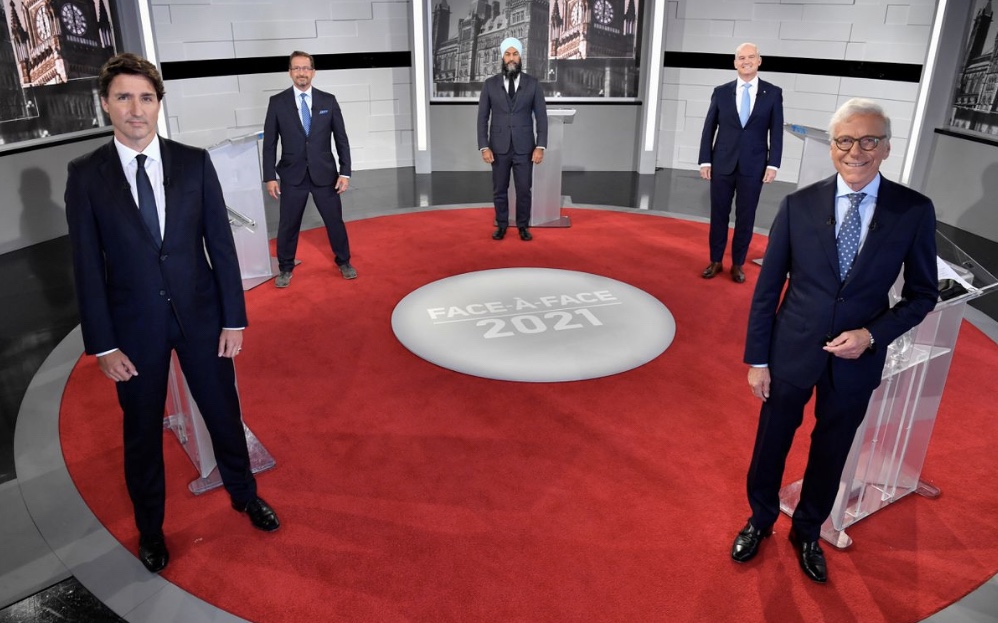 My latest: who won the debate?

Erin O’Toole won by not losing.

Justin Trudeau won by sounding authentic, for once.

Yves-Francois Blanchet won by being himself.

That’s this writer’s assessment of the first federal leaders debate, held Thursday night in Montreal. It was entirely in French, and fast-paced. But it made for compelling viewing.

The debate was organized by Quebec’s TVA network, and the moderation — by veteran broadcaster Pierre Bruneau — was simply excellent. Unlike what we are all likely to see in the English-language debate, the TVA show was well-done: Lots of important subjects covered, and very little over-talk.

The leaders, meanwhile, mostly performed well. When he speaks in English, Liberal Leader Trudeau is too often affected and phony. But in the French debate, Trudeau didn’t look or sound like he was acting. On subjects like vaccines and guns, he was passionate.

The Bloc’s Blanchet is an award-winning figure in Quebec’s entertainment and communications industry, and it showed. He has a broadcaster’s voice, and a performer’s style, and he clearly knows how to use the camera to his advantage.

The New Democrats’ Singh desperately needs Quebec voters to embrace the NDP, as they did overwhelmingly a decade ago under Jack Layton. But, based on Singh’s first 2021 debate performance, that’s unlikely to happen. The Dipper boss was low-energy for much of the debate, and really didn’t ever score any points.

O’Toole, however, did — and not just by showing up. The Tory leader’s French was much better than many Quebec commentators expected. And he clearly surprised the other political leaders, too.

The expectations for O’Toole were as low as they can get — just as they were before this unnecessary, unwanted election kicked off. But he didn’t merely play defence in the debate. O’Toole was aggressive, at times, going after Trudeau on the appalling Liberal record on sexual harassment and treatment of women.

Trudeau was left blinking and sputtering throughout much of what the moderator Bruneau noted was the “MeToo” segment of the debate — because O’Toole put Trudeau on the ropes, and kept him there.

All of the opposition leaders hammered Trudeau on the election call itself, too. As in the rest of Canada, Quebec voters are mystified — and angry — that Trudeau called an election during a fourth wave in the deadly COVID-19 pandemic.

As has been the case so far in the 36-day election, Trudeau was simply unable to come up with a compelling narrative for triggering an election two years earlier than he needed to.

But the debate wasn’t all bad for the Liberal leader. Watching him, no one should be surprised to see Trudeau continuing to hammer away at the vaccination issue in the remainder of the campaign: On Thursday night, he was effective on it.

Trudeau clearly feels O’Toole — who has an undisclosed number of unvaccinated Tory candidates, and has been blasé about it — is vulnerable on vaccines. If Trudeau goes neg in the remaining days, it’ll likely be on the hot topic that is vaccines.

For those who are dismissive about the French-language debates, keep this in mind: In 2019, Blanchet became far more popular after turning in strong French-language performances. And the resulting Bloc surge helped to rob Trudeau of his majority government.

Remember this, too: O’Toole needed to show that he could be prime minister for all of Canada, not just Western Canada.

Based on his first debate performance as Conservative leader, he did that and then some.

And that’s why he, more than Messrs. Trudeau or Singh, was the winner.