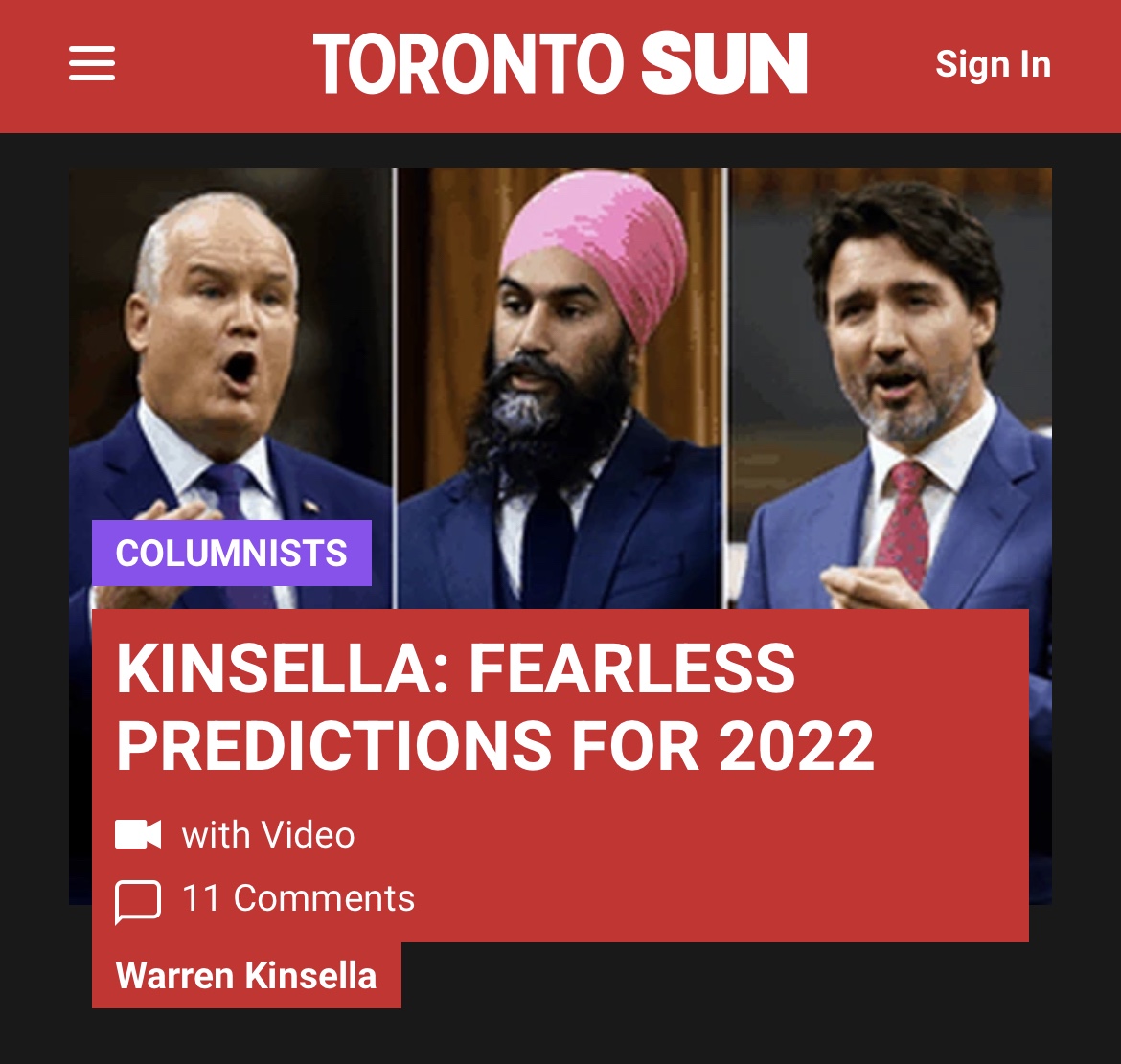 My latest: fearless predictions to disregard!

Well, those of us in the predictions business have learned — the hard way — that things that haven’t happened may, um, never happen. The future is indeed unwritten, as Joe Strummer of the Clash liked to say.

But here’s some predictions anyway. If I’m wrong, I’m counting on all of you to gather around my stool at the Midtown Brewery in Prince Edward County and remind me. I’ll buy.

Justin Trudeau: He’s gone into the witness protection program since the election, and his Liberal Party is accordingly up in the polls. That should tell Liberals — even him, the ostensibly top Liberal — something. Assorted ambitious Grits are pawing the dirt, waiting for the starting gun. But, to mix metaphors, will Trudeau go for the proverbial walk in the snow in 2022? My hunch: No. Every leader prefers to leave on a high — and, until the pandemic fades from memory, Justin is staying put. He wants to be remembered for sunshine, lollipops and sunny ways — none of which have been in abundance, lately. (Besides, those of us in the columnizing business want him to stay. He’s the worst prime minister in memory, and he gives us stuff to write about.)

Erin O’Toole: The Conservative Party doesn’t know what it is, it doesn’t know what it wants, and it doesn’t know where it’s going. As such, O’Toole is the perfect Tory leader: He doesn’t know any of those things, either. O’Toole arguably isn’t human: He’s a colour, beige. He belongs on a wall in a government waiting room, not in Parliament. What does he believe in? What does he care about? Who knows. This is seen in O’Toole’s tendency to have multiple positions on single issues. Carbon taxes, assault weapons, abortion, gay marriage, vaccinations: On the stuff that matters, O’Toole is in tatters. That said, he’s unlikely to be jettisoned by his party before the next election: As noted, Tories don’t know what they want or need, and — until they do — he’s safe at Stornoway. Doing whatever it is he does.

Jagmeet Singh: With the notable exception of Tom Mulcair — who, while a dislikable rageaholic, arguably deserved a second chance — New Democrats are enthusiastic about losing. It comforts them, like an old blanket, because it is all they have known. Case in point, Singh’s former boss at Queen’s Park in Ontario, whatsername. She’s decisively lost three (3) elections in a row, and her party still sticks with her. That’s good news for Singh, who is the part-time federal New Democratic Party leader, but the full-time enabler of Justin Trudeau’s every legislative desire. It’s the best job Singh’s ever had: He’s not going anywhere anytime soon, either.

The Damned Virus: I was talking to a psychiatrist friend, recently, to ascertain what people were feeling about the Omicron variant and what it has done to the holiday season. “They’re pissed off,” said he, using expert psychiatrist terminology. “They believed in vaccines, they played by the rules, and they feel angry and depressed that things are worse than ever before.” All that is true, but this writer verily believes this is true, too: For COVID-19, Omicron is good news and bad news. It’s good for COVID because it is so wildly infectious. But it’s bad for the pandemic, too, because Omicron may signal that COVID is mutating itself out of existence. As my smart health-care politico pal Dan Carbin told me this week: “This has been the end game (all) along. Viral mutation to an infectious, but mild, virus. Like the other four endemic coronaviruses, all of which likely killed a lot of people when first introduced. The last was likely the flu of the 1889-91, which killed one million. And is now a cold.”

That’s my big prediction. And if I’m wrong, come find me on my stool at the Midtown.

But don’t forget your mask and vaccination passport!

— Warren Kinsella was Chief of Staff to a federal Liberal Minister of Health.