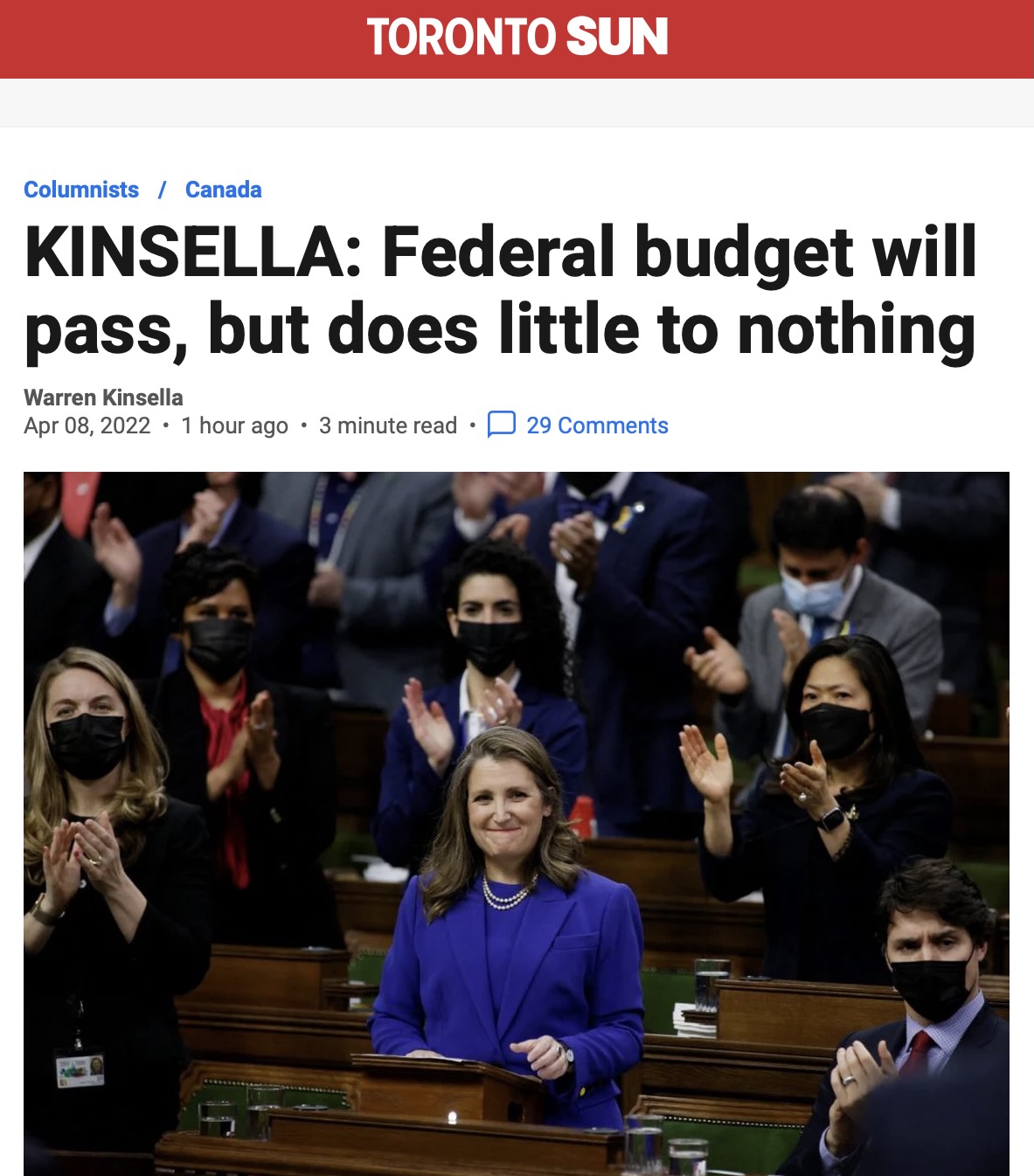 Here’s one thing we know for certain about this week’s federal budget.

That’s a line from veteran NDP strategist Karl Belanger, and it is both (a) true and (b) funny. True, because the Jagmeet Singh New Democrats and the Justin Trudeau Liberals are indisputably, now, the Axis of Weasels – a coalition NDP-Liberal government, wherein the former will keep the latter in power for years to come.

Belanger’s line is also funny, but the joke is on us. Because, if you were hoping for a federal budget that meaningfully improves your life, folks, you’ll need to keep looking. Because the 2022 budget – nominally Chrystia Freeland’s, but really Jagmeet Singh’s – really won’t.

Everyone is anxious and on edge, this spring, and the Three Horsemen of Anxiety are to be seen everywhere, galloping hither and yon: a pandemic that is getting worse, a war in Europe that is getting more horrific, a wave of inflation that is at a 30-year high.

And, if you were hoping the Axis of Weasels budget would truly address any of those things, you will be disappointed. Let’s deal with each Horseman individually.

COVID-19: The Horseman of COVID is rampant in Canada, with as many as 120,000 Ontarians getting infected every single day. The 2022 budgetary pandemic response? To do less, not more. “Our ability to spend is not infinite,” said Freeland, which is news to Trudeau-watchers – and which will certainly enrage the provinces, who desperately need assistance to fund the ongoing fight against COVID. Now.

War in Ukraine: As is well-known, Vladimir Putin is truly a Horseman of the 2022 Apocalypse. To oppose Putin’s genocidal war in Ukraine, Freeland had one job: to meet our NATO spending commitment. Our allies have asked us to do that, NATO has asked us to do that – Hell, Barack Obama appeared in Parliament back in 2016 to give a speech and say that: “NATO needs more Canada.”

Well, pleas from Obama, Ukraine and NATO went unheeded in the 2022 budget: Freeland, Trudeau and Prime Minister Singh could not bring themselves to even meet our piddling two per cent of GDP target. Not even that.

Inflation: The third and final Horseman of the 2022 Apocalypse is inflation, and Freeland at least acknowledged it. Because inflation is picking the pocketbooks of Canadians from sea to sea to sea.

The result? Around $1.2 trillion in debt, and a black hole where the Chretien-era balanced budgets used to be.

In fairness to Prime Minister Singh, this needs to be said: on Parliament Hill – which is a few city blocks surrounded by reality – far too much fuss gets made about budgets. Those of us in the media, and in cloistered political circles, get really worked up about them, but real people don’t.

Joe and Jane Frontporch – the ones who are buffeted, every day, by the aforementioned Horsemen of COVID, war and inflation – couldn’t tell you three things that were in the last federal budget if you gave them a billion dollars (which Messrs. Singh and Trudeau just might do, if you give them a chance). Because, in Ottawa, it’s always just Ottawa talking to, for, and about Ottawa.

On those things, the first Axis of Weasels budget did little to nothing.

Which, among other things, is why its authors are weasels.

— Kinsella was a special assistant to Jean Chretien