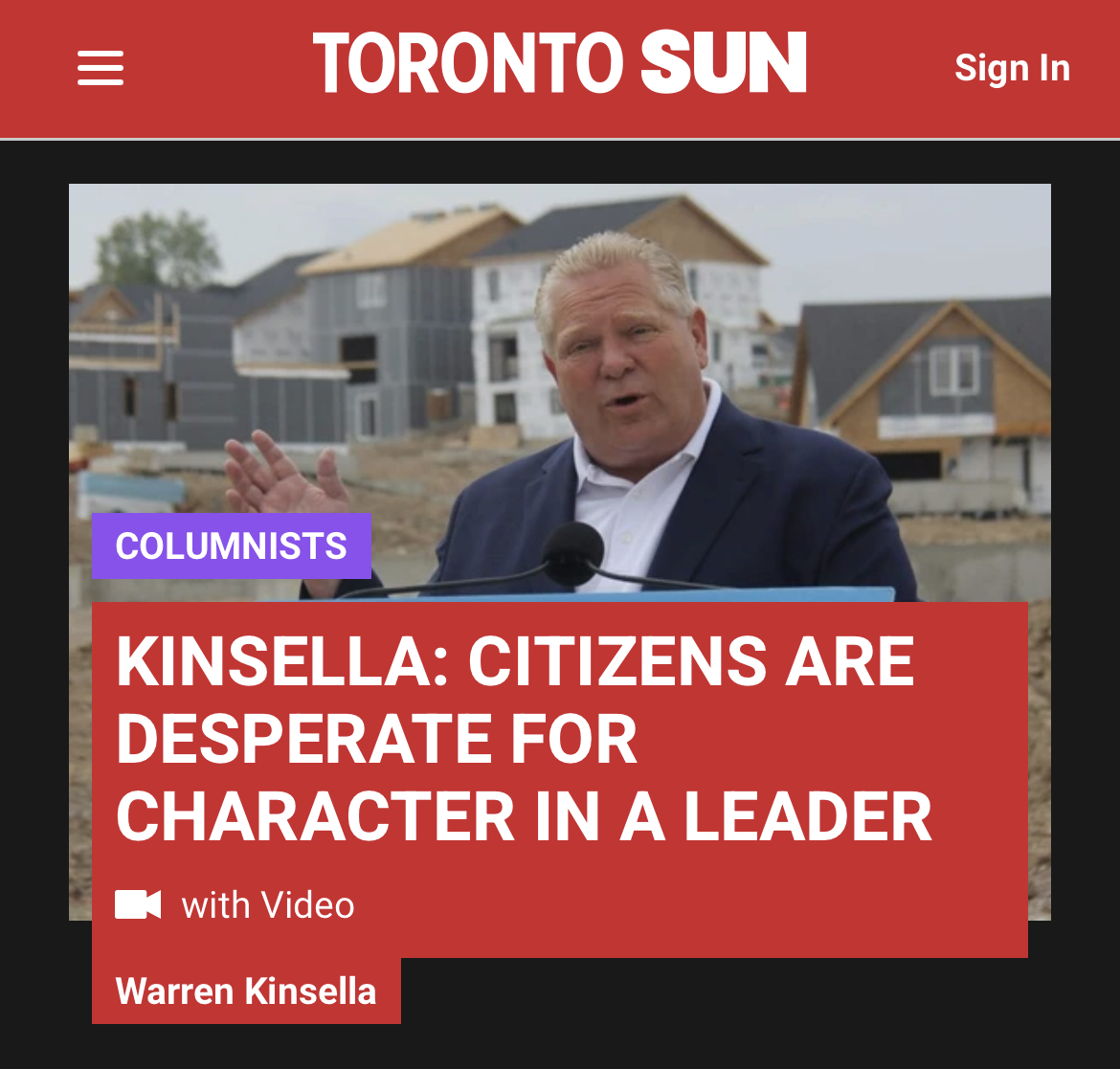 When does a politician’s character get revealed?

Because, as Ken Dryden once memorably said about hockey, character doesn’t get built by the political life. It gets revealed.

Our history is full of those unplanned, unscheduled moments when a leader’s character is revealed. During the October Crisis, when Canadians were terrorized by separatist murderers, Pierre Trudeau famously said: “Just watch me.” And Canadians watched, and rallied to him.

When Conservatives and Paul Martin acolytes were hissing that Jean Chretien was too old, and yesterday’s man, my former boss literally jumped on a single water ski – and figuratively flipped his enemies the bird. Canadians laughed, and rallied to him.

And when he was elected a minority Prime Minister, the very first thing Stephen Harper did was apologize for abuses at residential schools, and announce compensation. Canadians nodded, and would go on to support Harper for nearly a decade.

By the by: Harper did that notwithstanding the braying and screeching of Pipsqueak Conservatives like Pierre Poilievre, who had insinuated that Indigenous people were lazy and dishonest. That was a moment when character was revealed, but perhaps not in a way that Poilievre would like.

All those things (and more) show character, and reveal a leader’s better nature. That’s what voters are looking for. That’s what citizens are desperate for. Character.

Doug Ford’s character was revealed early on in the pandemic, twice. Neither were momentous occasions that will be written about by historians for decades to come. But they told a story.

In April 2020, when COVID-19 was rampaging and killing innocents, Ford held a press conference. He looked profoundly sad and sombre. He said: “You deserve to know what I know when you’re making decisions for yourself, your family and your community.” And Ford gave Ontarians the grim facts about COVID infections and deaths – something that he would go on to do on a near-daily basis for the next two years.

And in the same week, someone snapped a cell phone shot of Ford helping to load a donation of surgical masks at a dentist‘s office in Markham. No political aides or official photographers captured it. It was simply Ford, making an impromptu decision to help out himself. Personally.

More recently, Ford’s character was again seen in a positive light: when extremists and anarchists occupied Ottawa, and barricaded the borders, it was Ford – not Justin Trudeau – who first declared a state of emergency, who first beefed up police presence, and who first cracked down on the lawlessness. Lawlessness, by the by, that the aforementioned Poilievre had supported. And still does.

For Ontarians who remembered the old Doug Ford – the one who was often forced to angrily defend his brother’s many lapses – the new Doug Ford was a surprise. The new Doug Ford showed character, and he attracted the support of people who thought they would never give it – including people like my friend, top lawyer Marie Henein.

In a much-discussed column in the Globe and Mail, Henein – no knuckle dragging Conservative – said: “Doug Ford is the leader Ontario needs.”

Many agreed with her, and still do. During the pandemic, Ford was not perfect, as he himself admitted many times. But as the likes of Henein also noted, he did a far better job than many expected.

Doug Ford revealed himself to be a good and decent man.

And one who most of us feel deserves reelection.