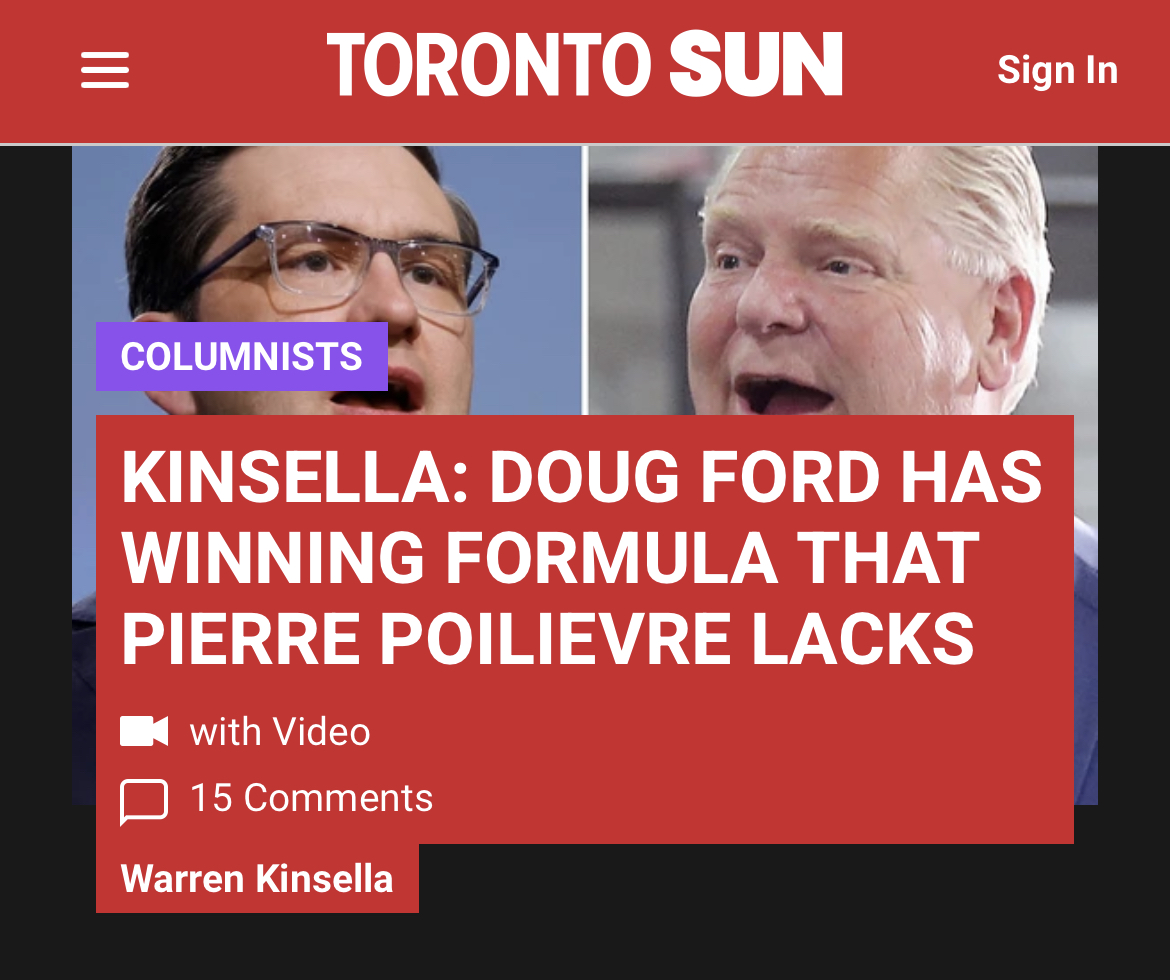 My latest: Doug vs. Pierre

This is a tale of two “Conservatives.”

We say “Conservative” in quotation marks to make a point. And the point is this: Doug Ford and Pierre Poilievre may be notionally, nominally “Conservatives.” But they are very, very — very — different.

And, for both men, it’s a very big political week.

On Thursday night, Ford is going to be re-elected as Ontario’s premier, possibly with a bigger majority than he got four years ago. And, on Friday, Poilievre is going to start adding up the many memberships he sold during the federal Conservative leadership race.

But, in the long term, Ford will be remembered as the winner of this pivotal week. Poilievre, not so much.

Ford will hold onto power in Canada’s largest province for three reasons.

One, he wildly exceeded expectations. Four years ago, Ford’s critics predicted he would crash and burn, and that he would continue to be the pugnacious Toronto city councillor — the one who was often compelled to defend the misadventures of his brother Mayor Rob Ford. And, during the early days of his government, Ford was indeed combative.

But then, he made big changes. Ford replaced his chief of staff with the genial and professional Jamie Wallace, one of our (full disclosure) former editorial bosses at the Sun chain. He shuffled his cabinet. And then he, the man himself, changed.

It was the pandemic that did it, mostly. Ford jettisoned the angry ideological conservative stuff — a pose that never really suited him, anyway. Like many others, Ford accepted that government had a right and proper role during a deadly pandemic.

Caring for the sick. Comforting the frightened. Spending to keep businesses and families afloat. Ford accepted that all of those things could only be done by government — not the private sector. And he became the face of government here in Ontario.

Two, Ford resisted the temptation to politicize the pandemic. At his near-daily press conferences, Ford adopted a compassionate tone. He jettisoned partisanship, often lauding his political opponents, like Prime Minister Justin Trudeau. And he seemed to be feeling, personally, the grief that too many families were experiencing. He was human, in short.

Thirdly, Ford stuck to the facts. He didn’t speculate. He deferred to his experts. When he didn’t know something — unlike too many others, such as Donald “Inject Yourself With Bleach” Trump — he said so. And when Ford made a mistake, as with the misguided decision to shut down playgrounds and give police powers they didn’t need nor want, he quickly admitted it and changed course.

Playing against type. Being kinder, gentler. Working with others. Making positive personal changes. Being as apolitical as possible. Being factual. Avoiding conspiracy theories and wacky policy.

All of those things Doug Ford did — and that is why he is going to win big again.

And none of those things Pierre Poilievre has done. None. And it’s why, when the federal election finally happens, Poilievre — as Conservative Party leader — will lose.

As many have noted, Poilievre has been simply vicious with other political players — players who are members of the same political party. He has politicized everything, offering precious little policy ideas. He has embraced conspiracy theories (like the one about the “globalist” World Economic Forum) and nutty pledges (like his opt-out-of-inflation with cryptocurrencies that are in freefall).

And, most of all, Poilievre hasn’t addressed his key weakness — that he is an angry little man, one who is the adenoidal voice of a feral stew of anonymous Twitter trolls, antigovernment extremists, and law-breaking convoy types. Instead of showing a kinder, gentler side, Poilievre has gotten more dyspeptic and antagonistic.

Pierre Poilievre will ultimately lose because he isn’t.