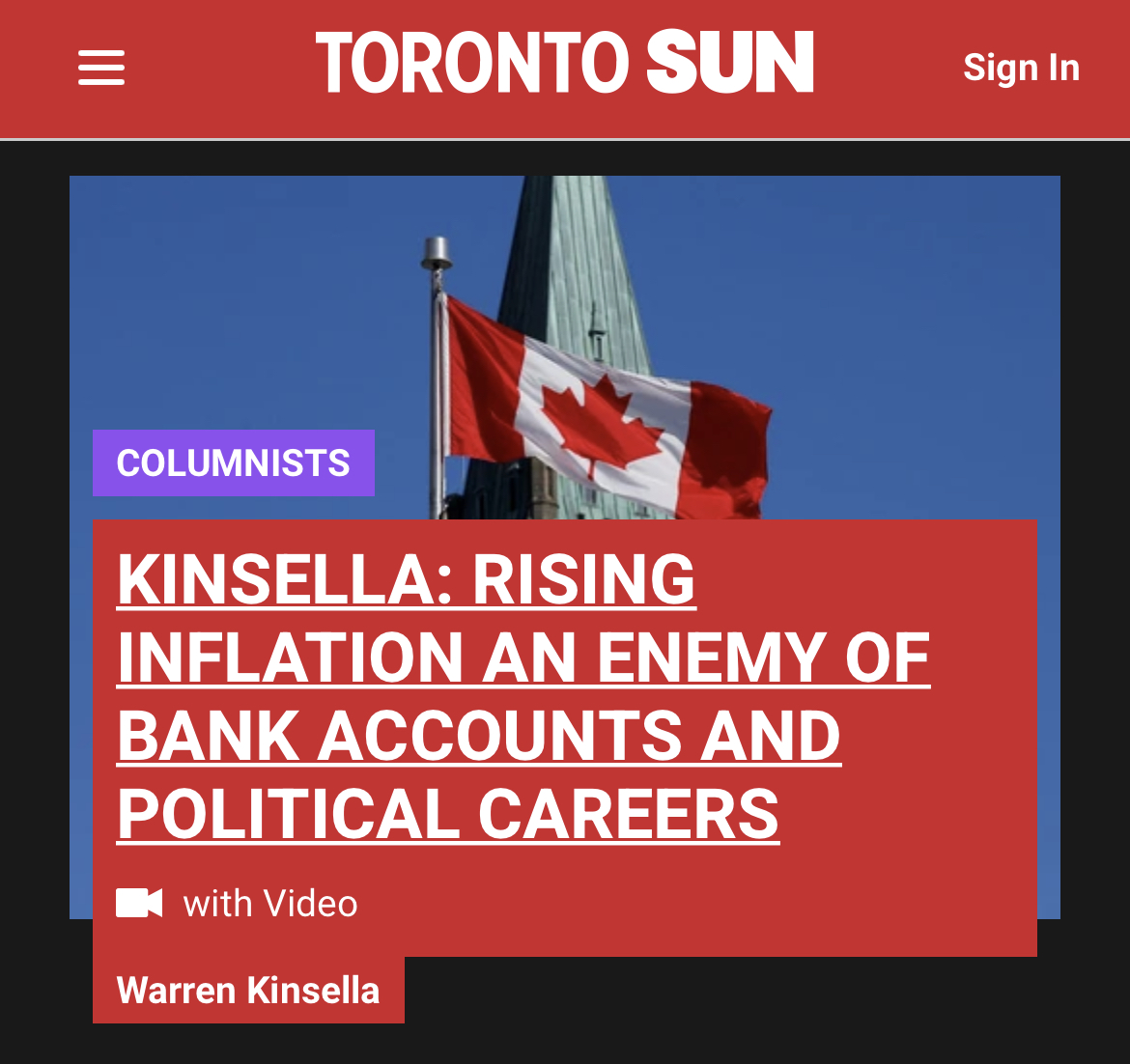 My latest: rates up, everything else down

On Wednesday, the U.S. Federal Reserve did something it hasn’t done in nearly three decades: It raised interest rates by three-quarters of a percentage point. That’s the biggest rate hike since 1994.

Anyone who thinks that the Bank of Canada won’t do likewise in July is dreaming in Technicolor. The only question is how much.

In recent months, the Bank of Canada has boosted its key interest rate by a half a point twice — moving the borrowing rate to 1.5%. For all of us who borrow — to purchase a home, or a car, or lines of credit, or credit cards, or student loans — those interest rate hikes have a meaningful and measurable effect on the bottom line.

Austrian economist Ludwig von Mises — who, tellingly, fled Europe to escape the advance of Nazism, and would go on to influence generations of economists — once said: “Public opinion always wants easy money, that is, low interest rates.”

But easy money is getting increasingly less easy to get.

Why raise rates, you ask? Well, the economy, as the experts say, was too hot. Inflation was higher than its been in decades.

Unleashed from the strictures of the pandemic, consumers started spending like the proverbial drunken sailors, pushing prices of just about everything up. Inflation — that is, a drop in the bang you get for your buck — was back, with a vengeance.

Inflation was made worse by factors that were myriad and multiple. Russia’s insane invasion of Ukraine. Supply-chain chaos. Labour and housing shortages. Rising prices. And fear of yet more rate hikes. As Joann Weiner, an economics expert at George Washington University, inexpertly observed: “It’s a pretty bad storm.”

Pretty bad indeed. And where there is bad news, nervous politicians can sometimes be observed, tip-toeing away from the danger zone, trying their utmost to go unnoticed. For example: Has anyone seen Prime Minister Justin Trudeau lately?

For many politicians, rising interest rates — and rising inflation — can be existential. In the late ’70s and ’80s, the oil crisis, government spending, and higher prices ended many political careers — President Jimmy Carter and Prime Minister Pierre Trudeau among them. (Trudeau bounced back, but Carter never did.)

In Canada in the New Twenties, the dominant political issue is the cost of living. That issue, more than any other, is driving the political agenda, and causing no shortage of disingenuous finger-pointing.

In the U.K., rising fuel prices have prompted a cynical “windfall tax” on energy companies — and Spain and Italy are likely to follow suit. That sort of stunt won’t assist any consumers. (But reducing taxes on the price of gas, as Alberta recently did, will.)

Federally, the coming interest rate hikes will play an oversized role in the futures of Liberal and Conservative politicians. If the Bank of Canada overplays its hand, and pushes the country into recession, Conservative leadership frontrunner Pierre Poilievre — who has recklessly promoted InfoWars-style conspiracy theories about the central bank, and childishly called for its governor to be fired — will almost certainly benefit.

As Canadians grow angrier about the state of the economy, and as they feel more and more powerless about rising rates and inflation, Poilievre may reap the rewards.

Trudeau and his Liberals, however, will not. It’s been apparent for some time that the prime minister and his inner circle do not have the faintest clue what to do about an economy that is super-hot and looks like it could implode. As my Sun colleague Mark Bonokoski noted recently, the Trudeau government has insisted that inflation was “transitory.”

Well, it isn’t. And it’s getting worse.

The late, great Alberta political guru Rod Love once said to me: “When the water dries up, the animals all start to look at each other funny.”

The water, along with cheap borrowing, is drying up. So too consumer — and voter — confidence.

We human animals may be edging closer to an economic and political drought. Who will thrive? Who won’t survive?

Because, make no mistake: Politically, not everyone will.