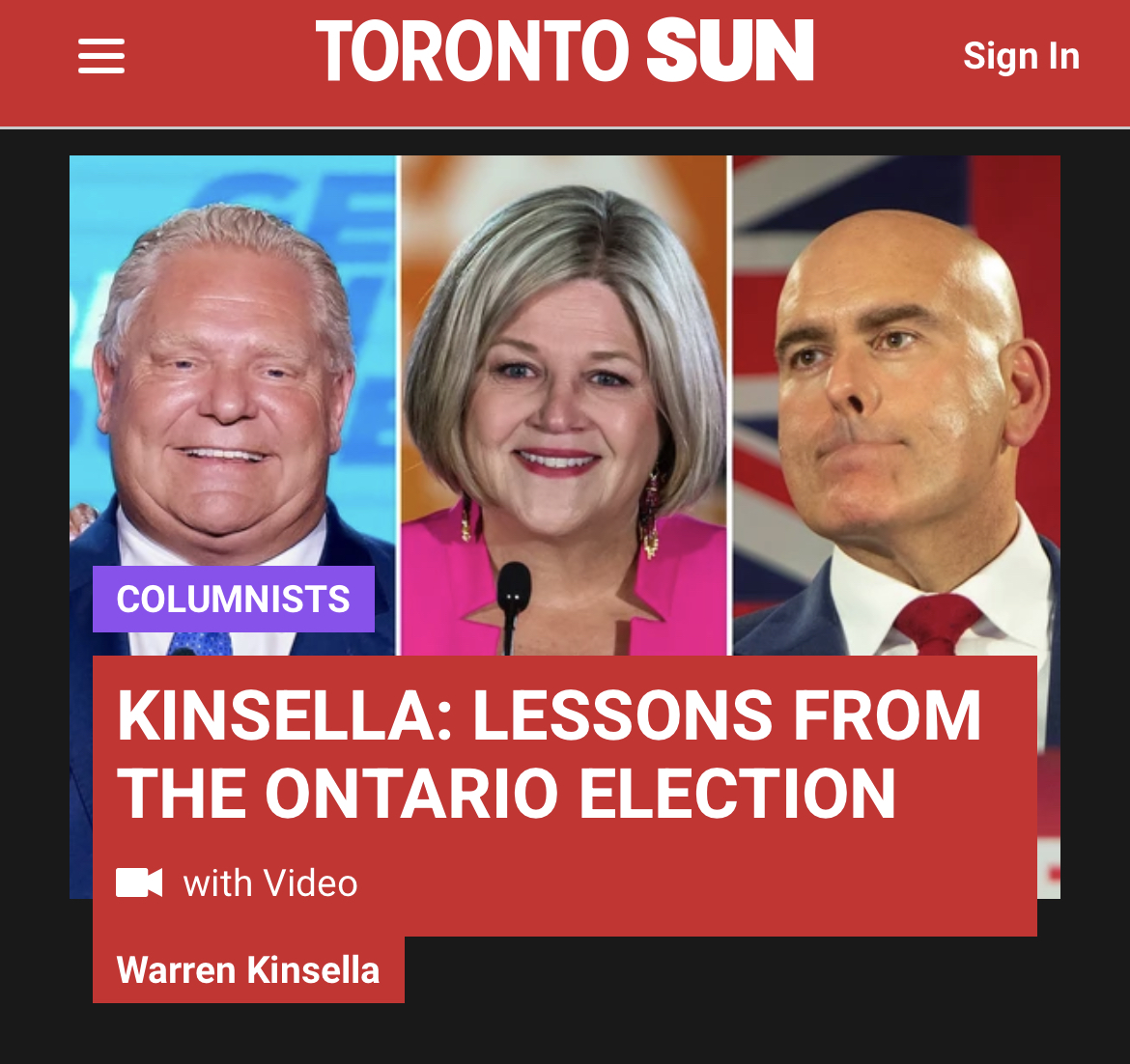 My latest: the morning after Doug Ford’s big night

Centrism matters: Ontario PC Leader Doug Ford stuck resolutely to the political middle, which — in Canada, at least — is where all the votes are. Liberal Leader Steven Del Duca yanked his party too far to the ideological left. Today, Ford is still premier, stronger than ever, and Del Duca has resigned, unable to even win his own seat. Pierre Poilievre should take heed, but won’t.

Reaching out matters: During his election night victory speech, Ford explicitly appealed to “federal Liberal” voters, saying he welcomed and needed their support. As the stunning results rolled in on Thursday night, it was apparent he already had it. Ford has created a political coalition that is ideologically broad enough to include those who traditionally vote for Justin Trudeau, and those who voted previously for Mike Harris. That is an extraordinary political achievement.

Personality matters: Ford’s campaign message — Get It Done — was meaningless. Get it done? Get what done? By whom? When? What worked, instead, was Ford himself — he has honed an affable, amiable political persona that is populist in the true sense of the word: People can picture having him over for a barbecue, and they know he’d help clean up at the end.

Visuals matter: Visually, Ford ran a campaign that was bright, buoyant and blue. Del Duca’s campaign, meanwhile, was sweaty and awkward, and Del Duca himself was ribbed for wearing a Walmart-style vest that was blue — his opponent’s colour! Visuals matter because voters receive most of their political information — and make their political choices — based on what they see and hear, not what they read.

Campaign competence matters: Del Duca lost multiple candidates to scandal because he and his campaign team didn’t bother to properly vet them. The resulting micro-scandals threw him off-message for days. In some ridings, the hapless Ontario Liberal leader simply had no one running for him. In Ottawa, meanwhile, Ford needlessly lost an incumbent candidate because his campaign team refused to let him be seen in the capital in the immediate aftermath of a devastating wind storm — a storm that left tens of thousands without power.

Leaders matter: Ford ran the table — getting re-elected with a second huge majority, and forcing the election night resignations of both his main opponents. NDP Leader Andrea Horwath arrogantly stuck around too long, and voters simply got tired of her. Del Duca, meanwhile, was never a leader — he was just a former political staffer and lobbyist, and it showed. He was incapable of projecting leadership and inspiring confidence. Ford, meanwhile, became a leader — and was re-elected — by his performance during the pandemic, where he wildly exceeded everyone’s expectations.

Friends matter: With progressive policies and the promise of work, Ford and his much-liked labour minister worked tirelessly to capture the support of trade unions — and they got it, much to the astonishment of Liberals and New Democrats. By making unions his friends, Ford dismantled the powerful Working Families coalition, and thereby hobbled the Grits’ campaign.

Campaigns matter: Campaign strategists like to say that, but it isn’t always true. Sometimes, the best-funded, best-run campaigns can flounder — while penniless, hapless campaigns can capture hearts and minds. Doug Ford won — and won for his party and team — because he is a HOAG: A Hell Of A Guy. He was the very centre of his campaign, and he has shown himself to be a likable, easy-going sort of politician, one who — like Ralph Klein, Mel Lastman, Rene Levesque and my former boss Jean Chretien — won by being a plain-spoken regular guy who can make a mistake and admit it. By being understood, by connecting.

Voting matters: More than ten million Ontarians were entitled to vote. Less than two million voted for the victorious PCs, and slightly more than a million each for the Liberals and New Democrats. That means only about 43% of eligible voters did so — a shockingly low number. If democracy is to have any meaning, that needs to change. Now.

— Warren Kinsella advised a trade union active in the election.