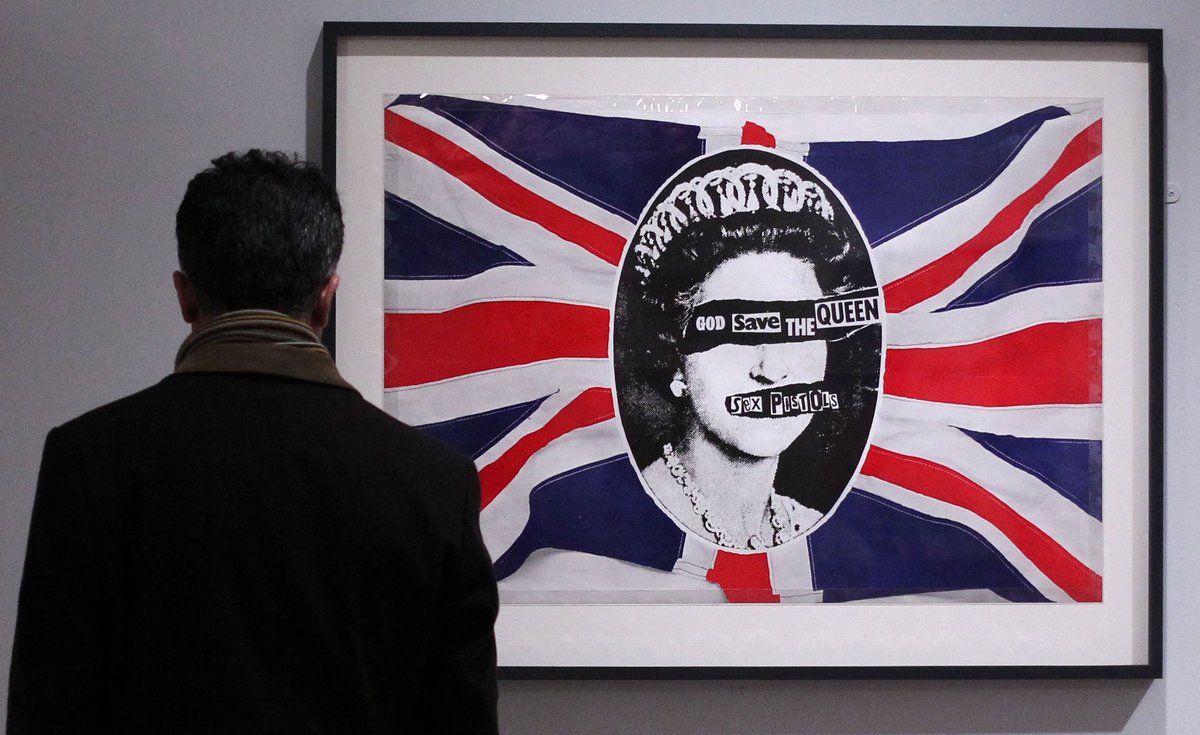 “God save the Queen,” Rotten howled, as the assembled Toronto fans howled back. “She ain’t no human being! And there’s no future in England’s dreaming!”

Rotten and his Sex Pistols – drummer Paul Cook, guitarist Steve Jones and pre-Sid Vicious bassist Glen Matlock – weren’t nearly as youthful as they once were, back when they released their ‘God Save the Queen’ single during the Queen’s Silver Jubilee, in 1977. It was 2003, many years later, and the Grey Pistols had reunited to play at the Molson Amphitheater, in an unashamed and transparent money grab.

Watching the band from the side of the stage, this writer – who still has an original pressing of ‘God Save the Queen,’ purchased at Kelly’s Records on the Eighth Avenue Mall in Calgary shortly after it was released – it was unclear whether Rotten et al. meant what they were saying. Were they anti-monarchists? Anarchists? Republicans? Johnny Rotten wasn’t giving any hints (yet).

Those in the Toronto audience weren’t wearing their anti-monarchist credentials on their tattooed sleeves, either. Sure, they knew all the words to the Pistols biggest hit – which reached number two on the BBC charts, even though the BBC refused to play it on-air – but they looked like they were mostly there for a good time, not some political time. Some, however, wore God Save the Queen T-shirts, complete with a safety pin through the regal lip. Not nice.

Right about now, the anti-monarchist forces are getting ready to do battle. It’s coming.

After the appropriate period of deference has passed, the hoi polloi will tear themselves away from their usual schedule – meeting at the Toronto Tennis Club to talk about poor people, or adding their name to a petition about climate change and the blanding turtle, while actually doing nothing about either – and compose a joint letter to the editor of the Globe and Mail, demanding an end to the monarchy in Canada.

Why? The usual arguments. They’re foreigners, the Royals are, and we Canadians can manage our own affairs, thank you very much. They’re unelected, and therefore undemocratic.

They’re too expensive to maintain, and they’re rich enough to support themselves. They’re unwanted by a majority of Canadians, 19 times out of 20, a poll will proclaim – a poll commissioned, and carefully crafted, by those same anti-monarchist types.

If we are being truthful, we have to admit: not every one of those arguments is spurious or without merit. The House of Windsor is, in fact, headquartered in another country. None of the Royals live in Canada.

And, yes, not one of them was elected to the positions and titles they hold – although we could probably make the same argument about Canada’s Senate, which (unlike the Queen) periodically attempts to replace the judgment of elected MPs with its own.

Are they costly to Canadians? Well, no. Canadian taxpayers didn‘t ever shell out a nickel to the Queen, although her portrait could be found on one side of said nickels. Nor did we ever pay her a salary. We do pay for Royal visits to Canada, however. (As we pay for most of the costs associated with visits by Presidents of the decidedly republican United States of America, too.)

Finally, should Canadians ever be consulted about whether we remain within the Commonwealth, whose leader is a King or Queen? Certainly. Sure. That’s what has happened in other countries.

Here? Well, in Canada, we are typically confused. Last year, Angus Reid (rudely) released a poll on the Queen’s 96th birthday. It found 51 per cent of us wanted to cease being a constitutional monarchy. But then the same poll found that many more – two-thirds! – had great affection for Her Majesty.

So will we become a republic? This writer – who was in Calgary punk band, and who regularly played a shambolic cover of the Pistols’ ‘God Save the Queen’ – personally thinks it’ll never happen. For starters, it means reopening the Constitution – and no one, save and except Quebec and Alberta separatists – wants that.

What’s more: both Liberal leader Justin Trudeau and Conservative leader Pierre Poilievre have this week pledged allegiance to King Charles, and solemnly reaffirmed our place in the Commonwealth. (Jagmeet Singh’s NDP has a different view, but no one cares what they think.) So, constitutional monarchists we shall remain.

And what of the Sex Pistols? Funny you should ask.

On the sad occasion of the Queen’s passing, someone remembered Johnny Rotten, who is a senior citizen and now lives in California. Tweeted Rotten: “Rest in Peace, Queen Elizabeth II. Send her victorious.”

Below that, Rotten posted that iconic image of Queen Elizabeth.

Except this time, she wasn’t wearing a safety pin.

[Kinsella was the founder of punk label Social Blemish Records, which he claims had more hits than zits.]