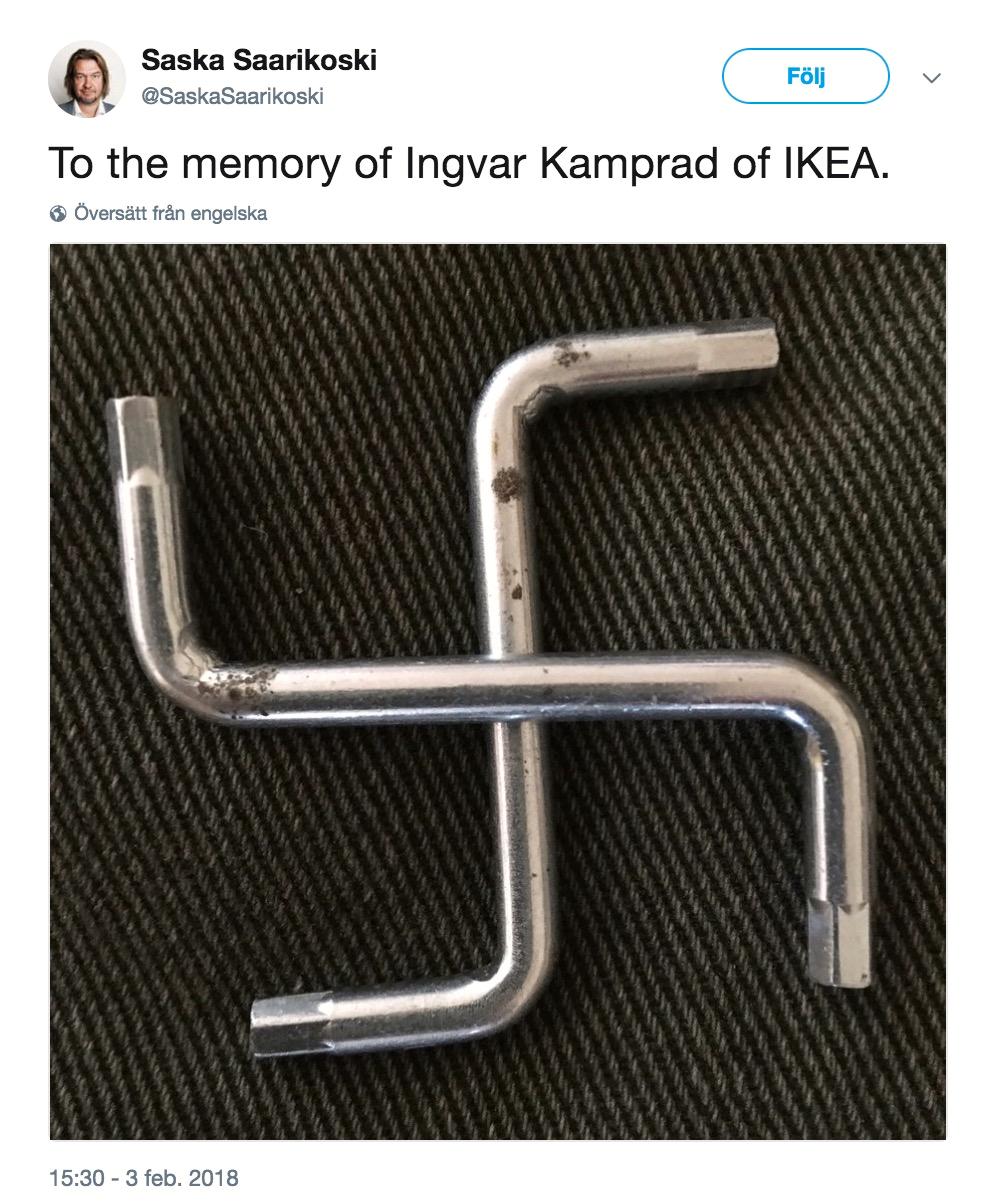 My latest: the beast is awake – everywhere

STOCKHOLM — Extremism comes on tiny feet. You almost don’t see it until it’s too late.

Take this IKEA, for example, on Regeringsgatan, near the old city of Stockholm. Here, tucked between grandiose 16th-century buildings and charming cobblestone streets, is another IKEA.

It’s just like the ones in Canada, found from Vancouver to Halifax. Everything’s the same. Same corporate colours, same stuff for sale, even the same meatballs and lingonberries. (Which are as ubiquitous as they are delicious, by the way.)

IKEA advertises everything from candles to pillows, but it doesn’t advertise one important fact: It was founded by a fellow who was an extremist. A neo-Nazi, in fact.

Oh, sure, IKEA doesn’t completely hide who their founder was. He was a genial-looking fellow named Ingvar Kamprad, who — says IKEA’s website— was “rebel-hearted.” Uh-huh. Ingvar had “a dream to create a better life for as many people as possible — whatever the size of their wallet — (which) is and will always be our driving force.”

Well, not exactly everyone.

Ingvar, who died in 2018 at the age of 91, wasn’t too fussy about foreigners, Jews and other minorities. He wasn’t so enthusiastic about “creating a better life” for them, actually. Ingvar was a member of the fascist New Swedish Movement. The IKEA website doesn’t have a whole lot of information about that.

Ingvar joined the New Swedish Movement when he was a teenager, even before he founded IKEA as a mail order company in his family’s backyard. The leader of the far-right group was rabid anti-Semite and Adolf Hitler fan Per Engdahl, who said Hitler was “God’s saviour of Europe.”

Historians record that Ingvar recruited members and raised funds for Engdahl’s pro-Nazi group, even while the Second World War was still raging. And he remained a confidante of Engdahl for many years after that.

When caught, Ingvar insisted his involvement with fascism was “a mistake.” But, in her wonderfully-titled book “Made in Sweden: How the Swedes Are Not Nearly So Egalitarian, Tolerant, Hospitable or Cozy As They Would Like to Have You Think,” author Elisabeth Asbrink wrote the Swedish security service had a bulging file on Ingvar titled “Nazi.”

And, as recently as 2010, when Canadians were still gleefully assembling IKEA bookcases with Allen keys, Ingvar told Asbrink that “Per Engdahl is a great man, and I will maintain that as long as I live.”

So, there you go. We are all sitting on couches that, at one point, funded Nazism. Extremism, in other words.

That’s relevant, these days, because there’s quite a bit of it to be seen just about everywhere you look. Not just Sweden.

Here in Sweden in September, the extremist Sweden Democrats took more than 20% of the vote in the national election, making them the second-largest party in the Riksdag legislature.

The Sweden Democrats trace their beginnings to this country’s neo-Nazi movement. They don’t particularly like Muslims or immigrants, and said during the election they favour giving foreigners “one-way tickets” back to Kabul.

To the extent that the world pays any attention whatsoever to Swedes who don’t play hockey, the huge success of a political party with actual pro-Nazi roots went more or less unnoticed. How come?

Well, because the beast is awake everywhere, pretty much. Extremism is to be seen in a lot of surprising places, these days.

Not, we hasten to say, in the policies of the parties led by Justin Trudeau or Pierre Poilievre or Jagmeet Singh. Not even in Poilievre’s Conservative Party, which may be conservative, but is on record as favouring the admission of more immigrants — and at a faster pace, too.

No, extremism is seen in less-visible ways.

When some people wave around a swastika flag during the Ottawa occupation, for example, and nobody does a damn thing to take it away from them. Or when white supremacist members of Diagolon are caught heading to the Coutts, Alta., border crossing with a cache of weapons, allegedly to murder police, and people shrug.

Or even when the richest man in the world gives a rabid anti-Semite like Kanye West back his Twitter account. After he said he was going to go “Def Con” on Jews. Or how Twitter blithely allows extremist threats against my Postmedia colleagues, and other journalists, all the time. All that.

So, we should probably give the Swedes a break, the fascist leanings of IKEA’s founder notwithstanding. They’ve got a problem with extremism, yes.

And, if we’re honest with ourselves, we increasingly do, too.