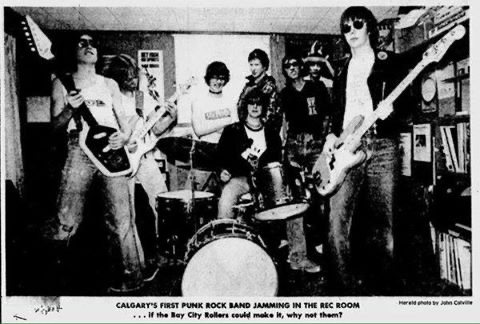 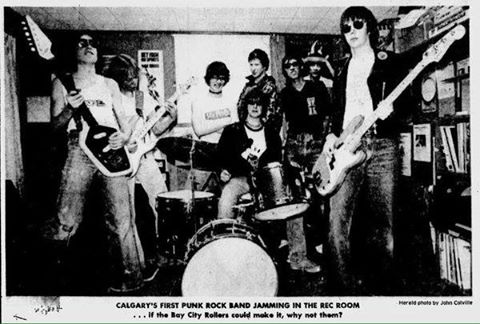 Forty-five years ago tonight, the Social Blemishes – me, Ras Pierre, Rockin’ Al and a few others miscreants – took to the makeshift stage in the gym at Bishop Carroll High School in Calgary for the first-ever performance of a punk band in our hometown. In all of Alberta, too.

And, besides: it was fun. Case in point: we even got our picture in the Calgary Herald, up above.  The guy on the far left (ahem) was John Heaney, who went on to be Rachel Notley’s Chief of Staff; beside him, Ras Pierre, now a multimillionaire engineer in Alberta (and my best friend, still); Yours Screwly, in shades, homemade Sex Pistols T-shirt and (seriously) a dog collar; Rockin’ Al, a standout stand-up comedian and performer; Allen Baekeland, later a DJ (RIP); Pat O’Heran, an award-winning Hollywood filmmaker; and, behind the skins, Ronnie Macdonald, another successful engineering technologist type, but in B.C.