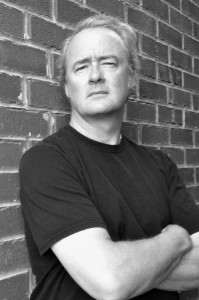 Warren Kinsella is a raconteur, bon vivant, and – occasionally – a Toronto-based lawyer, author and consultant. He is not profound, but it is said that he can be useful in a stick-swinging, bench-clearing brawl. He once wanted to be a Jesuit priest, but failed the entrance exam. Born in Montreal in August 1960, Warren has lived all over the place, but most often regards Calgary as home. Calgary is happy that he resides in latté-sipping, Volvo-driving, secular humanist Central Canada, with the rest of his smart aleck socialist pals. Warren has a bunch of kids, most of whom love Bad Religion.  (He adores them.)  He is also the human to Joey and Roxy.

Warren’s heroes are Malcolm X, Christ, Raoul Wallenberg, Bobby Kennedy, Cesar Chavez, Joe Strummer, and his father. He’s also pretty sweet on his Mom, who calls him twice a day, because she worries about him.

In May 2006, Warren set up a firm called the Daisy Consulting Group; his daughter liked the name, and that was good enough for Warren. Previously, he was Special Assistant to the Right Honourable Jean Chrétien, and chief of staff in a pile of federal ministries. He ran Chrétien’s war rooms in 1993 and 2000, and those did okay.  It was in the papers.

Stephen Harper has said that “I really think that Warren guy is on to something.”  Bob Rae calls him “a stupid blogger.” Peter C. Newman, meanwhile, has said: “Warren Kinsella can have an effect on as many Canadians as The New York Times.” We cannot publish what the knuckle-dragging, mouth-breathing, red-necked blogosweird say about him.

That last one contains exclusive interviews with Strummer, Joey Ramone, Sham 69, Eddie Vedder, the Buzzcocks, Joey Shithead, Blink 182, Stiff Little Fingers, Ian MacKaye, Bad Religion, Pennywise, and many, many swear words. If you buy more than five copies, Warren will come to your house and wash your car. The National Post called Fury’s Hour one of the best books of the year, which was uncharacteristically nice of them.  Meanwhile, his book on strategic communications and stuff like that, is called The War Room (Dundurn, 2007). The Toronto Sun called it a “must read.”  Nice.

His book Fight The Right, was published in North America in 2012 by Random House. The Hill Times called “one of the best books of the year.” The Huffington Post said it is “absolutely on the money” and “well worth picking up.” Former Stephen Harper campaign manager Tom Flanagan said: “Get the book.”  So get yours here!

Between 2017 and 2020, Warren wrote a trilogy called the X Gang Series: Recipe For Hate (2017), New Dark Ages (2018) and Age of Unreason (2019).  The series has been critically-acclaimed and best-selling, with Quill and Quire saying “suspenseful page-turner that also gives considerable food for thought, anchored in realistically drawn characters and an eye for significant detail.” Publisher’s Weekly said the X Gang story was: “riveting murder mystery…Tension starts high and stays there in unflinching page-turner.”  Globe and Mail liked ’em too: “Kinsella nails it without any stereotyping or embellishment..absorbing, jarring and raw.”  Booklist: “Kinsella’s book explodes off the page from the start…a dark and engrossing tale of punk-rock heroes fighting for justice.” Not bad.

Among other things, Warren has been a columnist for everybody from the Wall Street Journal to The Walrus to Postmedia. Presently, he writes for the Toronto Sun and appears on various shows.  He has a podcast, too, called the Kinsellacast. It’s here!

Warren’s also been a member of the executive of the Ontario Bar Association, and the Canadian Bar Association’s Communications Committee.  He’s been nominated as one of Canada’s top lawyers by Canadian Lawyer magazine.  And he has taught legal communications at the University of Calgary’s Faculty of Law, proving the old adage about those who can’t do, teach.

His favourite colour is black, even though black isn’t actually a colour.  He owns a shack in the County and a cabin the woods.  And he’s blessedly single.

Currently, Warren plays bass and hollers in a geriatric punk rock group called SFH. You can buy one of their latest fabbo waxing here.  The Toronto Star said this about it: “an enjoyably prickly and authentic throwback to London circa 1977, not to mention occasionally the Hamilton that gave us Teenage Head at around the same time.”

Previously, he played in The Social Blemishes, The Hot Nasties, Chicken Realistic and the Fabulous Kevins, S, The Trial Continues, The Mesleys, plus Sick Dick and the Volkswagens. We are not making this up, as much as we wish that we were.

This web site was established, quite a few years back, to counter attacks on Warren by neo-Nazis and white supremacists. After that, it became a place where some people would go to read some of the things Warren has written, or to allow them to contact him directly. Recently, however, it has become a bizarre farrago of political commentary, music reviews, and musings about the nature of human existence. It is also a website to which a lot of folks are inexplicably referred by Google, who are indeed evil.

If you are looking for Warren’s “blog” – and the statistics strongly suggest that you are – you can read it over on the “Musings” page.

If, however, you want to advertise with on this website, email Warren at wkinsella@gmail.com. Advertisers, take note: www.warrenkinsella.com receives up to six million visitors a year!”