Gobble gobble: who pardons who?

One has a flabby neck, is unattractive, makes unintelligible sounds, and has a very small brain. The other is a turkey. pic.twitter.com/nWavtNMMWf

Vaccine-gate: Brian Lilley and I discuss the latest

My latest in the Sun: the Brits and Americans are getting the vaccine soon – but not you

What if they developed a vaccine — and no Canadians were going to get it?

That, incredibly, seems to be the current reality: within days, Canada’s two closest allies — the United States and Britain — are poised to start providing their own citizens with Covid-19 vaccines.

Canada, in fact, can’t even say when Canadians are going to get the potentially life-saving vaccines.

This isn’t some story cooked up by Justin Trudeau-hating conspiracy theorists operating a website across the border. It’s a story that was first reported by the CBC, no less, which is rarely accused of being too tough on the Trudeau Liberal government.

“Two of Canada’s closest allies have laid out plans to distribute new vaccines against the deadly novel coronavirus, with the first shots expected to be delivered in December,” reported the CBC’s John Paul Tasker on Tuesday.

“Canada, meanwhile, has been largely silent on how promising vaccine candidates will be distributed here after Health Canada regulators give them the green light — providing few, if any, details beyond a promise to work with the provinces and territories and buy cold storage.”

The U.S. Food and Drug Administration (FDA) is meeting in two weeks to give approval to Pfizer’s coronavirus vaccine. That vaccine has been shown in drug trials to be effective with more than 90% of those who get it. Including seniors.

The FDA is expected to give the go-ahead to the shipping of the potentially life-saving drug the very next day. And millions of Americans will start getting their shots that same week. Twenty million Americans are expected to get the vaccine in December, and 30 million in January

In Britain, the story is largely the same.

The National Health Service has already identified more than 1,000 locations for Britons to receive vaccines. Staff are now on standby there to inoculate millions of British citizens, seven days a week — starting in the first week of December.

Sure, the National Advisory Committee on Immunization (NACI) came up with a list of those who should get a vaccine first. And the Trudeau government minister in charge of procurement declared that she plans to buy a bunch of freezers to store the Pfizer vaccine, which needs to be preserved in deep-freeze conditions.

But has Trudeau’s government given Canadians any sense — a clue, even — when we can expect to extend our arms for the vaccines?

Questioned by CBC — again, it’s the CBC that broke this scandal wide open, not the Conservative Party — Health Minister Patty Hajdu said it was “complicated.” She said the government hasn’t approved a vaccine yet.

Claimed Hajdu, who previously achieved notoriety for saying that the coronavirus risk to Canadians was low: “All of our departments are working right now, around the clock actually, on making sure we have a concrete plan with the provinces and territories, that we are ready to deploy the vaccines as soon as they arrive on Canadian soil.”

Feel better? Me neither.

Public servants may indeed be “working around the clock” on getting a vaccine into millions of Canadians. They may even be “ready to deploy” the vaccines when the precious vials arrive on Canadian shores.

But getting a vaccine into Canadians? Saving and extending lives here?

Well, you’re going to have to move to Britain or the United States for that, folks.

[Warren Kinsella is a former chief of staff to a federal Liberal minister of health.]

(CNN) The General Services Administration has informed President-elect Joe Biden that the Trump administration is ready to begin the formal transition process, according to a letter from Administrator Emily Murphy sent Monday afternoon and obtained by CNN.

The letter is the first step the administration has taken to acknowledge President Donald Trump’s defeat, more than two weeks after Biden was declared the winner in the election.

Murphy said she had not been pressured by the White House to delay the formal transition and did not make a decision “out of fear or favoritism.”

“Please know that I came to my decision independently, based on the law and available facts,” Murphy wrote. “I was never directly or indirectly pressured by any Executive Branch official — including those who work at the White House or GSA — with regard to the substance or timing of my decision. To be clear, I did not receive any direction to delay my determination.”

The certification of Joe Biden’s massive win is the best thing to come out of Michigan since the Iggy and the Stooges’ first album! 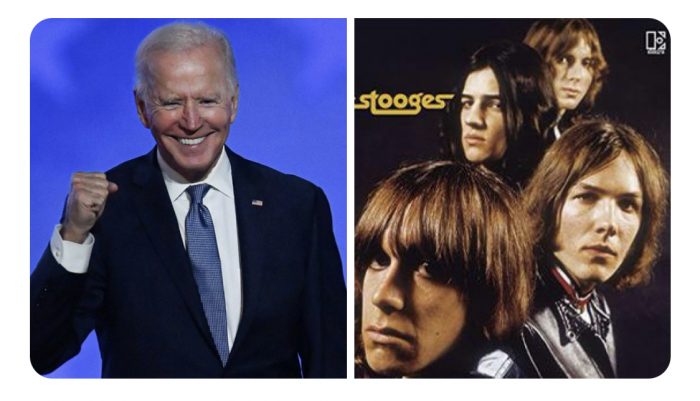 The death of our king

It was January 1967, just after New Year’s, and my Dad came home from Parkland Memorial Hospital in Dallas, where he worked as a doctor. He was preoccupied.

“There are FBI agents all over the hospital,” my father told us, a bit bewildered. “Dozens of them. None of us can get anywhere near the floor where he is. They don’t want anyone talking to him, or interacting with him.”

To us – Irish Catholic Canadians living in Dallas – Ruby’s fate was of more than passing interest. To us, Kennedy had been our hope, our liberator, our Obama before there was Obama. He was the first Irish Catholic to become President, and – from the perspective of my Irish Catholic family, then and now – he was murdered on November 22, 1963 principally because of that.

My maternal grandmother was succinct about it all, as she was about everything. “We are Irish and Catholic, and we were lower than dirt, to them,” she said. “They killed him because they couldn’t get over the fact an Irish Catholic had become president.”

“They,” of course, were the white, Protestant compact that had ruled the United States of America since its beginnings. And, if you ever doubted the extent of their power, you should have lived with our family in Dallas, Texas in the Sixties. Back then, Dallas was the epicenter of racism and injustice on the continent. It was a furnace of hate.

We didn’t have much money, because my Dad was starting out, and my Mom was at home raising my two brothers and me. We lived next door to a Mexican-American family, and their son David was one of my best friends. But David did not attend David G. Burnet Elementary School with me, where I learned (and still know) the Pledge of Allegiance. I didn’t understand why David didn’t go to the same school as me. But my parents knew.

One day, my Mom spoke to her closest Texas friend, Mrs. Stevenson, and said to her that – one day – David would be permitted to go to school with me. Mrs. Stevenson, who is one of the nicest people you could ever hope to meet, said this: “Well, on that day, I will go down to the school with my gun.” Sweet as pie. Just like that.

Dallas, Texas – where JFK was shot down in the street, like a stray dog – was like that. On the surface, it was big and friendly and warm. Underneath, the place was seething cauldron of resentments and prejudice. Guns and violence and casual expressions of bigotry were everywhere. Even as a kid, I remembered I was still a Canadian, and therefore a stranger in a strange land.

I do remember, however, our family returning to Canada. As our station wagon edged towards the border, my Dad – who was not ever given to melodrama – said he wanted to get out and kiss Canadian soil.

All of us understood, and none of us looked in the rearview mirror at the departing United States – or Dallas, where our King was murdered, on November 22, 1963.

Pardon me? No, pardon you!

Me on ⁦‪Sun Media, on the real reason Trump‬⁩ is desperate to hold onto power! ⁦‪