(And, for clarity’s sake, I wasn’t denied in the “green light” process – I simply didn’t bother. Life’s too short, etc.)

Here’s one of the things pissing me off about the eve Adams thing:

4) but eve Adams does even though there are few ppl in politics tougher than dimitri Soudas.

Adams and Eve: why everyone should be happy

It’s a happy day. If you take everyone at their word, that is. Here’s why:

From the archives: Laura and Eve (and others)

Oh, and my take on the Ottawa drama? I don’t see much downside for either Adams or Trudeau. Being an election year, weird stuff happens.

It was a little thing, apparently. A tweet, a bit of digital detritus, something that comes and goes, with little or no attention paid. Happens all the time.

What made it significant was not its casual sexism, or even that the tweet’s author (a high-profile columnist) or its target (a former deputy chief of staff to former Ontario premier Dalton McGuinty) are both female.

No, what made it most noteworthy was that, after the sexist tweet was tweeted, no one really said anything. No one really objected…

The occasion was the appearance of senior Ontario Liberal Laura Miller before a political circus masquerading as a legislative committee. As Miller testified about the decision to cancel gas plants — an issue considered moot by voters in McGuinty’s Ottawa South constituency, where they recently enthusiastically elected a former McGuinty aide to replace him in the provincial legislature — the columnist tweeted: “[Miller] looks and talks like a Valley Girl. This woman was the second most powerful person in the Premier’s office? Sad statement.”

What was “sad” was that the columnist — who I won’t name, and who (like all of us) shouldn’t be offering anyone tips about their personal appearance or diction — didn’t think the tweet was a problem.

Perhaps it was because they did not want to get on the wrong side of the arch-conservative columnist (unlikely). Perhaps they didn’t notice the tweet (unlikelier)…

Whatever the reason, one thing was axiomatic: What was noteworthy wasn’t the rank sexism. In politics, women get hit with that all the time, pretty much. What was significant, instead, is that even progressive political voices remained mostly silent.

Ontario NDP Leader Andrea Horwath gets called “a whore” by a radio commentator, and the other political panellists on the show — labour leader Buzz Hargrove and business leader Catherine Swift — say nada.
The sexism is bad enough; The indifference of people who should know better makes it measurably worse.

…There are other infamous examples. Former Liberal cabinet minister Belinda Stronach gets called, variously, a dog, a whore, a bitch and a prostitute — and her critics (all Conservative politicians) are widely condemned. John Crosbie dismisses Sheila Copps as a baby, and ends up boosting her reputation, and diminishing his own.

Too often, however, these things pass without comment. Sexism directed at female politicos receives a collective shrug. It’s almost worse than the sexist remark that preceded it.

Oh, and Laura Miller? She’s no dummy. And she deserved a lot better than she got — not just from the columnist, but from erstwhile friends, too.

Last night, my (feminist) partner and I went to see a movie.  The trailers came on, and one was for Fifty Shades of Grey, which has attracted no small amount of controversy.  When we got home, I looked up the plot on Wikipedia.  Here’s what I read:

“The tension between Ana and Christian eventually comes to a head after Ana asks Christian to punish her…Christian fulfills Ana’s request, beating her with a belt.”

That’s how the thing ends, apparently.  Sound like entertainment to you? Me neither.

Anyway, I tweeted this:

After seeing trailer, looked up the plot of this #FiftyShades book/movie. So, beating a woman with a belt is entertainment, then?

Which attracted a fair bit of agreement, but also this:

I thought that was an idiotic comment, and suggested the author do PR for Jian Ghomeshi. She responded that I was “cheap and uninformed.” That may be so, but I got curious about my correspondent. So I went looking, and here’s what I found: 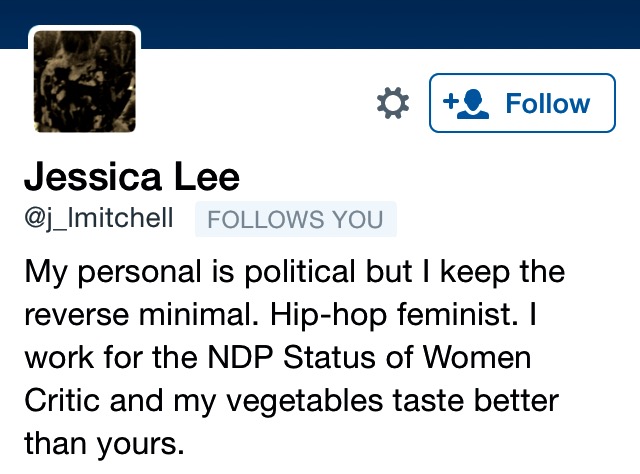 Wow. So I asked her this:


.@lmitchell So the #NDP Status of Women critic also agrees that women being beaten with a belt is entertainment? #cdnpoli — Warren Kinsella (@kinsellawarren) February 8, 2015

She didn’t respond. She did, however, delete her earlier tweets, in which she defended the beating of a woman with a belt.

When Canada Goose was sold to a U.S. Hedge fund, I stitched this over their logo in protest. Today, I display it to remember Tuff Gong on his 70th birthday. Likkle more! 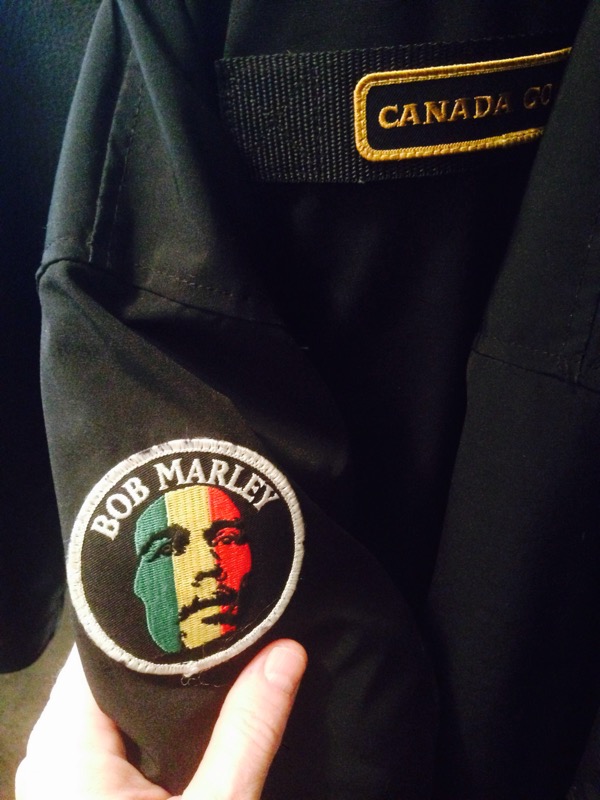 Choose your gut over your head. You can’t go wrong.

At what point, exactly, do you finally admit you were tragically, fundamentally, historically wrong?

(Reuters) – Islamic State militants are selling abducted Iraqi children at markets as sex slaves, and killing other youth, including by crucifixion or burying them alive, a United Nations watchdog said on Wednesday.

Iraqi boys aged under 18 are increasingly being used by the militant group as suicide bombers, bomb makers, informants or human shields to protect facilities against U.S.-led air strikes, the U.N. Committee on the Rights of the Child said.

“We are really deeply concerned at torture and murder of those children, especially those belonging to minorities, but not only from minorities,” committee expert Renate Winter told a news briefing. “The scope of the problem is huge.”

“Twitter is expected on Thursday to announce a new partnership with Google, clearing the way for tweets on the microblogging service to be easier to find on the world’s most popular search engine.

The deal, according to a person familiar with the matter, will give Google direct access to the hundreds of millions of tweets that flow through Twitter every day, and make it possible for tweets to more quickly appear in Google search results.”

The war roomers will be delighted that they will now be able to quickly locate stupid tweets made by their opponents, and disseminate them to grateful media organizations who cannot afford to cover campaigns like they used to.

And then the war roomers will remember that, um, their opponents will be able to do the same thing to them. 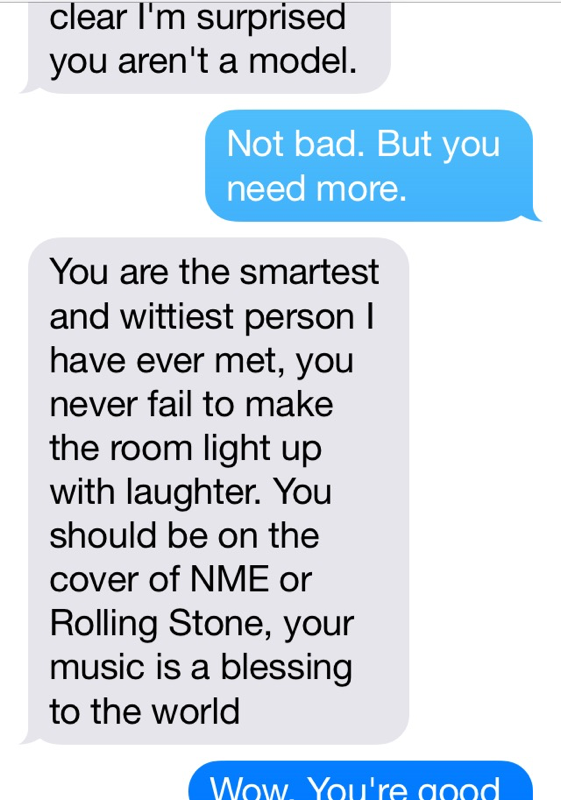 If you read any poll this year, read this one

My friends at Abacus have come up with the most fascinating survey – and the most important one – of this election year.  It will make you smile, and it will make you think.  Here it is summarized in three helpful bullets.  The link is below the graphic: 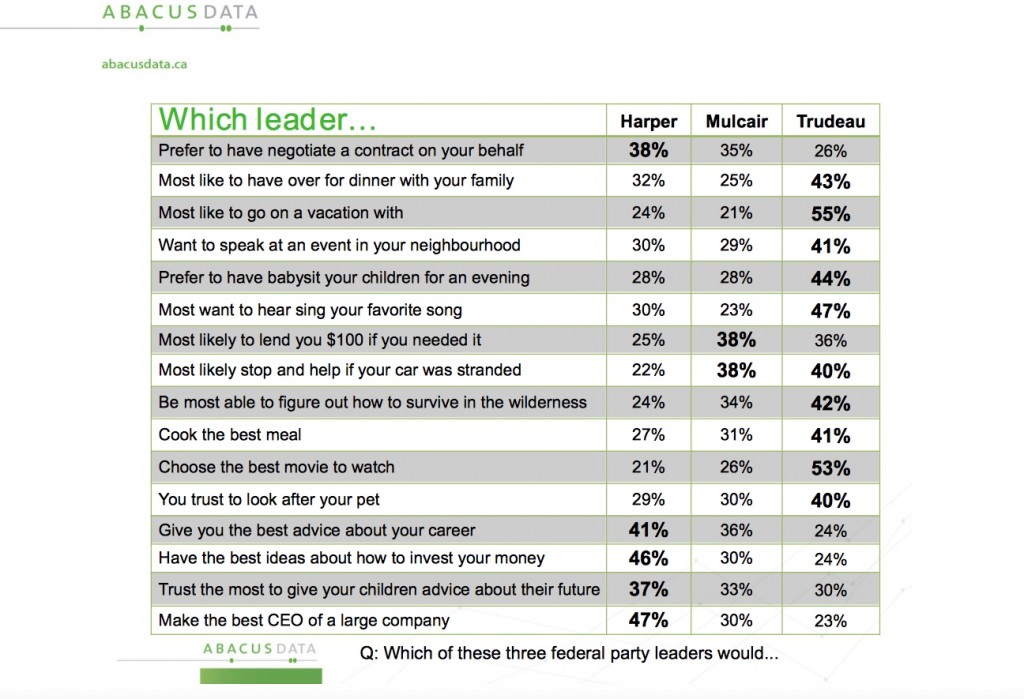