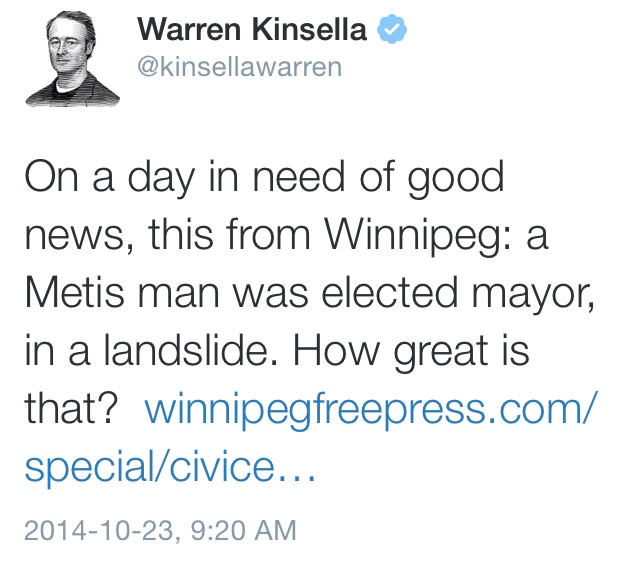 Here is an incredible video shot by Josh Wingrove of the Globe. It is looking down the Hall of Honour towards the library of Parliament. On either side of the hall are the rooms where MPs meet for caucus every Wednesday.

If you guys don’t come to our show tonight, I’ll never talk to you again

Actually, wait. If you don’t come, I will talk at you incessantly, without pause.

That will motivate you better, I suspect. 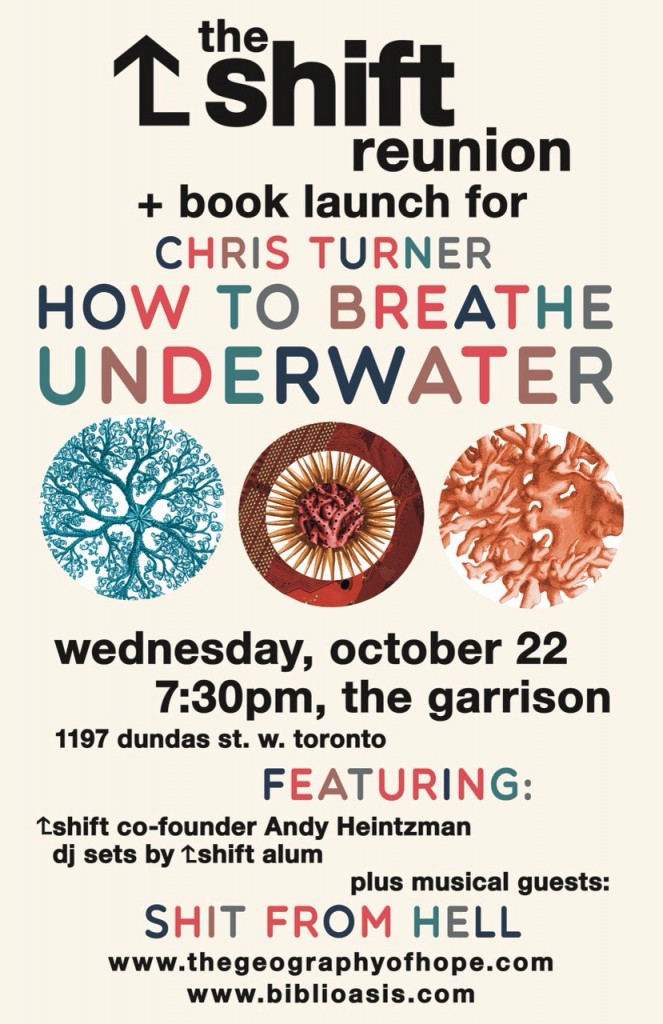 SFH at the Garrison Wednesday night!

For Shift! For Chris Turner! For Evan Solomon! For civil liberties!

Thinking about running for office. Things could get interesting.

On ISIS fight, Canadians are with Obama

So sayeth Abacus.  The polling firm didn’t ask, but I suspect that they would have found that Canadians don’t think the President is doing what he’s doing because of his ego, either. Libs, take note. 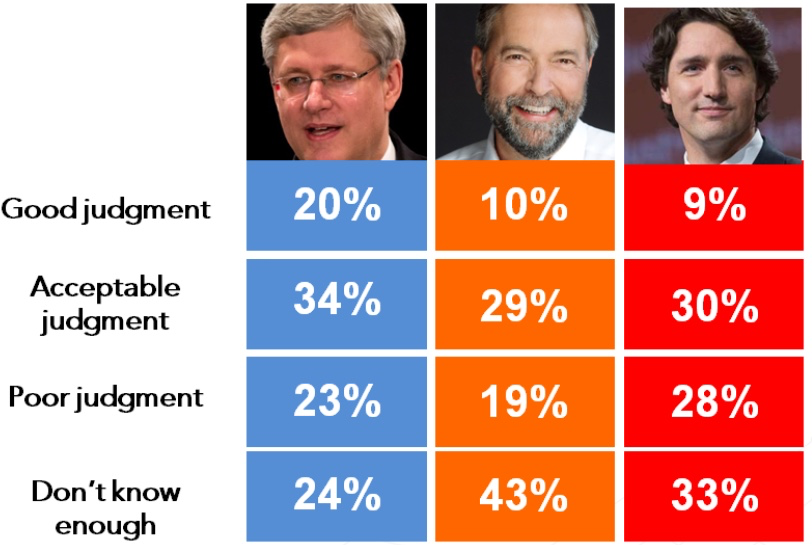 We live in dangerous times

The murder of the CAF member in Saint-Jean-sur-Richelieu by an avowed ISIS sympathizer had political implications, and within minutes.  Yesterday, the Prime Minister stood in the House of Commons to speak about the terrible event – even before the rest of us knew it had happened – and explicitly linked it to terrorism.

“The individual who struck the two CAF members (Canadian Armed Forces) with his car is known to federal authorities, including the Integrated National Security Enforcement Team,” PMO later said in a written statement issued Monday evening. “Federal authorities have confirmed that there are clear indications that the individual had become radicalized.”

All that may be true, but all of us should be profoundly uncomfortable that any politician would be speaking about this tragedy – and assigning motive – before the police.  That is not the way our system works.  And it raises the distinct possibility that Harper and his advisors are willing to reduce a soldier’s death to a talking point.

If that’s true, then we are piloting through some very dangerous waters, indeed.  In the aftermath of the (strikingly similar) May 2013 murder of British Army soldier, Fusilier Drummer Lee Rigby of the Royal Regiment of Fusiliers, British public opinion became dangerously inflamed.

English hate groups, like the English Defence League (which, by the by, is partnered with the Jewish Defence League here in Canada) used Rigby’s murder to whip up support. There were riots and violent street clashes, and dozens of arrests. Anti-Muslim sentiment exploded.

The Prime Minister and his government have a responsibility to (a) let the police do their job (b) ensure public opinion isn’t needlessly inflamed (c) resist the temptation to politicize a soldier’s death.

Will they do any of those things? Don’t hold your breath.

As someone once said, we live in dangerous times.

Evan Solomon will be there, and he may speak to you!

The book is only out officially today, so many of us haven’t had a chance to read it yet. But, hopefully, it contains more about the highly revealing exchange Trudeau recently had with sports writer Bruce Arthur. That encounter resulted in a fascinating, wonderfully-written story, and one hopes it – or something like it – makes its way into Common Ground.

In the story, Trudeau talks about his March 2012 charity boxing match against Conservative Senator Patrick Brazeau, in which Trudeau wiped the floor with the disgraced Tory. It is highly revealing.

“My dad taught me how to box as just a little kid, among other things,” Trudeau told Arthur, getting off some well-deserved jabs at Sun New Network along the way. “He was a black belt in judo and he wanted us to be adept in a wide variety of athletic pursuits.”

Trudeau recalled the insults being hurled at him ringside by the Sun people, and others. “Obviously you learn to ignore nasty negative attacks, but you also learn not to give credence to the people who think you’re wonderful because they loved your father,” says Trudeau. “People who say [I’m a silver-spoon kid] forget what kind of a man my father was, and what kind of father my father was…He was a tough man, and he was disciplined, and so filled with love for us; he knew we would have extra baggage to deal with and to carry, because of the name he was giving us, and he wanted us to have to tools to deal with it.

“So he never would have wanted us to take the easy way, or to take things lightly.”

As such, Trudeau told Arthur about the moment when he knew he was going to take Brazeau down. “I suddenly had permission. One of the things I had to learn as a kid, the eldest of three brothers, is to control yourself. To not lose your temper, to not get carried away, because I was bigger than my brothers. We were three boys close in age, and I had to learn to restrain myself a little bit.

“And in politics, as a teacher, my personality is to be nice, and it works in politics. But suddenly this was a moment where I was allowed, and fully expected, to give rein to a side of myself that I don’t normally allow out there, which was a ruthless and forceful side. It’s that moment that where push comes to shove, do you have it? And I always knew I did; I just knew I could never show that in life, and suddenly here was a moment where I could.”

And he did. And everything changed for him, after that.

Many of us don’t know if there’s more of that sort of passion in Trudeau’s new book. But one thing we do know: that passion, that ruthlessness, is already in him.

As they ready themselves to climb into the ring with Justin Trudeau, perhaps Stephen Harper and Tom Mulcair should reflect on that. 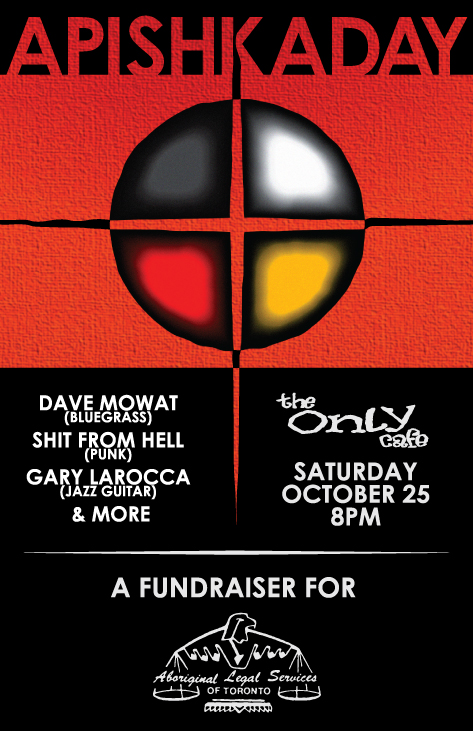