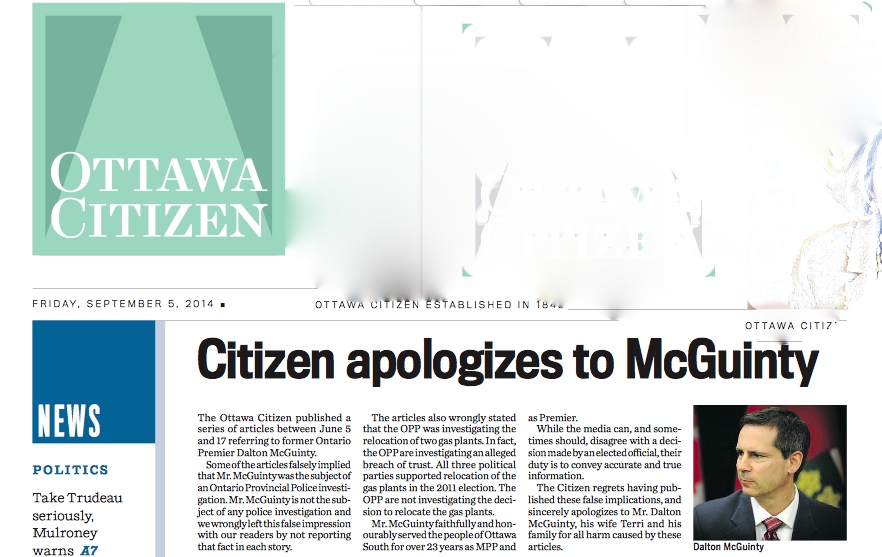 Some of us had been saying for a long time, forcefully, the Citizen (and the leakers at the OPP) had been reckless and wrong about the former Premier. Very, very happy to see this.

[I’m putting this up today, early, because I have been actually shocked by how little coverage there has been of the significance of this day. W]

September 4, 1984: thirty years ago today, I was on an Air Canada flight from Ottawa, heading home to Calgary to start law school. The pilot came on the blower.

So began the Mulroney era, and a decade in the wilderness for the Liberal Party of Canada. It was an extraordinary decade, a time of great change, and it is hard to believe it all started thirty years ago today.

Why does all this matter now, thirty long years later? Two reasons.

As in the Fall of 1984 – and as in the Spring of 2011 – you can sense another earthquake of political change is imminent. You can feel the tremors of it under your feet. And it is unlikely to end well for the Conservative Party or the New Democratic Party. Quietly, therefore, smart Tories and New Democrats are preparing for a rout.

That may be good, that may be bad. Depends on the team you belong to, I suppose.
One thing cannot be disputed, however:

SNN: the first (and probably last) thing I’ll say about what I said

We always said David Bertschi was our preferred candidate

What makes you think we didn’t prefer David?

In Tuesday’s Sun: why Kathleen Wynne should be Prime Minister

So, 1,200 of your family, friends and neighbours are murdered, or go missing. Would you be upset?

How about this: the murders and the disappearances have been going on, unchecked, since 1980. Is that upsetting?

No? Then, let’s say you go to Ottawa for help, and they shrug and refuse to do anything.

At this point in the column, you’ve likely figured out that the 1,200 missing or murdered people aren’t your family, friends and neighbours. They’re aboriginal women and girls.

Right about now, therefore, you are perhaps performing the calculus of the missing and murdered indigenous women issue, an issue that now has its own online hashtag, #MMIW. The calculus goes like this: (a) it makes me sad, but it’s been happening for a long time (b) it’s never really going to stop (c) these women have sort of made themselves victims with their “lifestyles.”

Now, we don’t even have to say, out loud, that if the 1,200 murdered or missing were, say, debutantes or Rotarians or hockey players, nobody would be looking for something else to read in today’s paper. If it had been a bunch of white girls who had been killed or disappeared, there would be no collective societal shrug taking place.

Holy God Almighty, there’d be a hue and a cry like none this nation had ever seen. You’d have mild-mannered suburbanites storming Parliament Hill with pitchforks and torches, if we were talking about twenty Midget “A” teams, or the entire population of Tilt Cove, Newf. or Greenwood, B.C.

But it’s aboriginal women. And so, nobody’s enraged, and nobody’s storming Parliament Hill.

Actually, wait. Kathleen Wynne is. And the provincial Premiers – of all partisan stripes – are right behind her.

Wynne, to her great credit, has been raising MMIW, an issue in which there is no political upside, and in which there are even fewer votes. She has been relentless on the issue, demanding an inquiry into what happened to these women, and why, and how we can stop it.

Stephen Harper, hearing her, has shrugged. No judicial inquiry, he said, and some columnists and editorial boards – Andrew Coyne, Tom Walkom, Jeff Simpson the National Post – dutifully lined up behind him. Simpson called it all “posturing.” Walkom said: “don’t need it.” From the Post, the same: “we don’t need a national inquiry.”

It’s true that inquiries sometimes do little, or they do more harm. After Gomery, Somalia and the like, Canadians are weary of self-mandating, self-financing judicial circuses, merrily stomping all over peoples’ constitutional rights. That part is true.

And it may also be true, as Harper says, that hundreds of missing and murdered indigenous women isn’t just a sociological problem – it’s a criminal one.

But if Harper is right, then, why not treat MMIW as a criminal matter – that is, the biggest mass-murder and mass-abduction case in Canada’s history? If it’s a crime – and it is – then why not create a special team of RCMP and federal prosecutors to start bringing indictments? They all work for Harper, after all.

So where do you stand, assuming you’ve made it this far? With Harper or Wynne?

Personally, I’m a proud Dad to a young aboriginal woman, and I can state – without getting into all the details – that the Prime Minister knows of her. I can also state that, on aboriginal issues generally, Stephen Harper – remember his residential schools apology, here – is not nearly as retrograde as some suggest.

And, until he does, “Prime Minister Kathleen Wynne” is sounding better and better to not a few of us.

She won six medals at the event, two as part of relay teams, and four individual races, including silver in the 200m individual medley and 50m backstroke, and bronze in 100m backstroke and 100m butterfly. Her races were in the U19 division.

It’s Forum, so everybody needs to take a frigging Valium. On the other hand, however, this: 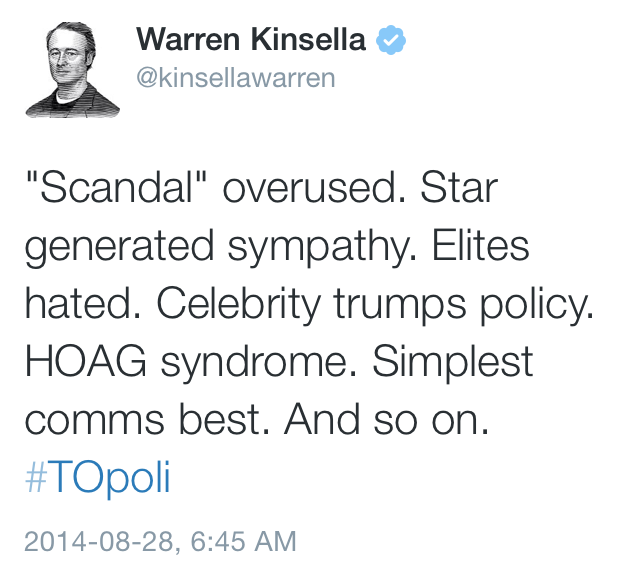 Clowns at Midnight, on the Devil

The view from here

Doing edits on the new book, 30,000 words in. Dunno if it’ll sell two copies, but it may surprise a few folks.

Heading home in two days. Other surprises await there, too. 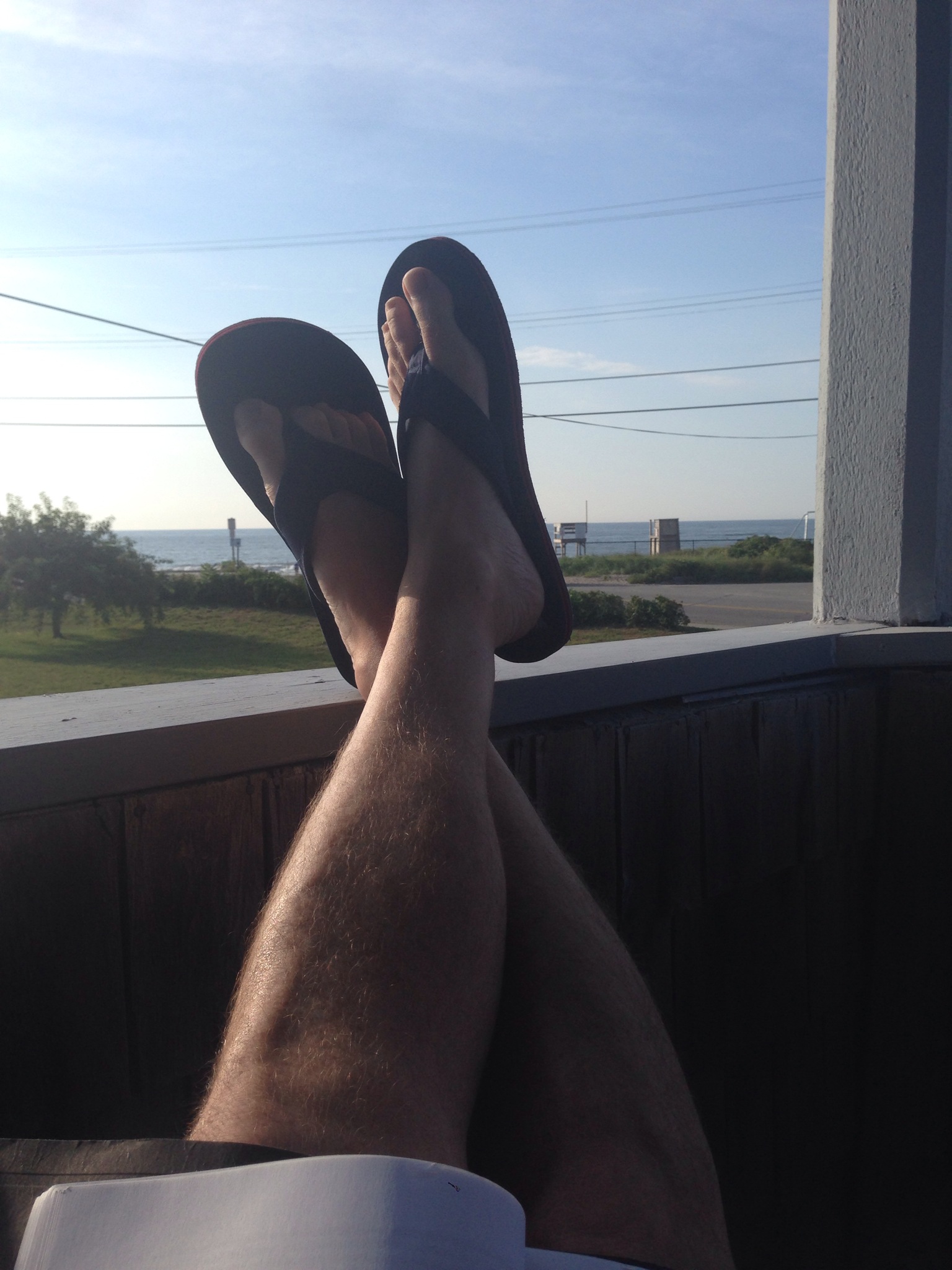