I think I was destined grow old in the company of dogs. Anyway, carry on.

In Tuesday’s Sun: four reasons why the Parti Quebecois lost their majority

When the Quebec election campaign started, almost one month ago, the governing Parti Quebecois were in the lead, and everyone assumed they were heading towards a majority in the National Assembly.

Well, almost everyone. A certain former Liberal Prime Minister told this writer that there would be no separatist majority after voting day, April 7.  “They’re going to lose ground,” said he.  “Just watch.”

And so they did. In the month that followed, the PQ made four critical errors.  The result has been dramatic: now it is Liberal leader Phillippe Couillard who is in the lead, and Premier Pauline Marois who is in second place.

Mistake One: they alienated their own base.  The PQ are a social democratic party.  They are closer to trade unions than the Liberals are, and they are effectively seen as the equivalent of the New Democrats in the province (which is why Thomas Mulcair has always been unwilling to say much that is critical of the separatists).

But by trumpeting the recruitment of Pierre Karl Peladeau, the big-business billionaire who had humiliated the PQ’s allies in the CSN (Confédération des syndicats nationaux), Marois left long-time party members angry and confused.  As one of the men who ultimately owns the pro-Canadian, arch-conservative Sun News – and, full disclosure, the avowedly pro-Conservative newspaper you now grasp in your hands – Peladeau’s ideology isn’t the Parti Quebecois’ ideology.  Party members noticed.  The media, too.

Mistake Two: the PQ campaign was all tactics, no strategy.  When their lead in the polls started to slip away, Marois panicked, swinging at everything and anything.  At one point, she suggested – out loud, with a straight face – that democracy in Quebec was in peril because of English-speaking students in Montreal might vote.

When Quebeckers stopped laughing at that one, Marois smeared former Premier Jean Charest and his successor Couillard with innuendo about corruption.  The Liberal leader responded with disclosure of his personal finances – leaving a flustered Marois, married to a businessman whose name has been heard on wiretaps at an anti-corruption inquiry, refusing to do likewise.

Mistake Three: the Parti Quebecois became the party of hate.  Before the campaign got underway, one candidate posted “F**K ISLAM” on Facebook, and Marois didn’t object.  Another PQ candidate promoted the old anti-Semitic canard about a kosher tax, and called Jewish circumcision “rape.”  She apologized, but remained a candidate.

And, of course, there was the PQ’s so-called “values” Charter, which makes the wearing of religious symbols illegal.  To many, the Charter recalls the policies of the neo-Nazi National Front.  But Marois is undeterred.

When Peladeau declared that he wanted a separate country for his children, the first person to clap – onstage, in front of the cameras – was Pauline Marois.  When the PQ campaign immediately commenced tanking as a result, Marois commenced furiously backpedalling.  Too late: the hapless PQ leader had given Couillard the issue he needed.  Quebec voters may have been in the mood for a PQ majority – but they weren’t in the mood for a separate Quebec nation.

Can Marois claw her way back in the remaining days? Possibly.  In order to win big, Couillard needs to have a much bigger lead among French-speaking voters.  Meanwhile, Marois has been performing better in debate, and on the hustings.

But her majority seems to have slipped away – and, here at Sun News, we are genuinely looking forward to the return of Pierre Karl Peladeau.

Well, yes, in fact, it does.  And someone has noticed.  The results: funny.

(Another reason I love this campaign: it’s prepared to laugh at itself.)

Do you wonder why I think the so-called deleted email scandal is a load of bullshit?

Wonder no more. And THINK about it. 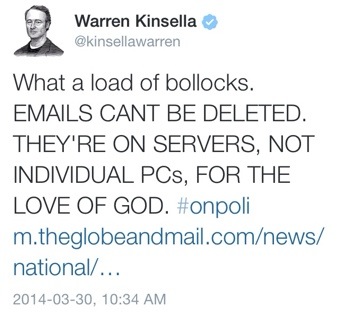 In Sunday’s Sun: he taunts us

He haunts us still.

Whether you loved him or you hated him – and there were plenty of Canadians on either side of the divide – on one thing we all could agree: Pierre Trudeau looms like a giant, still, above the Canadian political landscape. Nobody is neutral on the subject of the former Liberal prime minister. Everyone has a view.

So, too, is the case with his eldest son, who is now a Liberal Party leader like his dad. And, if the polls mean anything anymore – a big if – the man most likely to be our next prime minister.

That famous line about “haunting us” doesn’t quite apply to the son, however. He doesn’t haunt us, not yet. Instead, Justin Trudeau mainly taunts us.

Trudeau Junior defies the consensus of the pundits and the politicos. He does the unexpected. He remains more popular, durably popular, than any politician in recent memory.
I’m a Liberal type, and a student of politics, but the more I see of Justin Trudeau, the less I think I know. He is even less conventional than his unconventional father.

In the year since he became Liberal leader at a lackluster, poorly attended affair in an Ottawa convention hall, Trudeau has made enough mistakes to kill off any other politician’s career.

Along with the mistakes, there have been plenty of contradictions, too.
He has embraced pipelines and pot, almost simultaneously. He has promised open nominations, and then giddily manipulated them.

Justin Trudeau – for all his faults, for all his inexperience and his youthfulness – is overwhelmingly the guy Canadians want as prime minister. Still.

They know he isn’t perfect. They know he probably makes far more rookie mistakes than his opponents. But they don’t care. Voters want Justin. Not Stephen, and not Tom.

He’s arrogant, sure, but all the great leaders usually are. He’s cocky, certainly, but that didn’t hurt him when he faced off in a boxing ring with a Conservative senator with a black belt, did it? He’s a bit too melodramatic – but having a flair for the dramatic never hurt anyone’s political career (just ask Ronald Reagan, the actor).

Personally, I can say that Justin Trudeau occasionally ticks me off. He takes unnecessary risks. He doesn’t listen to advice too often. He frequently seems more arrogant than any previous Liberal leader, and that’s no easy thing to do.

But the fact remains Justin Trudeau is the most popular leader Canada has seen in a long, long time. And, barring a disaster between now and 2015, the experts say he is going to be our next prime minister. 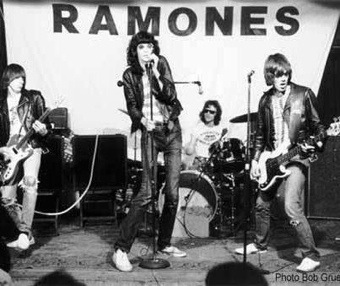 “…Their SOUND was forever first and one-two-three-foremost within their arsenal, but the band’s look posture, taste, aroma, and very thorn-in-the-craw omnipresence offered vital inspiration, and delivered desperately needed hope by the dumpster-load, to all of us who just refused to take Frampton Comes Alive or even Rumours lying down.” – Gary Pig Gold, fufkin.com, July 2002

My second failed attempt at hosting Sun News Network’s Byline, below.  Comments are welcome, but anyone who takes a cheap shot about hairlines is banned for life.

“That act is not a criminal statute and carries no penalties.”

That’s a tiny quote from one of the early stories about the gas plant/email “scandal.” In the avalanche of hysterical, over-the-top coverage that has happened since, it would be easy to miss or forget that little bit of information, wouldn’t it?

I went to law school; I love the law. When you go to law school, you are taught to (a) look at a bunch of facts, and then (b) apply the accepted rules – case law, statute law – to those facts to (c) determine and/or analyze what kind of problem you’ve got, and what you should do about it.

The facts are these: political staff deleted some emails and stuff on their computers. They sought outside help in doing that. Happens  all the time – even, I can assure you, in the offices of the OPP and the Opposition.

The law is this: nada. As per the headline to this post, there is no law, and nothing that carries any penalties.  Nothing.

The analysis is this: lacking an actual law, the OPP – which has been giddily leaking to the Ottawa Citizen, Gomery-like, about their “investigation” for weeks – has decided there was a “breach of trust” here.  Can’t find a law to charge someone with? Then say there’s been a “breach of trust.” It’s an all-purpose, catch-all.  But no less than the Supremes have said that, to make it stick, there has to have been “corruption, partiality (or) oppression.” I don’t see that here. Not even close.

This  affair is a load of bollocks.  “That act is not a criminal statute and carries no penalties.” That’s what you need to know about this “scandal” – namely, there isn’t one.

Oh, and the geniuses who sent out the Premier of Ontario no less than three times, yesterday, to deny any and all knowledge of this gas plant/email stuff?

They’re the Paul Martin crew (one presently a Newstalk 1010 host), who piloted the Liberal Party of Canada into the ditch in 2004-2005.  They sent Martin out multiple times to deny any and all knowledge of the sponsorship stuff, too. Remember that?

Didn’t work, as I recall.

John Ford: The new mayoral candidate. from McGillicutty on Vimeo.

An open letter to Toronto media

None of the candidates mentioned the word “crack” because I suspect the research shows, consistently, voters don’t want candidates talking about crack instead of the many other issues.

In addition, I also suspect the research shows that the media’s ongoing preoccupation with crack, to the exclusion of any other issue, is one of the reasons why voters still cast a sympathy vote for Rob Ford.