Looking for a Toronto-area accountant who can do occasional accountancy stuff for smallish consultancy-type firms. Anyone know anyone? God bless.

Things you can’t do when you’re not a toddler

Okay, this made me laugh. Yes, I’m strange.

In Tuesday’s Sun: A column in which I again stand with Israel. Hate mail landing in 5…4…3…

For political parties, winning elections is – naturally – the big prize. Almost as good: stealing away an entire demographic group from an opponent.

It is an extraordinary achievement. But when you consider how dissimilar Canadian Jewish voters are to their equivalents south of the border, maybe not.

In the U.S., about three out of four Jews have traditionally voted Democrat. An overwhelming majority of American Jews – 73% – have described themselves as moderate or liberal. Only 19% of American Jews voted for the guy who claimed to lead the war on terror, George W. Bush.

That’s less than half what Ronald Reagan got in 1980, the high-water mark for GOP share of the Jewish vote. The Jewish vote trend line, among all but Orthodox Jews, is down for conservatives in the U.S.

In Canada, it’s the reverse. From almost the moment he assumed control of the united Reform and Progressive Conservative parties, Harper has devoted himself to moving every Jewish voter from the red column to the blue column. A decade later, there can be no argument that he has succeeded.

The Ipsos polling firm has estimated that, in the 2011 federal election, as many as 52% of eligible Canadian Jews voted for Harper. The vast majority of them used to be hardcore Grits. They love Harper, it seems, and they love his unabashed love for Israel.

Canadian Jews are different than American Jews in critical ways. Many more Canadian Jews consider themselves to be Zionists, and many more have visited Israel than their American counterparts.

Whatever the reason, one thing cannot be disputed: Stephen Harper owns the Canadian Jewish vote.

All of this has been very frustrating for Canadian Liberals, and particularly Canadian Liberals who are also Zionists (like me, for instance). I recall attending one Jewish community dinner with Herb Gray, the first Jewish federal cabinet minister. Stephen Harper was speaking, and when he finished, the hundreds in attendance rose en masse and started chanting Harper’s name.

“This is like a Conservative Party rally,” Gray said of the supposedly non-partisan event. “No kidding,” I said. Gray and I felt lonely, to say the least.

As of last week, all of that may be changing – perhaps, maybe. Last week, Liberal Leader Justin Trudeau issued a little-noticed statement that – perhaps, maybe – marks a significant change in the Liberal Party’s decade-long breakup with Jewish voters.

“Israel has the right to defend itself and its people,” the Liberal Party website declared. “Hamas is a terrorist organization and must cease its rocket attacks immediately.”

Liberal MP Marc Garneau went even further, with the support and encouragement of his leader. “Israel has no choice but to defend itself,” he said in an interview. “We would do the same thing here in our country.”

For Trudeau, this is as good as it gets.

When you’re a Liberal, and both the hard right and hard left are attacking you, you’re happy. And (for those of us who are Liberal and liberal Zionists), it is a long overdue development.

There are no votes, really, in foreign affairs. The Jewish vote is centred in only a few ridings in Toronto and Montreal. The reason for supporting Israel is only this: principle. 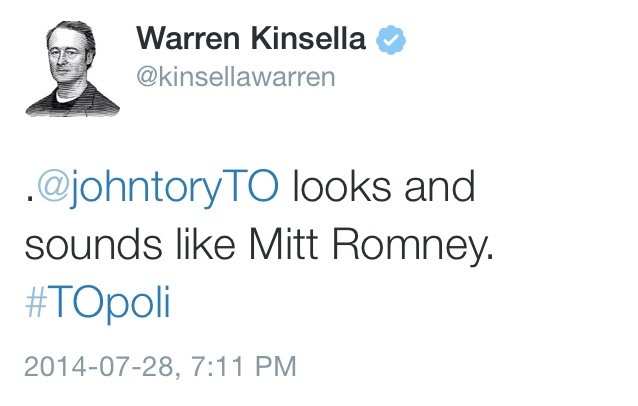 When your chosen profession has no soul, you tend to acquire a hobby 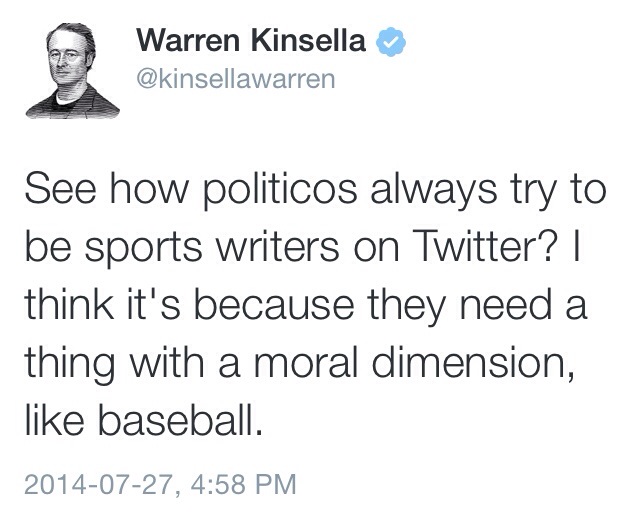 Dear John: back in TO

Daughter is back, too, with three bronze medals, two silver and one gold from NAIG; Son Two is back for lacrosse camp, and his voice is changing; and the book is going to hit about 20,000 words before July is out, looks like. And I’ve talked Lala into seeing the new Scarlett Johansson movie tonight, which apparently you need only ten per cent of your brain to follow. So I’ll fit right in.

I swear to God, Saskatchewan is so beautiful

If I lived here, I’d lie in a park and stare at the sky all the time.

Taken by Lala on the way back to Moose Jaw, from Regina. 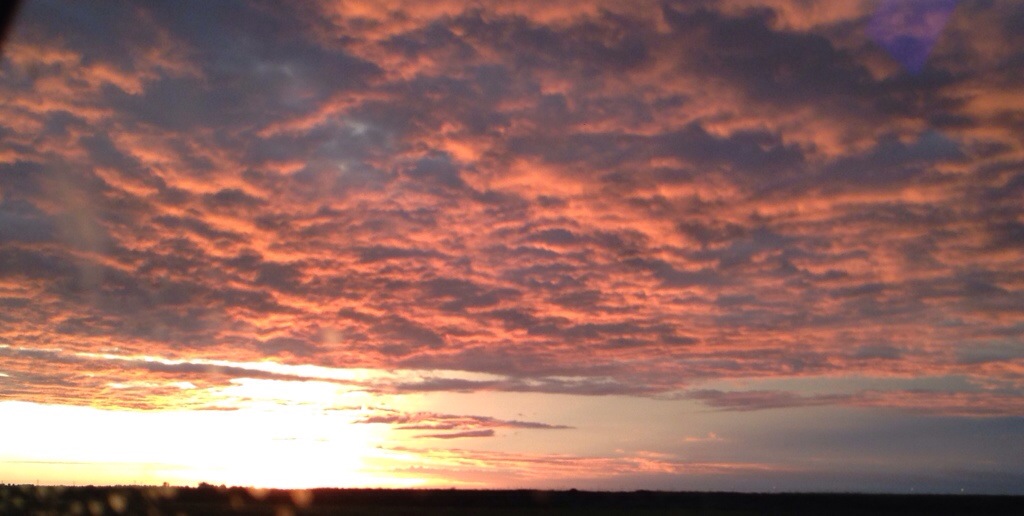 In Friday’s Sun: spare a thought for Moose Jaw

MOOSE JAW, SASK. – As you head into town here, there’s bright yellow canola sprouting on one side of the highway, and bluish flax to be seen on the other side. There’s winter wheat, too, but it’s a bit harder to spot at this time of year.

The Saskatchewan sky goes on forever and ever, and it’s frankly more simply beautiful than anything you’ll see almost anywhere else. Our pilot, Dane, takes a hand off the wheel and waves in the direction of the canola and the flax and the wheat.

“Five bucks a bushel,” says Dane Friese, who pronounces his first name as Dean. Dane has lived in Vancouver, Calgary, Edmonton and a few other places besides, and finally came home to Moose Jaw, flat broke, a few years ago. He now ferries folks between Regina’s airport and Moose Jaw. He points again at the crop.

“Saskatchewan is an agricultural province,” he says, while acknowledging the significance of potash. “And the farmers can’t even get their crop to market.”

The reason why is surprising – or, at least it was to his eastern visitors. All of the trains are ferrying oil to refineries, he says. Hardly anything else. So the crops stay warehoused in Saskatchewan grain elevators, and farmers can’t find an economical way to get it out.

Welcome to the Keystone XL/Northern Gateway paradox: in their (efficient and effective) campaign to demonize pipelines for Alberta oil, some environmentalists – aided and abetted by a lazy U.S. Congress, and the glamour of Hollywood stars – are hurting the environment-loving people who are closest to the land. Here, Saskatchewan farm families.

If the oil patch can’t ship their product via a pipeline, they find other ways. Oil’s like water; it always finds a way out.

So they send it east and west via rail. And, accordingly, there are no rail cars to carry Saskatchewan canola, wheat or flax to market.

Around here, all of this has resulted in a massive backlog of undelivered grain. The situation has grown so grave, Premier Brad Wall has demanded the federal government intervene. Saskatchewan farmers, he simply says, “would like to get paid for their hard work.”

Outside the Prairies, many Canadians and Americans are candid about all of this: they simply don’t care. They object to the existence of the tar sands, and wish to stop a pipeline at all costs. In Maine, just this week, city councillors in South Portland took steps to stop Alberta oil from being shipped through the state’s largest port.

They may not care about the implications for the families who live in or around Moose Jaw. But they should care, perhaps, about the possible consequences of oil being shipped by rail through the neighbourhoods where they live, and work, and raise their children.

The catastrophe that befell faraway Lac-Megantic provides the most powerful cautionary tale about allowing millions of barrels of oil to be shipped via rail car. People should know, by now, the dangers that are associated with the status quo.

A pipeline like Keystone would move enough oil, in a single day, to avoid having to make use of 4,200 railway cars to move the same amount. Lac-Megantic provides a compelling argument for finally doing so.

If that is not enough, those railway cars could also be to finally transport landlocked Saskatchewan grain to market, too.

That may not be as powerful a reason as Lac-Megantic. But the folks around here, like Dane, would appreciate it if you gave it some thought. 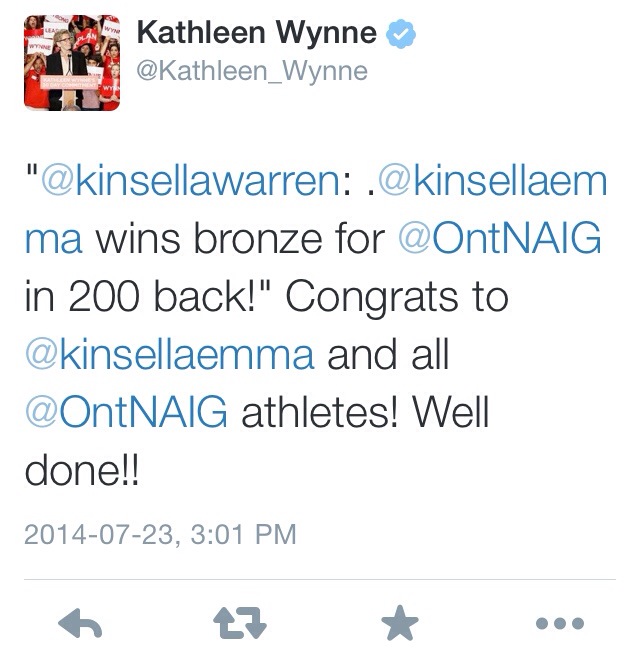 Saskatchewan: not too hilly, from this vantage point 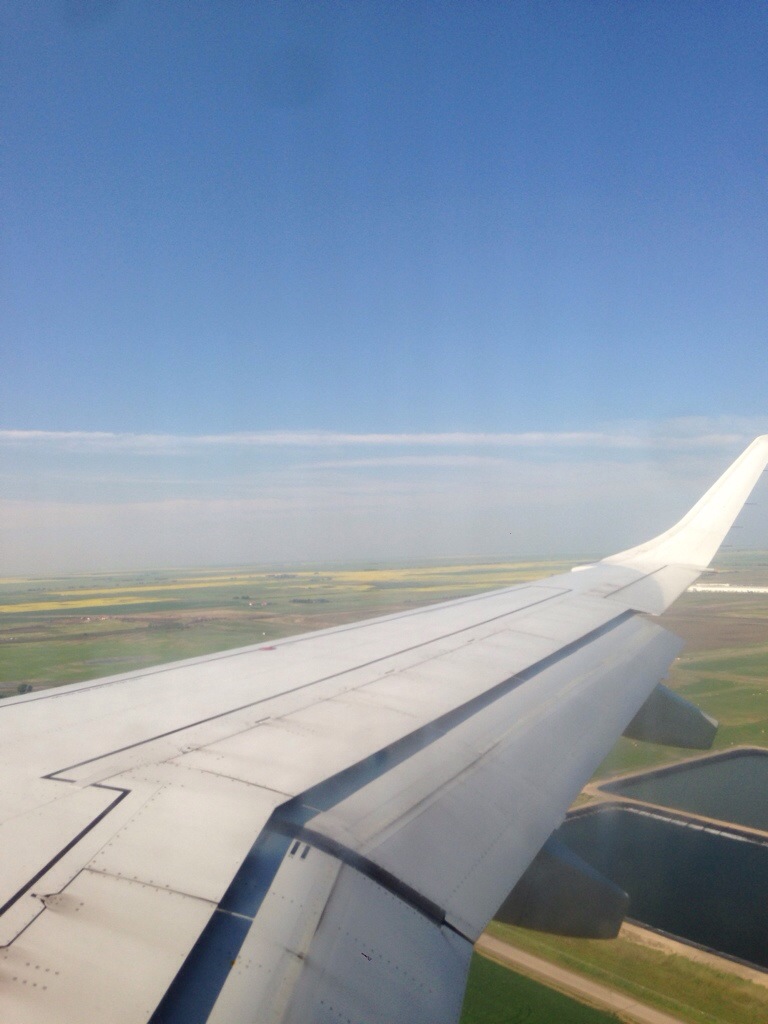