I am a dog person

The expression on his little furry face! What genius.

In a tight election race, like this one, you have to pay attention to the little things. It’s the little things that will kill you. Case in point: the Liberal government’s headlong rush to cram casino operations in every single corner of the province.

I’m amazed the Liberals have let this issue fester; I’m surprised, too, that the PCs and New Democrats haven’t been all over it. Out in the hinterland, folks are unhappy.

I’m not sure why I titled this post in that way.  I like rhymes and alliterations, as you know.

Anyway.  Yesterday’s post on GOTV caught the retweeting attention of no less than Keith Levene, formerly of the Clash and Public Image Ltd.  Here is the proof: 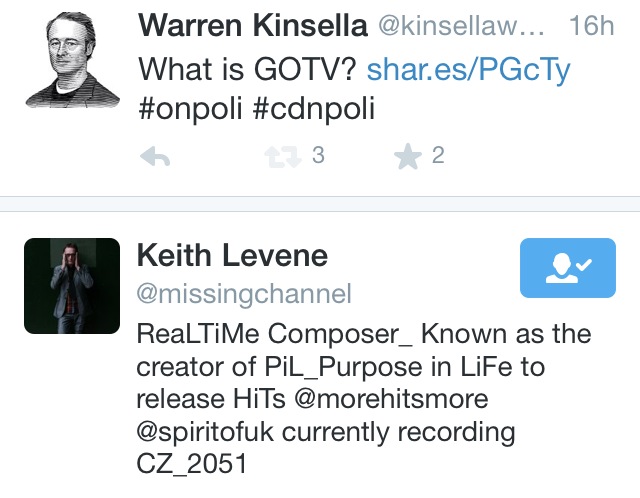 Which gives me a shameless excuse to post this.  (Interesting fact: the guy on the drums, Jim Walker, supplied beats at a single get-together of my first punk outfit, the Social Blemishes, before he hooked up with Johnny Rotten in the U.K. in 1978.)

Three things Ontario’s main political parties didn’t have, and the effect of same

1. Ontario New Democrats: Money. Effect: They disappeared in Week One, and only reappeared at the debate, at which point it was too late.

2. Ontario Liberals: A coherent message. Effect: Nobody knows what they stand for, apart from being against the other parties (unless someone wants to have a coalition with them, that is).

3. Ontario Progressive Conservatives: A calculator. Effect: Their ‘Million Jobs Plan’ didn’t add up, and their pledge to create jobs while simultaneously killing jobs made no sense, either.

Net effect of all of the above: Turnout in the advance polls is down dramatically – nearly 40,000 less than 2011 – and it’ll be even worse on Thursday.  I still think that works to Hudak’s advantage – conservative partisans number less, but can always be counted upon to get out and vote (viz., Harper 2006, 2008, 2011) – but we shall see.

In the main, it has been the most soul-destroying campaign I’ve seen in a long time, and that’s saying something.  It’s been awful.

And what’s worse is this: we’ll back at it before you know it.  Nobody is going to win a majority. The downward spiral will continue.

In Tuesday’s Sun: disband the OPP

Disgusting, dispiriting, deflating: Ontario’s 2014 election campaign has been all of those things, and more.

It is coming to a blessed end in two days’ time. But this grinding, joyless farce has given voters no shortage of reasons to refuse to participate. A sampling:

· Liberal leader Kathleen Wynne said on the weekend that Ontario’s NDP – with whom she has happily partnered for more than a year – were “Rob Ford-like.” That’s a quote.

· New Democrat leader Andrea Horwath – who has been the Liberals’ willing supplicant for more than a year – now calls Wynne and the Grits “corrupt” every chance she gets.

· Progressive Conservative leader Tim Hudak, in his centerpiece economic “Million Jobs Plan,” says that “person years of employment” is the same thing as “jobs.” This means that he has over-estimated the number of jobs in his plan by a factor of eight. His plan should be called the “125,000 Jobs Plan.”

And so on, and so on. It has been, as noted, dispiriting. The party leaders have revealed nothing to inspire us. Turnout will be historically low, and they will have no one but themselves to blame.

There is more than enough blame to go around, however. The Ontario Provincial Police (OPP) deserve plenty for subverting democracy, too.

For those who fortuitously do not live here, the OPP are (as the name implies) our provincial police force. They are Ontario’s largest, numbering in the thousands. They carry guns and – lately – they have involved themselves in politics. A lot.

In the case of the aforementioned Rob Ford, the OPP went to great lengths to discredit the years-long effort of the Toronto Police Force to investigate Ford’s penchant for associating with drug-dealers. Videotapes notwithstanding, the OPP declared there was “no new evidence” that could be used in a prosecution of Ford, and thereby let Mayor Crackhead off the hook.

Then, there was the case of deleted emails at Queen’s Park, which weren’t actually deleted – they all still exist, in Ontario government servers out in Guelph. The OPP was undeterred: one of their officers appeared before a provincial legislative committee, and falsely stated that the supposed deleter of the emails wouldn’t speak to them (he would), and that the emails were gone (they weren’t). He did this under oath.

Then, mid-campaign, the OPP’s union started running attack ads against Hudak’s PCs. The ads said that Hudak would cause “labour strife” and urged voters to vote for anybody but him.

The OPP officers were constitutionally entitled to broadcast the ads. But in a democracy, the people we give guns and great power – the police, the military – shouldn’t ever be seen during election campaigns, much less heard from.

The OPP’s management, observing the backlash against their union’s Third World-style boot-stomping of democracy, decided to compensate. It leaked details of the Queen’s Park emails investigation – a criminal investigation – to the media. They, like their union, had decided to try and affect the outcome of the election by subverting the Liberals.

Nobody knows who will be Ontario’s next Premier. But if it’s either Hudak or Wynne, nobody would blame either leader for disbanding the despicable OPP, which is officially of control and, inarguably, completely lawless.

You hear weirdos like me talking about it a lot.  And, in super-tight elections like Ontario 2014, Get Out The Vote isn’t just something – it’s everything. Whoever has the best GOTV on Thursday wins: it’s as simple as that.

Here’s a great Obama 2012 vid about what it is, and how they did it, in simple terms.  Below that, an American conservative outfit’s not-bad nuts-and-bolts vid on the last 72 hours, which is what we’re now in.

Might be more to come. But the above folks are all good eggs. Wish Nancy and Jamie weren’t in the same riding, though.

Gods of the Hammer 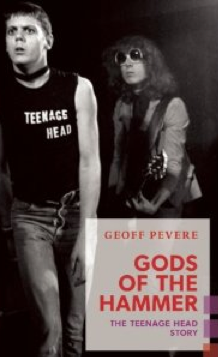 Just got Geoff Pevere’s book, and can’t wait to read it. Bonus: SFH – the band who played with Frankie Venom at his very last performance – is mentioned at the end, and Frankie’s prophetic words to us. Below, us backing Frankie on ‘Blitzkreig Bop.’

There are lots of reasons, but the four found in the highly-scientific poll below are the main ones.  Can you guess which one is the big one? I have several bets riding on this puppy, so choose carefully. This Highly-Scientific Poll has a margin of error of one kabillion percent, 21 times out of 20.

And, yes, I’ve been wrong about these provincial things before, when everyone else was, too (cf. B.C.) but I’ve also been right, when no one else was (cf. Alberta).  One thing’s for sure: in an election like this one, where voters aren’t paying any attention whatsoever, and where Ms. Nun Oftheabove is the favourite party leader, turnout is going to be really, really bad.

UPDATE: We have a new reason! The Ontario Liberal Party, which has gone Full Juggernaut, just sent around an email seeking donations from the Rt. Hon. Paul Himself! Wow, that’ll get all of us to vote OLP and donate, now!

Just wait. Within the next three  days, he and his paper will have some stirring editorial about our collective obligation to vote, and have our voices heard.