Against Me! Black Me Out

One of the best songs on the new record.  Saw her and the band do it at World Pride, and it lifted me up.

In Tuesday’s Sun: Mike Duffy isn’t the only one who should be charged

It’s a little like being charged with speeding when you’re not in a car.

Or, it’s like robbing a bank when, you know, there’s no bank. Or, say, being busted for breaking and entering, when nothing was broken into and entered.

A first-year law student understands it, and I’m certain you do, too: in order for criminal offences to be successfully prosecuted – and, presumably, the RCMP and the Crown want their high-profile prosecution of erstwhile Senator Mike Duffy for bribery to be successful – there has to be ALL of the criminal act he’s been charged with.

To wit, allegedly taking a bribe.

Now, we lawyers love Latin. We accordingly call this “act” part of a criminal offence the “actus reus.” It’s the action or the conduct part of a crime. In a bribery charge, it’s “accepts, obtains, agrees to accept or attempts to obtain, for themselves…money.”

In Latin, the mental element is called “mens rea.” It’s the requirement of having a “guilty mind.” In a bribery charge, it’s committing the act above in a “corrupt” way.

To successfully prosecute someone with a bribery charge, you need the act part, and you need the mental element part.

Now, the onetime Conservative Senator from PEI has been charged with plenty of other things, too, but it’s the bribery charge that has generated the most controversy. Here’s why: how can Mike Duffy be charged with accepting a bribe when, um, the cops aren’t also charging the person(s) who allegedly offered it?

But that’s what the Mounties and the Crown have done, here, and they look idiotic as a result. They look like they are trying to protect Prime Minister Stephen Harper, instead of enforcing the law.

It was Harper’s former Chief of Staff who, bona fide, entered into discussions with Duffy about repaying $90,000 in improper expense claims. The Chief of Staff hasn’t been charged with anything, and nor has his boss.

Why not? The “act” of bribery requires two parties. I mean, you can’t really bribe yourself, can you? It takes two to tango, bribery-style.

But here, only one party – Duffy – has been charged. Make any sense to you? Me neither.

There has been some speculation that the Prime Minister and his ex-Chief of Staff were not charged because the RCMP, in their wisdom, determined that neither man acted “corruptly.” That is, the mental element was not present.

If that’s so, can’t Duffy’s lawyer – and he’s got an Ottawa criminal defence lawyer who is legendary, believe me – argue the same thing? “Your Honour, Senator Duffy wasn’t acting corruptly! He simply was seeking help to repay the treasury. That’s not corruption, Your Honour – it’s a public service!”

Whenever police forces play politics, it ends badly – mainly for them. They stink at it. They tried to smear the Ontario Liberals mid-election campaign, and arguably helped win the Grits a majority. They blew up the Toronto Police Service’s criminal investigation of the city’s mayor, giving Rob Ford the best news he’s had in months. And so on.

In the Mike Duffy case, the RCMP and the Crown seem to have gotten together, and actually conspired to protect the Prime Minister and his staff.

They can call that whatever they want. I say it meets the “actus reus” and “mens rea” test for something else.

Sure, you lost the Ontario election, and the Trinity-Spadina by-election. Sure.

• Suck it up. Your brand still has value. That’s why federal and provincial Grits needed to kick the crap out of you – your brand had value.
• It wasn’t easy for them. They had to devote a lot of resources to doing that – because, again, you guys represent a real and manifest threat to Liberals in urban Ontario.
• You’re down this Summer, sure, and you’re licking your wounds. But you’ll be back – if you have discipline and conviction.

Take it from this Chretien and McGuinty Liberal: people will write your obituary a million times. Your job is to wipe your feet with the obituaries, and find your passion again.

Both those guys, who I was privileged to work for from 1993 to 2013, were written off many, many times. They came back.

You can, too, Dippers. Now quit your moping.

Nearly 13,000 words in less than a month, Daughter was in opening ceremonies at North American Indigenous Games, sons again tore up the links in a golf tournament – and heading to Sask with Lala early Wednesday. It rained, but whatever.

I asked Daughter to send me a selfie of her and some of the Team Ontario athletes around her.  This is what she sent instead.

NAIG: that’s my daughter somewhere down there

She’s there – along with 500 other red-jacketed Team Ontario athletes – in Regina for the North American Indigenous Games.  Couldn’t spot her, but I am so proud she is there.  You can watch the games here. 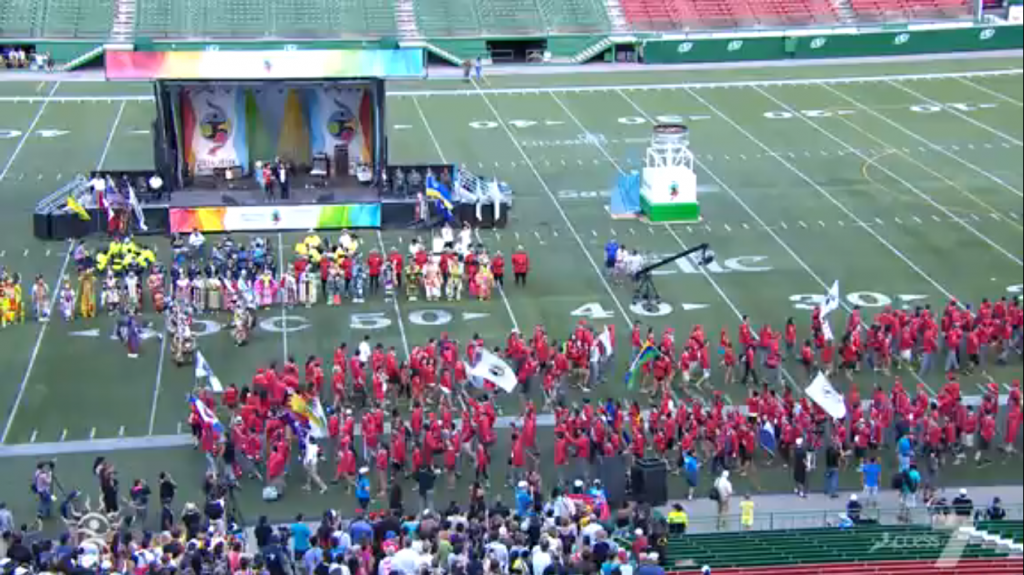 Dear John: This is the new age

Miles from any road, far from any other person, are me and the dog. No sounds of traffic, no planes, no power lines, no nothing. I could die tonight, and nobody would know for days. (I like that.)

But I post pictures of the sunset, or the beer I had with my meal, or whatever, and I swiftly hear from people all over, from Newfoundland to out West. It’s amazing, truly.

I know that the popular consensus is that Twitter, et al. are depersonalizing, isolating, and so on. But tonight, I can attest, it feels like I have 100 people over for dinner, and it that ain’t so bad.

Oh, and everything is good, John. Over 10,000 words written, and I cleared some scrub, and tomorrow I clean the boat. Listening to later Son Volt. Wish she was here, wish the kids would call me, but you can’t have everything. 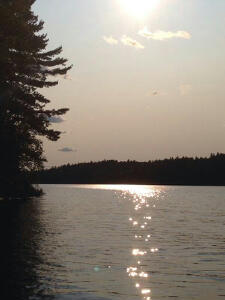 I won’t dick around with you. Unless you deserve it. 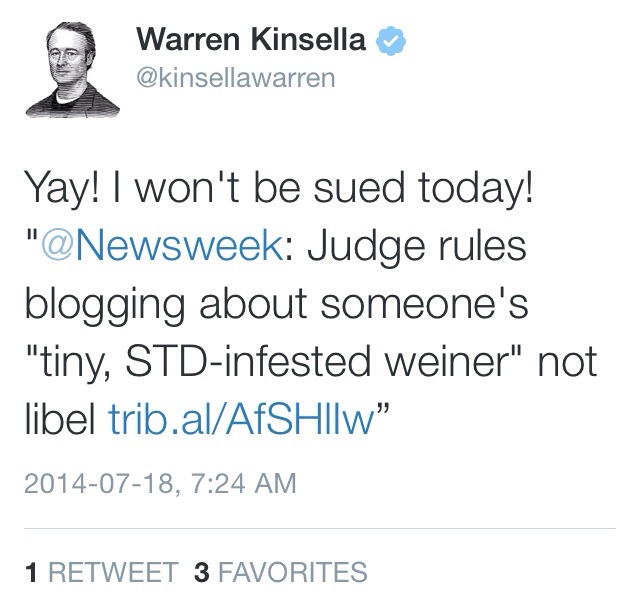 In Friday’s Sun: some games are more equal than others

If this was happening in Toronto, and if the athletes were a bit different, the whole country would be expected to stop in its tracks and take notice.

And, already, that is literally what has happened. This Summer, Toronto’s roads have effectively ground to a halt because of the Pan Am Games. Every major roadway in Canada’s largest city has seemingly been paralyzed by construction-caused gridlock.

Some Pan Am facilities are way behind schedule and way over budget. Meanwhile, Pan Am Games executives are reportedly receiving millions in bonuses – while other high-living execs have been hurriedly replaced amid front-page controversy.

Notwithstanding all of that bona fide scandal, provincial and municipal politicians have fallen all over themselves to trumpet the Pan Am Games. They’ve led rallies, they’ve spent money they do not have, and they’ve generally expected the rest of us to regard the Games – now just under a year away – as important as, say, the Moon landing.

Meanwhile, in Saskatchewan this weekend, another North America-wide athletic competition is taking place. But you’d never know it.

They’re the North American Indigenous Games. NAIG, as it is known, is attracting thousands of athletes from across the continent – from places as far-flung as New York, Florida, Nunavut, and the Yukon. All across Canada and North America, in fact. Just like the Pan Am Games.

NAIG will run from July 20 to 27, in Regina and surrounding locations. There’ll be close to 4,000 athletes in attendance, along with about 1,000 coaches, and thousands of families and friends. Fifteen sports will be represented. Athletes will be representing 21 regions in North America – in all, thirteen from Canada, and eight from the U.S.

Sports being competed include archery, track, baseball, basketball, canoeing, golf, kayaking, lacrosse, rifle shooting, soccer, softball, volleyball and wrestling. (Swimming was facing elimination, because of a shortage of accredited officials, but is now back on.)

The first North American Indigenous Games took place in Edmonton, nearly 25 years ago. They’ve also been held in places like Winnipeg, Victoria, and Denver. The Denver event, in 2006, was managed by individuals who are actually members of the U.S. Olympic Committee.

Sounds like a pretty big deal, right? Sounds important, no?

Scanning media headlines, listening to the politicians, you’d never know it. While the proverbial red carpet has been rolled out for the Pan Am Games boondoggle – while politicians have heaped praise on the budget-busting Pan Am Games and everyone associated with them – NAIG gets barely a mention anywhere, anytime, by anyone.

Apart from small-town media, few reporters have bothered to write or broadcast anything about NAIG to date. No politicians seem to have been clamouring to pay tribute to NAIG or its athletes. I’d wager, as a result, that many Canadians don’t even know NAIG is happening.

You can speculate as to the reasons why. And, full disclosure, as the Dad to an aboriginal daughter who is swimming for Team Ontario, I have my own suspicions. But my daughter – a citizen of the Carcross-Tagish First Nation in the Yukon – is thrilled to be leaving today for Regina. She may not have heard a peep – not a word! – from Toronto’s mayor, her local councilor, the provincial Premier or even Ontario’s Minister of Sport, but she couldn’t be more proud to be waving Ontario’s colours in NAIG’s opening ceremonies.

(There is one prominent figure we’ve heard from, however. Laureen Teskey, the Prime Minister’s wife, met my daughter briefly, years ago, and has kept track of her progress through life. She’s a nice lady.)

Anyway – as a Dad, as a taxpayer, as a citizen, I say: to Hell with you, Pan Am Games. I’ll be in Saskatchewan with my partner for the North American Indigenous Games this week, to loudly cheer on the athletes there.

And I’ll bet we won’t encounter a single traffic jam, budget overrun or scandal along the way.

Perhaps he’s forgotten what he used to say about John. I think someone plans to remind him! 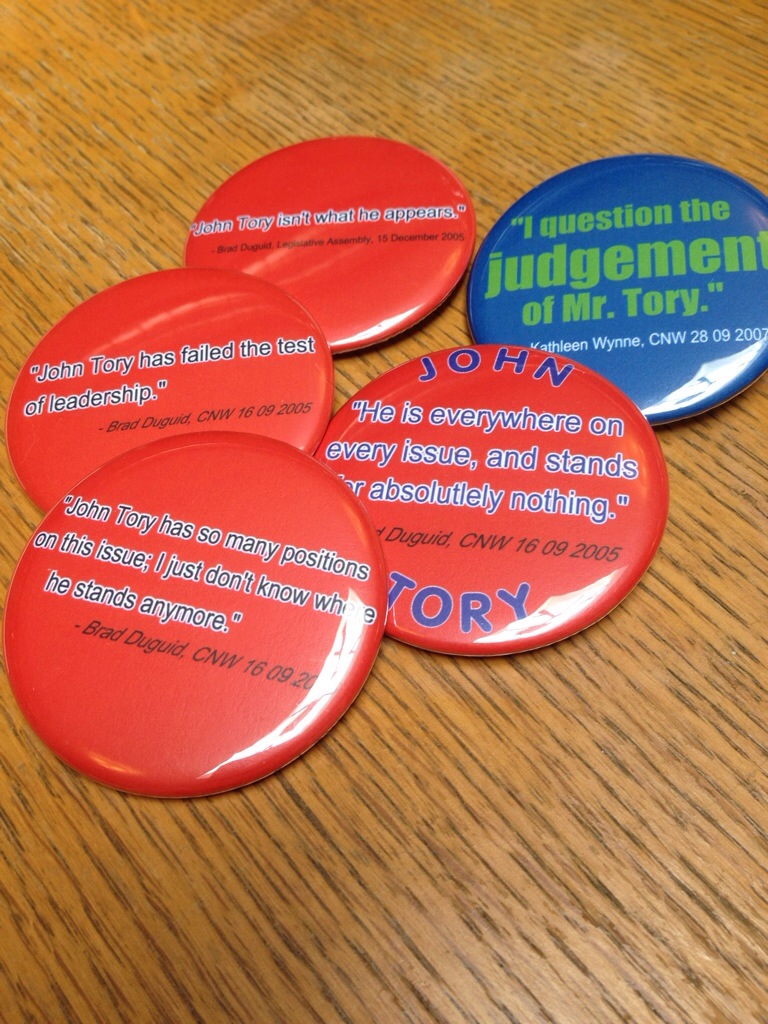