Hey, I have almost as many Twitter followers as Rob Ford has excuses

Somewhere North of 16,000. Justins Trudeau and Bieber, watch out! 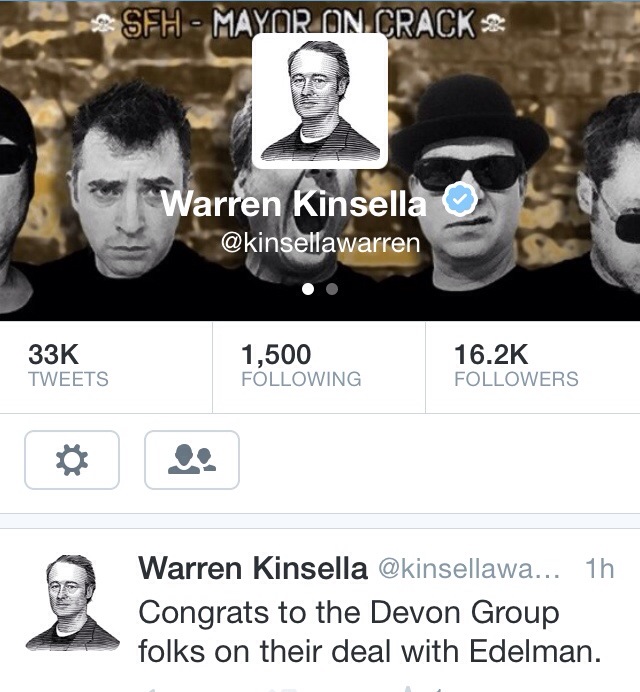 Things are good. The boy is back (and apologized). Talked to someone, was good. Painting again. New songs. Business is rockin’. And the new book is flying out of me – almost 4,000 words in a week.

Question one: watching last night’s results, did Stephen Harper think once or twice about resigning, and finally going to make some real money somewhere? Probably.

Question two: if he goes, what are the implications for Justin Trudeau and Tom Mulcair?

That last one has me somewhere between “it doesn’t matter at all” and “holy cow, it’s a whole new ballgame.”

What do you think, O smart readers of this here website?

This column is being written in advance, but we’ll hazard a guess that the second political happening – the Rob Ford one – garnered about 100 times more interest. Sure, the by-elections were expected to conclude with some surprising upsets. Sure, they were highly relevant to the futures of Messrs. Trudeau, Harper and Mulcair. Sure.

But Rob Ford getting out of rehab would end up attracting far more interest. Why? Why, why, why?

Well, for starters, Ford has actually changed our political culture. He’s obliged us to confront several unpleasant facts about ourselves – about the cult of celebrity, about the irrelevance of scandal, about the fleeting nature of rules.

For example, it used to be that if an elected person got caught in a scandal – say, using hard drugs and consorting with drug dealers – they’d resign. They’d leave, and never come back. They broke the rules, and shame was upon them.

Rob Ford has changed all that. He has no shame. He doesn’t follow the rules. Instead of punishing him for that, we pose for selfies with him. In that way, we’re almost worse than him.

The Watergate scandal? Remember that? It was a real scandal, and it claimed a sitting President. It transformed journalism and American democracy, for a while.

Finally, it is apparent that Rob Ford isn’t actually a person anymore. He isn’t human. He’s more famous than the most famous Canadian – more famous, truly, than Terry Fox and Norman Bethune and Celine Dion and Chris Hadfield. We’ve made him that way. Us.

We’ve rendered him a porcine Kardashian, or a Reubenesque Paris Hilton. He’s accordingly much, much more than a garden-variety politician. He’s a CELEBRITY. And we cannot help but watch him, as he careens through our politics, a wrecking ball made flesh.

Rob Ford has taken several bits of conventional political wisdom, and stomped all over them. And many people – particularly those people who never thought there was anything noble or redeeming about high public office – think Rob Ford is still worth voting for. Because they already thought all politicians were liars anyway.

Full disclosure, as they say: I am volunteering for another candidate for Toronto’s mayor. I called her up on the same day I listened to my 11-year-old in the back seat, laughing with his friends about crack cocaine.

“Crack cocaine isn’t funny, guys,” I said, amazed that I would live long enough to ever have to say such a thing. “It can kill you.”

And, at that moment, I figured I needed to do everything I could do to drive that bastard from office. Right then and there.

Like I said at the start: those by-elections – and I hope my friends Arnold, Joe and Kyle won in three of them, by the way – are far more important. But here we are, again, all talking about goddamn Rob Ford instead.

I need a drink.

Rob Ford is back, and he’s lying already – about his fiscal record

Rob Ford is back, like a stain in the carpet that you can’t scrub out

So I figured it’s time to reprise a video that kind of says it all about his “record” – which John Tory and Karen Stintz supported every step of the way, by the by.

There’s no other way to explain their reliance on “internal” polling by John Tory, about John Tory. Nate Silver in the New York Times on such “polls,” here.

UPDATE: And here’s what the governing body for Canadian pollsters says about the Globe and Mail’s single source: “The actions of Campaign Research have likely caused the Canadian public to lose confidence in marketing research and have tarnished the image of the marketing research profession.”

I can understand why John Tory’s desperate, pathetic, flip-flopping’ campaign would be interested in seeing the Globe regurgitate the crap of the guy who (a) gave us Rob Ford (b) has achieved past distinction, inter alia, for being criminally charged for making death threats.  But how, pray tell, is it in the Globe’s interest to diminish their reputation in this way?

Shocking as it may be, Canada’s best-loved geriatric punks have abandoned punk rock. As you will see in the video below, SFH has decided to become modern, and the resulting tune – ‘Eighties Dance Song’ – will be the biggest hit of the year.

What is Davey singing? I don’t know. I think it is: “I’m going to Spain for three weeks, and I’m convinced the other guys are going to kick me out of the band.”

In Tuesday’s Sun: at least one guy knew he was “just visiting”

What I want to know is this: when he told Harvard University that he was indeed returning to a full-time teaching position in Boston – when he signed on the dotted line, and finally confirmed that he was indeed “just visiting” – could Michael Ignatieff hear a cock crow, somewhere, for the third time?

If he didn’t, the rest of us sure did. Now that he has fulfilled the political prophesy about him, what more is there to say about Michael Ignatieff?

Unlike 2011, when all of the Liberal Party was highly indignant about the Conservatives’ multi-million-dollar “just visiting” attack ad campaign, no one jumped to defend Ignatieff’s integrity and patriotism this time. Just a few lonely voices online, mostly saying everyone should just leave him alone. The popular reaction was one of disdain, not anger.

It’s not like the two men don’t know each other. Back in 2010-2011, Trudeau was regularly spotted in 409-S, the Opposition Leader’s offices (now occupied, thanks to Ignatieff and his adroit campaign staff, by one Thomas Mulcair). He would attend meetings with Ignatieff and other senior caucus Liberals in the boardroom, winking merrily at staff along the way.

In those days, Trudeau was nominally part of the Ignatieff circle of advisors, but he also sort of wasn’t. He was there, but he wasn’t there. When a big decision was being discussed, no one ever said: “We should check this out with Justin first.” Ever.

In retrospect, it appears that Justin Trudeau was shrewdly playing the long game. The previous leader, Stephane Dion, barely disguised his lack of enthusiasm for Pierre Trudeau’s eldest son. He made Justin’s life difficult.

Ignatieff didn’t do likewise, but it was clear he relied on his old nemesis/bestie Bob Rae far more than he ever relied on Justin Trudeau. He regarded Trudeau as “young.” Trudeau, for his part, looked quite content with that.

It is possible that Trudeau knew the train-wreck that lay ahead, and wanted to be far from the wreckage when it happened. It is possible – even likely – that he knew that Ignatieff did not connect with everyday people in the way that he did. After all: even in those days, Justin Trudeau was far more of a fundraising draw than Michael Ignatieff.

So, he bided his time. When the Liberal Party of Canada was reduced to its worst showing in history, and Ignatieff lost his own seat, Justin Trudeau was the first name on every Liberal’s lips. Not Bob Rae. When Rae finally accepted this – bitterly, reluctantly – the table was set for Justin. The leadership race was a mere formality.

Justin Trudeau – as the increasingly-frustrated Conservatives are learning, with their attack ads that barely register on voters – does politics the way he boxes: he plays the long game. He undersells, and then he overpowers.

Evidence of Trudeau’s long-game strategy found in this week’s sad return of Michael Ignatieff to Harvard.

It is not a case of Michael, we hardly knew ye. It is more a case of: Michael, Justin Trudeau knew you better than you knew yourself.