In Tuesday’s Sun: why everyone should vote for Joe Cressy

Conventional wisdom says the New Democrats are going to lose plenty of seats to Justin Trudeau’s Liberals in the 2015 general election.

Conventional wisdom also says the NDP are going to lose their official opposition role – to either the Liberals or the Conservatives – and be returned to their traditional role as the third party in the House of Commons.

Joe Cressy – who you might not know much about, but will soon enough – is a handsome young fellow seeking the the NDP nomination in the Trinity-Spadina riding in Toronto. He is not just one of the most organized and committed guys I have ever met in politics – he is also the most likeable.

Oh, and this: If NDP leader Thomas Mulcair had a national army of guys like Joe Cressy, he’d have the biggest majority in the history of Canadian democracy.

Now, Joe is going to be mad at me for saying this kind of stuff, but too bad. Over the past year or so, Joe and I have become – full disclosure – very good friends. We got together to volunteer on a potential municipal election campaign and, despite our alleged ideological differences, we hit it off big time.

His mom told me once that she would prefer I call him Joseph. So, periodically, I do so. When I do, Joe winces. To everyone in Toronto politics and media, you see, he is just Joe.

No one knows if the guy called Joe is going to win the NDP nomination in Trinity-Spadina, which has been held by the party for many years. But it’s a pretty safe bet he will. The New Democrats very much want to hold the downtown Toronto seat in a byelection that is expected to come sooner than later.

If Joe is the NDP candidate, he will win. He is assisted, in this regard, by his opponents.

The Conservatives are only protected in Trinity-Spadina by endangered species laws. The Liberals, meanwhile, have made a bit of a mess of the riding.

Here’s why. When he won the Liberal Party leadership, Trudeau promised he would not intervene in riding nomination battles.

In the view of not a few Liberals, Trudeau didn’t keep his word. He certainly seemed to make his preference known in another Toronto riding, Toronto Centre. Then, last week, he much more directly intervened in Trinity-Spadina, saying he would not permit a woman who had run there twice before to run again.

The woman is married to a man who formerly held the riding for the Liberals. Apparently the man used angry words with some young Liberals, and so his wife is being denied an opportunity to participate in the race.

As someone who has used angry words with young Liberals since the dawn of time, I found this claim highly suspect. I also found the notion that a woman would be penalized for the alleged sins of her husband to be more sexist than anything heretofore seen in Canadian politics, and that’s saying something.

But back to Joe. His departure from the municipal campaign we were both working on is a big loss.

But, bottom line, this guy has got it. He’s the kind of person we need more of in Parliament.

I’m a dirty rotten Grit, but if I lived in Trinity-Spadina, I’d sure vote for Joe Cressy.

If you live there, you should, too.

In Sunday’s Sun: the pendulum swings back

Are progressives on the march?

Some days, it sure looks that way. From the European Union to the Americas, progressives – Liberals, Democrats, New Democrats, Liberal Democrats – increasingly seem to be pushing back the blue conservative tide.

It wasn’t always thus. Less than two years ago, I wrote a little book called Fight The Right. (It makes an excellent Christmas or Hanukkah present, by the way.) The subtitle of Fight The Right was “A Manual for Surviving the Coming Conservative Apocalypse.” And that was the book’s central theme – that conservatives, from Europe to the Americas, were increasingly winning elections.

A couple years ago, conservatives were on the ascendancy, for all sorts of reasons. They were better funded, thanks to their well-heeled big corporate backers. They were better organized than at any time in their history. The corporate, rightist media adored them. The politics and economics of the era seemed to favour them, too.

And – up here in the Great White North, at least – there was plenty of division and disunity on the left, and lots of splitting of the vote. The right was taking advantage of that, election after election, and coming up the middle to win.

Two years ago, there was a rising right-wing tide everywhere. From Rome to Riga, from Maine to Miami, from Whitehorse to Witless Bay, conservatives were the team to beat. Most of the European Union was governed by the right, with nearly all of the EU’s 28 member states being ruled by conservatives.

In Canada, conservative parties ruled the roost in B.C., Alberta, Saskatchewan and of course nationally. There were (then popular) right-wing municipal bosses, like Rob Ford. And, down in the U.S., the Gallup poll was reporting that just about half of all Americans considered themselves conservative – or very conservative.

Only a tiny percentage of Americans – a miserable 20% – called themselves “liberal.”

Well, that was two years ago. Times are a-changin’, to quote the bard.
In the U.S., despite facing a Republican challenge financed with billions of dollars, Barack Obama came back with a convincing victory. In the European Union, many of those conservative leaders – in Italy, in France – are gone.

And, here in Canada, Conservatives can’t seem to chip away at the popularity of Liberal Leader Justin Trudeau. Despite spending buckets of dough on attack ads, and despite lots of nasty politicking, Trudeau has maintained a healthy lead in the polls for many months. The NDP’s Tom Mulcair remains competitive, too.

And that’s just the temporal world. Even on the spiritual level, it seems like progressives are winning the day. A year ago this week, Francis became pope – and he immediately became the world’s most influential progressive leader, challenging the Roman Catholic Church’s orthodoxy on everything from capitalism to gay rights.

Pope Francis has been a revolutionary, in virtually every sense of the word. He has hammered the greedy excesses of capitalism in apostolic exhortations. He’s suspended bishops who are more into those who have bling, rather than those who were broke.

Rumours of the left’s death were premature, to say the least. My own prediction of a right-wing hostile takeover wasn’t entirely accurate, either. The ideological pendulum – which had been careening off to the right – is now swinging back to the centre, and the left.

There’s all kinds of reasons for why that may be. Post-recession jitters have faded. Stimulus spending worked. Austerity measures are increasingly unpopular. Voters are just plain sick of conservative policies and politicians.

Whatever the reason, one thing can’t be disputed: progressives are getting competitive again, from the Vatican to the EU to the Americas.

And those on the right? Check your rear-view mirror.

That’s the lefties you see – and we’re getting closer.

Rare shot of Olivia at her campaign launch 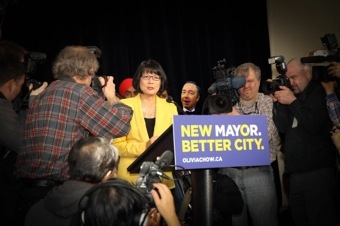 I told Lilley I thought I sucked, but I’ll leave the reviews to you guys and the historians.

And, yes, I asked Olivia Chow six of the nastiest, meanest, rottenest questions I could come up with.  If I’d done anything else, the whole segment would have been a waste of time.  Watch to see how she did.

We’ve even got the Sun!

Okay, not really. But it’s fun – particularly on a day when I have taken over Lilley’s Byline. 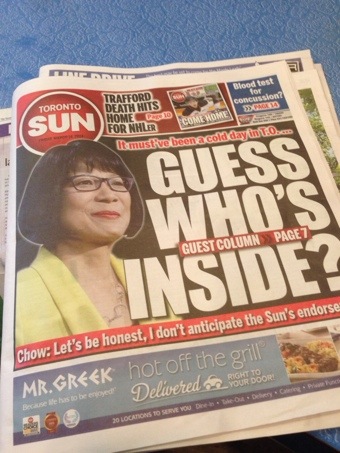 I’ve never been charged criminally with making death threats, or found guilty of serial ethical lapses, but I thought this cartoon by my long-time web friend Brett Lamb was funny.  Thanks for giving me hair, big guy. 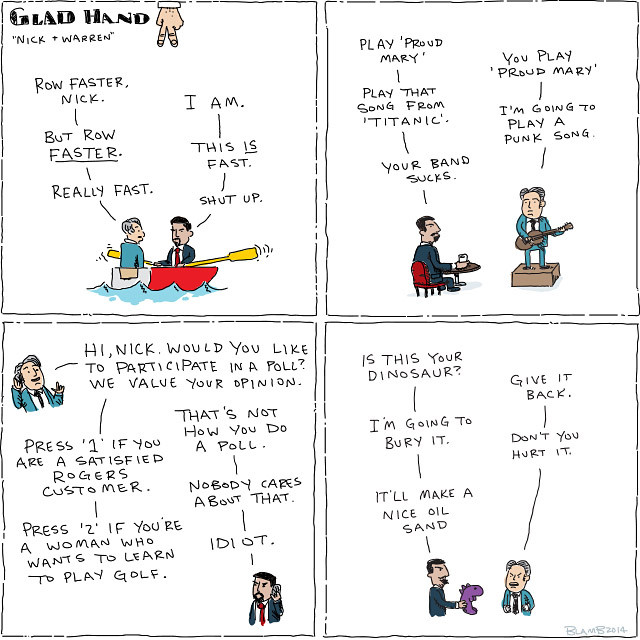 I forget something. Strombo notices. 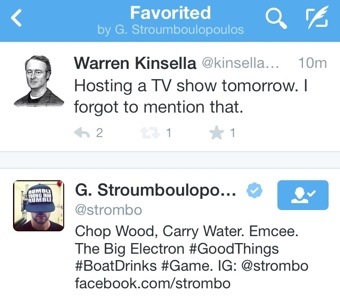 I like it. (And, yes, before you ask, she did experience some facial paralysis recently. So perhaps John Tory’s campaign can mock that, just like they mocked Jean Chretien’s facial paralysis.) 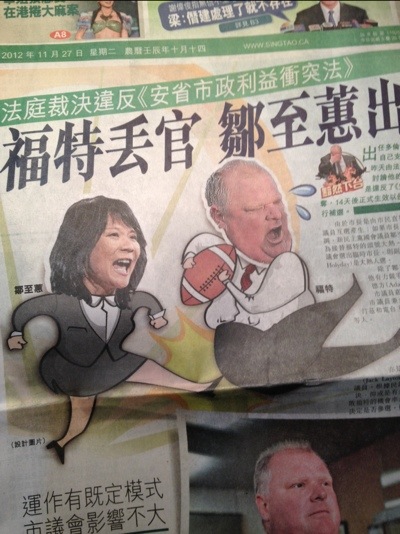 A statement for and about the new age

Me: Hey, look, Twitter’s down.

Colleague Aaron: Yeah, I know.  And I can’t even tweet about it.