“Currently seem poised to take back the province”?

The Quebec Liberals did “retake the province,” folks. Was in all the papers – including, perhaps, yours.

Tonight, my Dad gets to ask Mr. Nash his question

He always wondered why they changed the theme music to The National. Tonight, I hope he gets the chance to ask him. 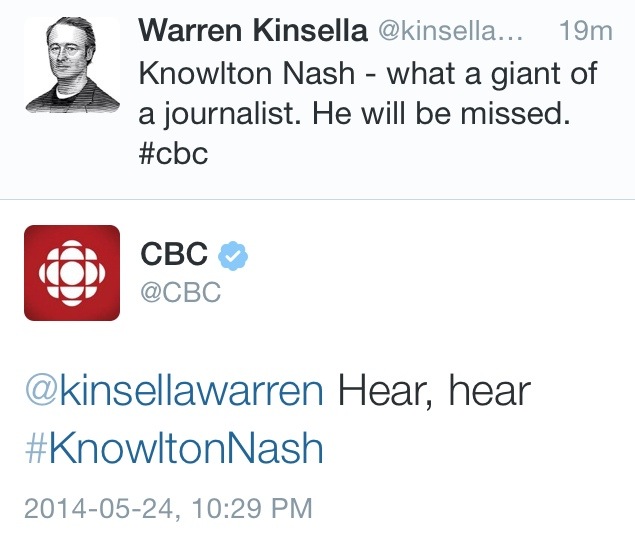 My view at the moment

Wish you were all here.

Well, most of you, anyway. 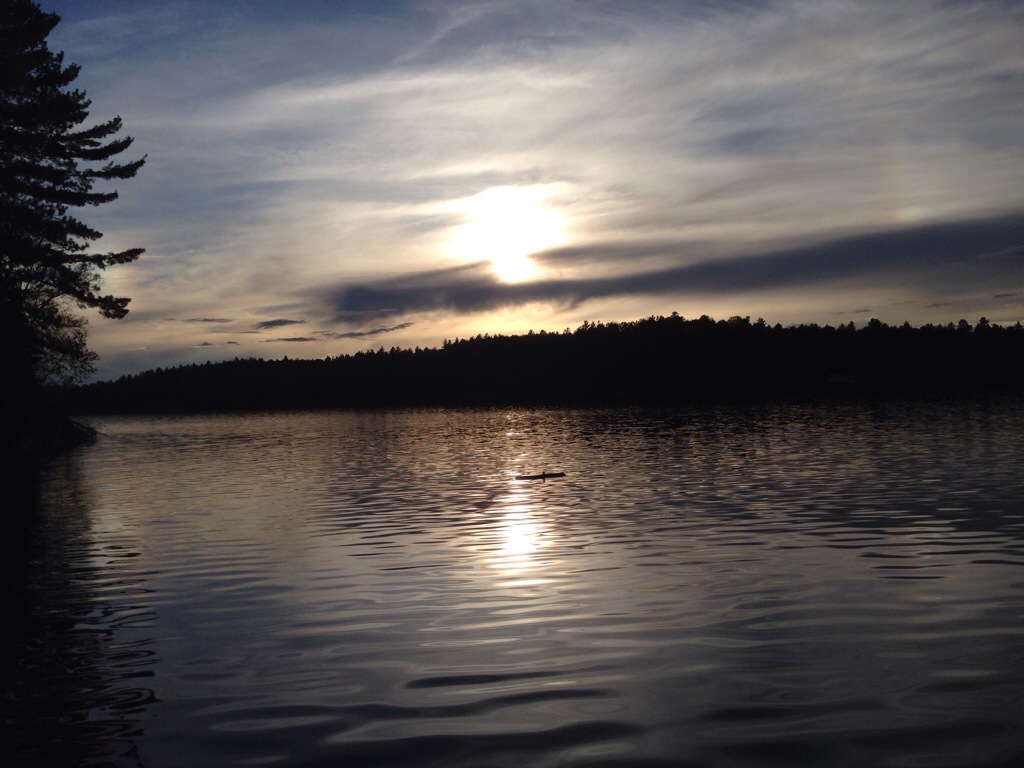 This is interesting.  When the CBC and the Star were coming after LIUNA (mainly for the offence of Working While Italian), the union took a proactive approach – and contacted the police themselves. It’s referenced in the video below.

Reminds me of what Chretien did with sponsorship.  I suspect LIUNA will similarly benefit from being proactive, instead of reactive.  Companies/unions/NGOs with issues management challenges, take note.

Hey, Public Safety and RCMP: do I scare you?

“Bureaucrats, for example, bumped around a copy of a head-scratching open letter posted by Sun columnist Warren Kinsella on his blog. In it, he calls on Anonymous to get involved by attacking the Nova Scotia NDP or the RCMP.

Just the same, Public Safety passed it around internally, and then sent it to the RCMP. In one particularly telling exchange from the bureaucrats, one staffer emails the other to ask if they’ve “been following the news about Anonymous’ rampage,” and wonders “what can be done to stop such embarrassing attacks?” They note it was the lead story on CBC’s The National.”

I’m suspicious about the source – Ling is a proven ding-a-ling, in my view – but I have to say that, if true, this little snippet makes me happy.  Any day this web site makes Public Safety and RCMP elf lords nervous is a good day.

Now that he has reopened the abortion the debate – and, rest assured, Justin Trudeau has done so – what next? Who wins, who loses?

Trudeau himself is both a winner and a loser.

At the centre of a Parliament Hill scrum a few days ago, the Liberal leader said “our position as a party is we do not reopen [the abortion] debate,” which was reasonable enough.  Since the Supreme Court of Canada’s 1988 Morgentaler decision – which jettisoned criminal laws relating to abortion – successive Prime Ministers have carefully steered away from the issue, which is the third rail of Canadian politics.

Messrs. Mulroney, Chretien, Martin and Harper all vowed to never, ever reopen the abortion debate. And they didn’t. So Trudeau’s position was an eminently sensible one.

But, looking a bit unsure in that now-infamous scrum, Trudeau didn’t stop there.  As reporters’ eyebrows went up, Trudeau said: “We are steadfast in our belief [in the Liberal Party], it is not for any government to legislate what a woman chooses to do with her body. That is the bottom line.” And then, leaping into the abyss, he reopened the issue he had said he didn’t want to reopen.

Said he: “I have made it clear that future candidates need to be completely understanding that they will be expected to vote pro-choice on any bills.”

In the days since he uttered those words, Trudeau has been engaged in uninterrupted damage control.  As bemused Conservatives and New Democrats looked on, Trudeau’s policy contortions have been something to behold. Over the past few days, Trudeau has said his party is pro-abortion, and its MPs are expected to vote that way without exception – but he has also decreed that anti-abortion candidates are welcome, and (presumably) so too anti-abortion thoughts.  That is, pro-choice if necessary, but not necessarily always pro-choice.

If that makes no sense to you, rest assured: it makes sense to no one else, either.

While the pro-life and pro-choice forces typically disagree on everything, they probably now concur on two slender points.  One, Justin Trudeau wasn’t telling the truth when he said he wouldn’t interfere in the selection of Liberal Party candidates – by telling them how they must vote on a matter of conscience, he was fundamentally involving himself with candidate selection.  Two, he wasn’t telling the truth about not wanting to “reopen the abortion debate,” either – he has now done precisely that.

But Trudeau is not necessarily a loser, now.  On Wednesday, Ottawa Bishop Christian Riesbeck told CBC that Trudeau’s stance was “unseemly.”

“It’s the fact that he considers himself to be a devout Catholic but then adheres to, or advocates for, abortion,” said Riesbeck. “That is scandalous.”

Scandalous? With that, the Bishop has mapped out an escape route for the relieved Trudeau. As Stockwell Day learned the hard way, Canadians favour a wall between Church and State.  They don’t like politicians involving themselves overmuch with religion.  And they don’t like the religious involving themselves, at all, in politics. As such, Bishop Riesbeck has gifted Trudeau’s relieved backroom with what they urgently needed: a way out of the mess they created for themselves.

Whenever the clergy start attacking me about something, a former Prime Minister once remarked to this writer, it helps get me re-elected. The same holds for Trudeau.

The Conservatives and the New Democrats have emerged as winners, too, and without doing very much. Pro-life voters will continue to gravitate to the Tories, convinced that there is no home for them with the Grits.  And for those pro-choice folk who favour no ambiguity, they will find a home with the New Democrats.

So, who loses, at the end of this sad political melodrama?

Will they blame the Liberal leader for reopening the debate? Who knows. But one thing is for certain: it has not been Justin Trudeau’s finest hour.

What works in a political TV spot, and what doesn’t

Here’s a few I happen to like, and which I happen to know, um, a little about.  They’re not “negative” – they’re telling the truth about the public record of an opponent in an election, and that’s part of what democracy is all about.

Seriously, don’t they know geriatric punk rock stars when they see them?

Ontario: who is a political ad for? (updated twice)

Not for you, highly-informed reader of Canada’s Best-Loved Political Website™.  Not for you, or people like you.

Let me explain. This morning, I heard The First Ever Academic To Understand Political Ads™ on CBC Radio: Prof. Peter Graefe of McMaster said that political ads are for people who don’t pay attention to politics.  They’re a shortcut. They’re designed to be simple.  They’re for the uninformed.

Finally! Finally, an academic who gets it! Yay, Peter Graefe!

Geddit? So, the Ontario campaign’s ban on political spots ends tonight.  But, already, the political parties have telegraphed the themes they will be pursuing over the next while.  Here are they are, below.  I like two of the three.  Can you guess which ones, and why?

And, remember: don’t be an egghead.  Watch ’em, as I always advise, with the sound off – and as Joe and Jane Frontporch would: without much prior knowledge.

UPDATE TWO: Quote from commenter that made me laugh out loud, really loud: “With the sound off the Liberal ad looks like I’m being chased down the street by Graucho Marx.”