Who should be more worried?

The guys who are the focus of all this attention – or the guys whose top-secret memos are leaking all over the place?

And if the leaks are deliberate, are they really helping the Cons? I don’t think so.

Best part of Susan’s story: a bonus reference to Yours Truly! (Dimitri was highly, highly complmentary towards the Boss, by the way. I would’ve thrown bread rolls at him if he hadn’t been!)

This is the best video about Ford Nation

Don’t watch that one of Dumb and Dumber. Here’s the one that tells you the truth about their record.

Has this ever happened before? Bonus: free political advice

Canada being tops in medals, that is. I know it could change, of course, but if I were Stephen Harper, I’d figure out a way to get that budget voted down, and have an election right now. 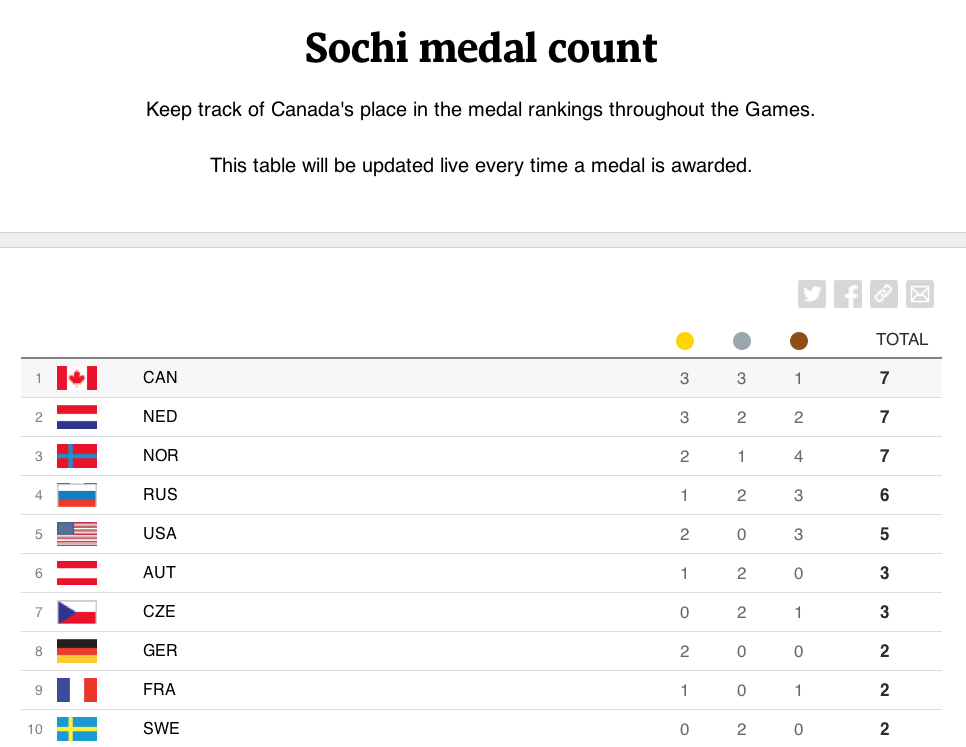 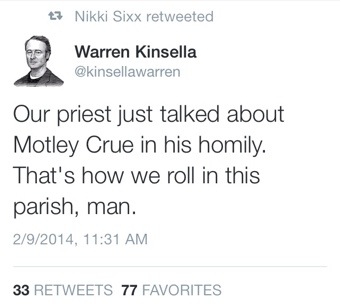 You may be unfamiliar with Irwin Cotler’s name – he was a politician, but a quiet one. He was totally unlike many other politicians, in fact. He was not a shouter, or a showboater. He was one of a kind, and – even you didn’t know about him – it’s also a fact that our politics were elevated by his presence.

The Montreal Liberal MP this week announced that he will not be running again. For his party – for his constituents, for Canada – it is a big loss. Cotler is, truly, a giant in a political landscape populated by lilliputian underachievers.

Take a look around. In today’s House of Commons, we remain cursed with the ongoing pestilence of Rob Anders – who called Nelson Mandela a terrorist, and who literally falls asleep on the job. We still are obliged to listen to the likes of Pipsqueak Pierre Poilievre – who, coincidentally we’re sure, announced election-fraud reforms on the very day the supposedly-independent RCMP charged two ex-Senators with fraud.

And, if that wasn’t enough to make you depressed, we have a new MP – Liberal MP Chrystia Freeland – heckled Tuesday in the Commons (and mocked by a Vancouver media troglodyte) for, wait for it, the sound of her voice. Use your “big girl voice,” the media misogynist said.

It is an ugly, unintelligent political culture. But Irwin Cotler stood above and apart of all that. He was the kind of leader our parents used to tell us about: a dignified, decent, brilliant man. A statesman.

In Canada, ironically, Cotler didn’t ever quite achieve the sort of fame bestowed on him internationally. Around the democratic world, however, Cotler was rightly regarded as a human rights expert, and he was therefore regularly consulted by governments in Israel, the United States, and places in between.

He was legal counsel to the aforementioned Mandela, and an advisor to Soviet dissident Natan Sharansky – who later became Israel’s Deputy Prime Minister. Cotler acted as lawyer to the wrongly-accused Maher Arar. He defended both Palestinians and Israelis against their own governments.

He was a moderate, too, in a time when extremists rule the podium and the pulpit. Unlike Harper and a few demagogues within the Jewish community’s leadership, Cotler did not regard fair-minded criticism of Israeli government policy to be “anti-Semitic.” For that, he was reviled by some far-right special interests. But Cotler knew that true democracies – and Israel is indisputably one – must always be prepared to take, and consider, reasonable criticism.

Since 1999, he has represented the Mount Royal riding once held by Pierre Trudeau, racking up huge majorities. For a decade, the Harper Conservatives were obsessed with defeating Cotler, but without success. He won every time. (Their last challenger, a man they devoted considerable resources to help out, is now facing fraud charges in the Montreal municipal politics scandal.)

The last time I saw Cotler was at the anti-climactic Ottawa gathering that saw Justin Trudeau annointed Liberal leader. We surrounded Cotler, beseeching him to run again. He demurred.

But it is. Cotler’s much-admired right-hand man, Howard Liebman, will likely keep the seat for the Grits. But his boss leaves a legacy that will be difficult to match.

Politicians get criticized all the time for their shortcomings, and rightly so. It isn’t a rare thing.

Much rarer are politicians like Irwin Cotler, who radiate wisdom, courage and good judgment.

You may not know of him – but you should know this: our politics is greatly diminished by his departure.

I had this commissioned, and it cost me a million bucks, give or take. From left to right, Davey Snot, Bjorn Von Flapjack III, Winkie Nuclear Age Smith. Clip and save. 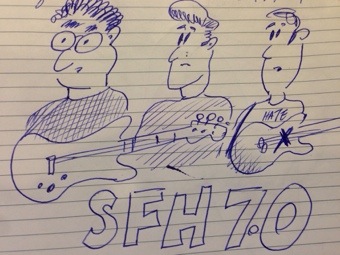 Question Time! “Warren, are you going to the Liberal convention thing?”

“Quite a few of you have asked me this, and God knows why. But, no.

One, I’m too busy at work and with my kids.

Two, I don’t understand the Liberal party’s insistence on having conventions in the dead of winter, in the coldest parts of the country. It’s stupid.

Three, one of Trudeau’s senior advisers contacted a campaign with which I may or may not be associated, and suggested there would be…consequences. Apparently they were upset about the column I wrote about the move they made in the Senate. I am not making this up.

Good thing I don’t write a politics column in the biggest newspaper chain in the country, etc.”

I clicked on the little button, and voila! My own computer-generated movie.  It picked the images all on its own, determined by what was clicked on the most, apparently.

What did it reveal about my Facebook friends? That they are all interested in Jean Chretien, a bit of punk rock, and they’re perverts.

Hayley Wickenheiser, Feist, Alison Redford, Danielle Smith, and a bunch of others.  The men who went there? Aside from Tewksbury, Yip, and assorted athletes, not as notable.