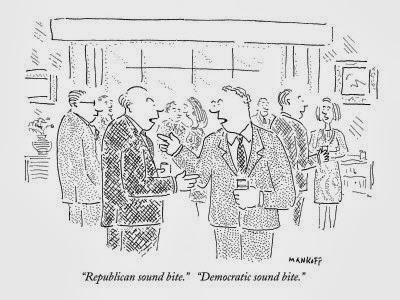 Makes you wish we had Ken Dryden again, doesn’t it?

Mark Adler, that is. The Conservative York Centre MP was notable only for one thing, before this week. He was the guy who beat Dryden, the respected lawyer, the bestselling author and the former NHL star. That was his sole achievement: he somehow beat Ken Dryden, whose skates he is not fit to sharpen.

Thereafter, Adler drifted into the well-deserved obscurity that is the Conservative backbench. Like most of the nullities who applaud every bit of flatulence emanating from the Prime Ministerial nether regions, Adler became famous for doing, and saying, nothing of consequence.

Last week, as we all know by know, Mark Adler became a bit better-known, but for all the wrong reasons. Sounding like a petulant child, Adler whined and pleaded with a PMO staffer about getting into a photo with Harper in Jerusalem. It’d be the “million-dollar shot,” he mewled. He got overheard. A nation laughed.

The Million Dollar Shot Man is now the punch line in the ongoing joke that is much of Harper’s backbench. He is the nobody who cravenly whinged and wheedled about his desire to become a somebody.

He isn’t. He was background scenery, he was a prop, on the trip that (per Rick Saultin, no anti-Semite) saw Canada become “a province of Israel, at least when it comes to foreign policy.”

For Harper, and for a whinnying underling like Mark Adler, it was not enough that we lost a seat on the UN Security Council.  Or that nobody really listens to us internationally anymore. No, for Harper, it was essential that Canada also become an appendage of Israel’s governing Likud Party.  So he, and the Million Dollar Shot Man went to Israel, at taxpayer expense, along with several dozen Conservative Party donors and not a few kooks.

Quite the trip Harper and Co. had to the Middle East! If their objective was to annihilate the name Canada built up during the era of Nobel-winning Lester B. Pearson – as a smart, strategic player on the international stage, one whose voice was more respected than any other non-superpower – well, they did that, in spades. They blew it to bits. Oh, and if you disapprove or disagree? You’re an anti-Semite, like Nelson Mandela.

When criticized about Harper’s servile approach to the Likud Party, Conservative grovellers – like the repugnant Chris Selley, ever-ready at the National Post – will say: “Well, at least he knows where East and West Jerusalem are, unlike that Chretien poltroon!”

Whatever. Not always knowing where one part of Jerusalem ends, and where another starts, is a lot better than the Harper regime’s approach approach: that is, to say that all those squiggly lines on Middle Eastern maps should be redrawn to accommodate the formidable ambitions of Benjamin Netanyahu.  And to Hell with anyone else.

We all knew it was going to be a fiasco of a trip, an extended lullaby to Likud, long before it happened. But few expected it to be this bad.  Messrs. Adler and Harper outdid themselves: they’re as crappy at foreign policy as they are at domestic policy.

Ken Dryden, a nation turns its lonely eyes to you.  Come home, soon.

I tried to think of something warm. This is what I came up with.

I don’t know about you, but the next person who says to me (a) “Is it cold enough for ya?” and/or (b) “This is a real Canadian winter!” is going to have a three-foot-long icicle driven through their tiny black heart. By me.

Sick to death with Winter 2014 as I am, I tried to think about happier, warmer times and climes.  This is what I came up with: me and the Palma Violets in L.A. in August, doing the Hot Nasties ‘Invasion of the Tribbles.’ 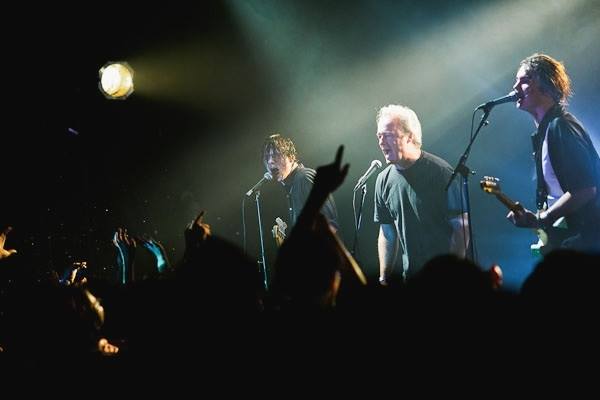 A Raymi the Minx original

Unbeknownst to many, I suspect, she is a very good painter. I purchased the painting below from her some years ago. I have yet to receive it.

This is become a bone of contention between Canada’s most read-blogger and me. Periodically, I demand that my painting be liberated from its originator. Today, at long last, she has pledged to get it to me.

In the meantime, I offer it to you all for your viewing pleasure. It is very good, and I am happy that it soon will be home with me. 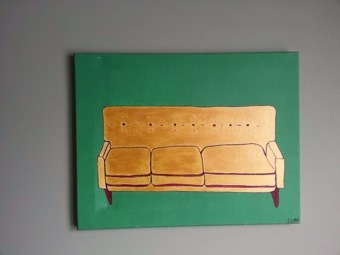 In Sunday’s Sun: when you call someone one of the worst things you can call them

Of all the serious accusations that can be made, calling someone an anti-Semite is among the most serious.

What is it? The United States Holocaust Memorial Museum in Washington – where I have taken ashen-faced school kids on tours, to see the horror that real anti-Semitism causes – is a good place to seek a definition. The museum simply defines anti-Semitism as “prejudice against or hatred of Jews.”

Hatred of Jews, the museum notes, preceded the coining of the term anti-Semitism in the modern era. Jews had of course been the target of pogroms, violence and discrimination long before anyone came up with a name for it. Generally, however, “anti-Semitism” is defined as hatred of Jews – Merriam-Webster, Oxford and Britannica all say so.

Calling someone an anti-Semite, without justification, is defamatory – and it could get you hauled into court. In 2008, a former federal Liberal candidate Lesley Hughes sued Conservative cabinet minister Peter Kent, B’nai Brith and the Canadian Jewish Congress for suggesting that she had published anti-Semitic articles. Four years later, the case settled, and the defendants issued a statement that “accepted and affirmed that Hughes is not an anti-Semite.” An earlier 2001 New Brunswick Court of Appeal case found similarly: calling someone an anti-Semite is defamatory “on the face of it.”

Brian Shiller is a Toronto lawyer currently litigating a case in which “anti-Semite” is important. “Calling someone anti-Semitic is defamatory,” says Shiller (who, full disclosure, has also been my lawyer in libel cases). “It’s very serious.”

No less than Nobel laureate, and one of the greatest men of our time, Elie Wiesel, agrees: “We must be very careful because to level an accusation of anti-Semitism is the most serious accusation.”

Which leads us to the simply extraordinary speech Prime Minister Stephen Harper made in Jerusalem this past week. The speech was extraordinary because Harper, a Gentile, literally took it upon himself to re-define anti-Semitism.

We can speculate as to why he did so. Harper was hoping to curry favour with his Likud Party host, Israeli Prime Minister Benjamin Netanyahu. Or, he was seeking to broaden the political support he enjoys in the Jewish community back home. Or, he honestly believes that any criticism of Israel at all – any – is anti-Semitic. Is it?

Sun Media’s David Akin, and others, certainly interpreted Harper’s speech to the Israeli Knesset as I do. Akin’s story was headlined: “The Harper doctrine: you’re all anti-Semites.”

Reading the speech, the headline is fair. Said Harper: “intellectualized arguments against Israeli policies” are the “new anti-Semitism.” Those are quotes.

That definition goes much, much further than the Holocaust Memorial Museum, dictionaries, and even Elie Wiesel himself. “You cannot apply it to everyone” who periodically criticizes policies of the Israeli government, Wiesel warns. It is “a terrible word.”

Indeed it is. The question Harper must now ask himself, then, is whether Nelson Mandela was an anti-Semite – he not-infrequently criticized Israeli government policy as it relates to Palestine. What of successive Popes? The Vatican has held the longstanding view that the Israeli government’s policies with respect to Jerusalem and the territories are wrong-headed.

How about American Jews? A recent Pew survey found that 48 per cent of them were critical, or highly critical, of Israeli government peace policies. Does Harper regard half of America’s seven million Jews as anti-Semitic, too?

And so on, and so on. You can see where this is going: extending the definition of anti-Semitism may assist Stephen Harper politically, but it doesn’t really help those who are the actual targets of anti-Semitism. In a democracy – and Israel is one – occasional fair-minded criticism goes with the territory. It is the territory, in fact.

“An anti-Semite used to be a person who disliked Jews,” someone once said. “Now it is a person who Jews dislike.”

Words worth pondering, Prime Minister, as you return to Canada today.

We get letters: a sports fan writes

And he sure is angry! Drop him a note – tell him how you feel about him!

Name G Tryon
Email trygor@shaw.ca
Subject Olympics Meddler
Message I’d like to see you take your big mouth small balls cancel-Sochi message down to the locker room and tell the jocks who’ve given years of blood, sweat, and tears for their chance in the sun that’s it’s all off because little boy Warren’s got a peeve with big bad Putin. The only thing coming “off” would be your own empty head.
Site http://warrenkinsella.com

It’s a real poll, from a real pollster. And it suggests that Trudeau isn’t particularly doing anything – he’s simply doing a good job of not being Stephen Harper.

Am I right or am I wrong? Outlier poll? Trend? Justin Bieber? Bueller? Bueller?

Can you spot the white, millionaire, out-of-touch conservative? 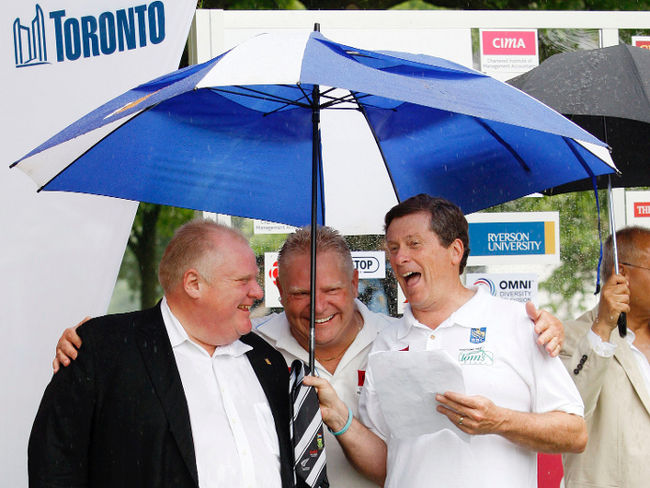 “No man is rich enough to buy back his past.”
― Oscar Wilde 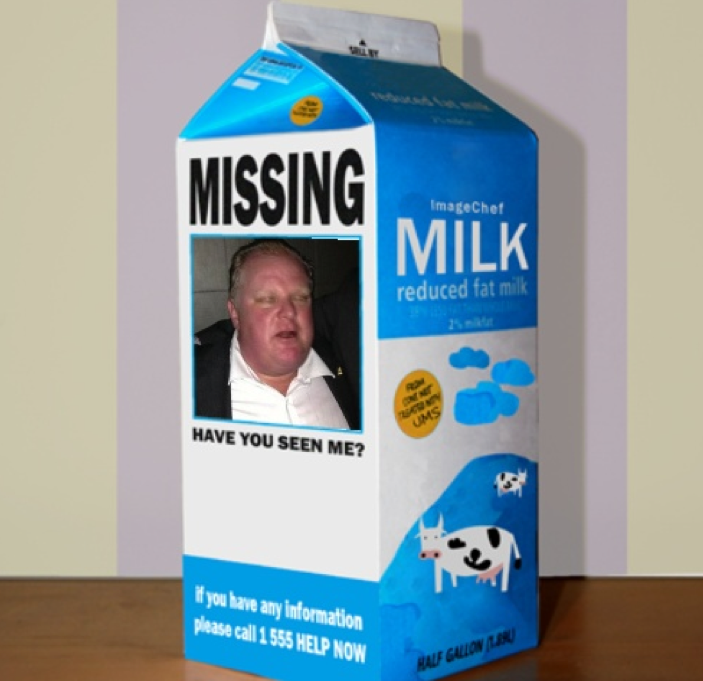 I just wanted to say “hats off to you” for calling a spade a spade when it comes to questioning the way CIJA and all the establishment Jews in Canada are falling all over themselves when it comes to praising Harper.

I’m going to take my hits as well for trying to expose the hypocrisy involved in his taking along a staggering number of acolytes to Israel – I just got the complete list from the PMO – 210 names, not counting press and other hangers-on.

Read my own comment that I just posted on our website at http://www.jewishpostandnews.ca about the number of Winnipeggers who are along for the ride.

I’m not a capital “L” liberal, but I can’t stand what Harper has done to Canada’s reputation as a respected peace broker in the Middle East. I was in Ramallah in October – you can read about my visit there on our website, and I still hold out hope for a true peace between Israelis and Palestinians, but not so long as the settlements continue unabated.

Anyway, I just wanted to congratulate you for writing so truthfully about the reality of how much Canada’s Jewish community has been misrepresented by those establishment Jews in CIJA.

If anyone has the credentials to speak truth to power when it comes to criticizing the official Jewish position, it’s you, what with your past as one of the first to expose the kind of anti-Semitism that was being overlooked years ago when the Jim Keegstras were fomenting their hatred.

P.S. Ours is probably the only Jewish newspaper in North America that takes a principled stand against the right-wing policies that are dominating Israeli politics. And we’re still around. It says something for the support we receive from more thoughtful Jews – who are generally marginalized these days.