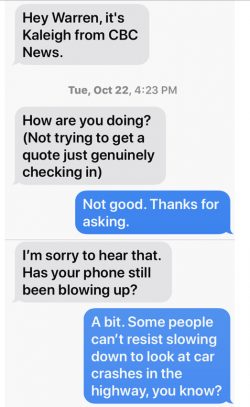 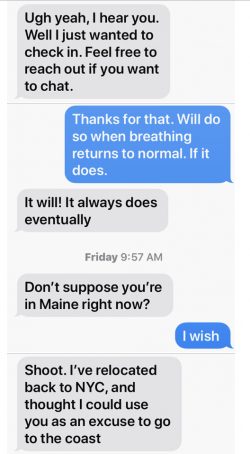 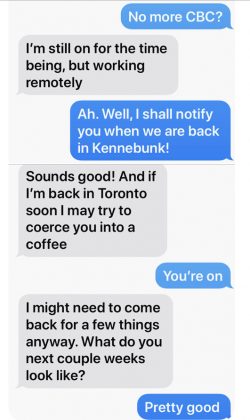 A reasonable apprehension of bias — that’s what we learned to call it in law school.

It’s the legal standard, in Canadian law, for disqualifying a judge or decision-maker in an administrative tribunal.

Bias is prejudice, mostly. It’s an unreasonably hostile feeling or opinion about a person or group. In law, we learned, it can be “real” or “perceived.” That is, it doesn’t have to actually happen right out in the open — the Supreme Court of Canada has ruled it can even happen when a decision-maker “might have” acted unfairly.

It’s not a question reserved for legal scholars, hidden away behind stacks of musty old volumes in a law library somewhere. On Friday, it became a question for the rest of us, too.

On Friday, the CBC — along with their newsreader Rosemary Barton, and Parliamentary Bureau reporter Jean-Paul Tasker — sued the Conservative Party of Canada. For real.

Their complaint: on the Internet, the Tories used 17 seconds of CBC video. About the Tories.

As the Conservative Party wrote in a release: “The 17 seconds of CBC clips in the video included (Postmedia columnist) Andrew Coyne highlighting how Justin Trudeau broke the law, Justin Trudeau telling a Canadian war veteran that he is ‘asking for more than we can give right now,’ and one CBC reporter questioning why the Liberals provided Loblaws with $12 million in tax dollars to install new refrigerators.”

When this writer heard about the lawsuit, it sounded like a joke, or an Internet meme. It was farcical.

Now, Conservatives have had a long (and sometimes also unreasonable) dislike for the CBC. Voters who identify themselves as conservative are acutely focused on media bias, particularly as it exists at progressive media organizations like CBC.

A number of Rasmussen polls conducted in the U.S. during the 2012 and 2016 presidential races found that two out of three conservative voters — and sometimes as many as three out of four — felt the media give progressive politicians a much easier time. They believe media bias is real.

Maybe so. Butts, for his part, was doing what politicos always do — he was trying to influence the media. Fine.

Raj, however, was doing something undeniably foolish. She was meeting privately with the most powerful unelected Liberal just before a critical debate, and thereby creating a perception that she would treat the Liberal leader differently.

Because Raj’s commentary has always been characterized by a pro-Trudeau tilt, a perception of bias was not unreasonable. At all.

Truly: how can Andrew Scheer, or any of his candidates, now believe that the CBC will treat them fairly in news coverage? More importantly, how can the CBC’s viewers and listeners now believe that what they are seeing and hearing is free of bias?

After all, how the CBC handles a news story — how it writes it, how it edits it, how it headlines and promotes it — can destroy a political career in short order.

Whether they intended it or not, the CBC and Barton and Tasker have provided clear evidence of an appalling bias. They have shown they are utterly disinterested in being fair.

That lawsuit wasn’t a legal action. Given that the Tories now may win the election, it was a political suicide note.