As a public service, I again watched last night’s proceedings on CNN, and reported my impressions on the Twitter machine.  As Joe racked up big win after big win, I started grinning, thinking about how I’m going to name and shame everyone who mocked me for supporting Joe Biden for years.

Herewith and hereupon, however, my assorted Twitter impressions, including my now-standard fun exchange with CNN’s Jake Tapper:

We’re reaching that magical time when @jaketapper @wolfblitzer and – most particularly – @JohnKingCNN’s wonderful wall will bewitch & beguile us on @cnn for #SuperTuesday2. If any of you interrupt me over the next few hours, I will have you exiled to Mar-A-Lago. I’m not kidding.

I derive adolescent glee from hearing about a place bearing the name “Kalamazoo.” #SuperTuesday2 pic.twitter.com/om8NnXFaWr

I’m again waiting for @DrBiden and @SymoneDSanders to kick the stuffing out of someone who steps out of line tonight. #SuperTuesday2 pic.twitter.com/eD7F22VURd

I hereby warn everyone who mocked me for supporting @JoeBiden over the years that I am about to dig up all their nasty comments and mock them endlessly for having their collective heads up their collective asses. #Democrats #SuperTuesday2 #JoeMentum

This Sanders spox on @cnn embodies the problem with that whole campaign: they think “OK Boomer” is an entire strategy. #SuperTuesday2 #Democrats

Sorry, I decided not to drop acid with you tonight. https://t.co/iMApCqrgjK

It’s pretty hard for Bernie to win this. pic.twitter.com/ekXb4UTX3B

Yeah, but I’m gonna work my ass off for him, and I hope it makes your head explode https://t.co/GQeU4NxDXn

This explains a lot of things about @JoeBiden and his strength and decency. pic.twitter.com/TPdC29ll0D

You said he couldn’t do it.

Quite a few of you, in fact. You know: Joe Biden will never win the nomination, it’s all over, he should quit, etc. Some commenters even said he had dementia or some mental illness – which got those commenters blocked (and will again in the future, I promise).

Well, he did it. Last night, Joe Biden won big. Hell, he won in states that he hadn’t even visited. States where he hadn’t run any ads.

I was glued to the results all night, and recording my reactions on Twitter and elsewhere. The night began, as it always does, with my exchange with a famous CNN news anchor:

I AM SO HAPPY RIGHT NOW https://t.co/AmTh22cQB7

He just won Virginia! That’s huge. Sanders always going to win his home state. But Sanders was expecting to be competitive in Birginia. Wasn’t. #SuperTuesday https://t.co/fXQD7Kc7Dl

Bloomberg gets a big fat zero in the state he needed most. #SuperTuesday

He’s not a Democrat. He can’t beat Trump. He’s a jerk to women. There’s a lot more but I’m not here to answer questions tonight. https://t.co/rfF3PLNwM7

Pro tip: if you come on my feed and make jokes about mental illness, falsely claim @JoeBiden has dementia, etc., you will be blocked.

Bloomberg spent half a billion dollars to get bupkis. #SuperTuesday

From the considerable political experience I acquired in Texas from ages seven to ten, I predict a @JoeBiden victory there. You’re welcome, pardner. #SuperTuesday

It’s actually a bit weird how much I love the @CNN board.

My golf pro son is in Florida while I watch #SuperTuesday results up here in the cold. He wanted me to show this to you guys. Be nice: he’s my retirement plan. pic.twitter.com/O2Qo6qSM3D

Now you all know why @realDonaldTrump conspired with a foreign government to hurt @JoeBiden. He feared Joe the most. #SuperTuesday #JoeMentum

My TV abruptly turned off for a few seconds and I had a heart attack. Unlike Bernie Sanders, however, I would not lie about releasing my health records. #SuperTuesday

When the history of #SuperTuesday 2020 is written, the kick-ass style of @DrBiden and @SymoneDSanders will fill a chapter. pic.twitter.com/NeE9PAHT0P

Aaaaand @JoeBiden just went ahead of the multi-millionaire socialist in Texas! #SuperTuesday #JoeMentum 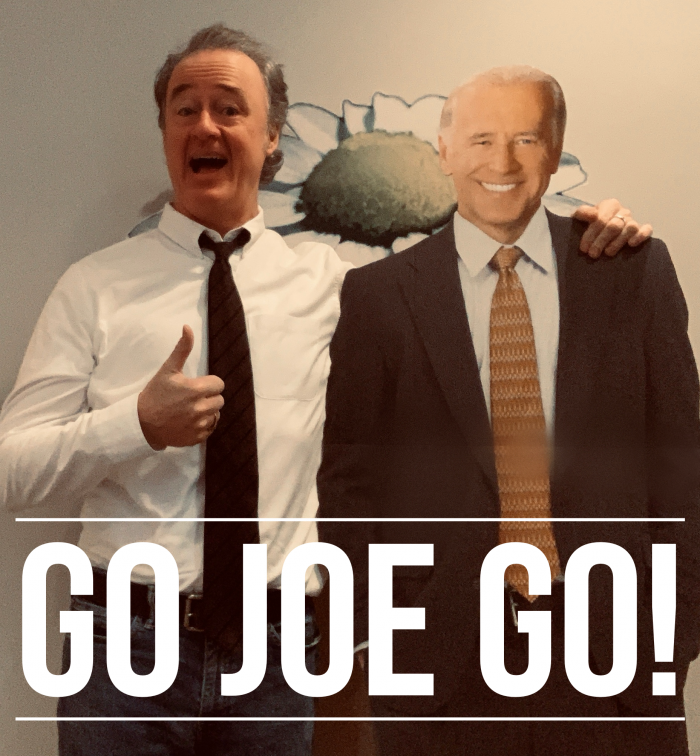 Joe and Justin: one’s a winner, one isn’t

There’s a connection. Stay with me, here.

In 2015 and 2016, I proudly volunteered for Hillary Clinton in two states, and at her Brooklyn headquarters. I’m going to be proudly volunteering for Joe Biden in 2019 and (if he’s the nominee) in 2020.

The reasons are threefold, and all of them – coincidentally – are quite relevant to Justin Trudeau’s political predicament in 2019.

One, we know why Joe Biden is running again. With Justin Trudeau, we don’t.

Joe commenced his campaign in a comparatively low-key way: he released a video on YouTube. He said he’s running to beat Donald Trump, because he’s the only candidate who can. Successive polls have shown that Americans know who Joe is, they like who he is, and they like him way more than Trump. He’s competitive with multiple demographics: African-Americans, older Democrats, Independents, the true working class.

Biden has what the advertising guys call a USP – a Unique Selling Proposition. That is, he can say things that his 19 Democratic competitors can’t. Experienced, likeable, scandal-free, Hell Of A Guy.

Justin Trudeau, meanwhile, no longer has a USP. In 2015, he was the self-proclaimed feminist. He isn’t any more. Gropegate – and his expulsion of Jody Wilson-Raybould, Jane Philpott and Celina Caesar-Chavannes, coupled with his nauseating decision to keep a sexual harasser like Kent Hehr in his caucus – have obliterated his “feminist” credentials.

In 2015, he was the Indigenous reconciliation guy. No longer. He demeaned and defamed Wilson-Raybould, the most prominent Indigenous leader in our collective lifetimes. And, as the former Attorney-General pointed out in a widely-reported speech last week, Trudeau’s government “has fallen back into a pattern of trying to manage the problem.” And the problem is colonialism.

Trudeau was the guy who promised to bring back ethics to government. He said he’d be open and transparent and not at all like the secretive and autocratic Stephen Harper. But the seamy, sordid LavScam scandal – which saw Trudeau and his minions pressuring Wilson-Raybould dozens of times to give help a corrupt Quebec company avoid a richly-deserved prosecution – has laid waste to the Liberal leader’s claim to the moral high ground.

What, now, is Justin Trudeau’s USP? Unlike Joe Biden, Trudeau has lost the narrative. He is unlikely to acquire a new one in the dwindling number of weeks that remain between now and the election.

Two: Joe Biden has what it takes to win, because he never forgot his roots. He never stopped boasting about his hardscrabble Scranton, Pa. youth. He grew up in a big Irish Catholic family in Scranton – in a crowded apartment – and the Bidens were forced to move to Delaware when Joe was ten, where his father secured a job as a used car salesman. He got into law school only because he got a scholarship. He participated in anti-segregation sit-ins. He struggled for everything he got.

Justin Trudeau, meanwhile, is the guy who likes to talk a lot about the middle class – but has never, ever experienced the middle class. Trudeau has never had to worry about paying the rent, or the next mortgage statement. He has never wondered where he’ll get the money to pay a hydro bill. He has never wanted for anything. His life has been one of mansions, private jets, and hanging out with celebrities.

Against Andrew Scheer – who, like Biden, grew up in a big immigrant Catholic family, and whose family didn’t have any wealth – Trudeau will likely appear privileged and out-of-touch. Scheer worked as a waiter and a salesman. Trudeau, meanwhile, wears a $15,000 IWC Portuguese Regulateur watch and drives a Mercedes-Benz 300SL. (Which, apparently, can sell for as much as $5 million.)

You’re not guaranteed a second term anymore. You’re not going to win simply because your candidate is more charismatic and more photogenic. You don’t win if you have the slickest social media.

If the 2016 presidential race taught me anything else, it’s this: everything in politics is different, now. Hillary had the best-organized, best-funded, best-staffed, best-led campaign I have ever been part of. But it didn’t matter: we still lost.

Politics has been upended, everywhere. So, traditional assumptions about campaigns – whether Joe is too old, too politically-incorrect, too centrist – are kind of irrelevant, now. Trump showed that.

Running the 2016 campaign again will get Democrats another 2016 result, and Biden knows it. He will therefore be at the centre of a decidedly un-Hillary-like campaign.

Justin Trudeau, meanwhile, is still fighting the last war. He’s using against Andrew Scheer the same stuff he used against Stephen Harper: that Scheer is mean and a neo-Nazi and has a hidden agenda. While he’s the middle class, feminist, ethical paragon. Blah blah blah.

As the Canadian and American national races edge ever-closer, we all know who Joe Biden is, and what he wants to do.

With Justin Trudeau, we just don’t. 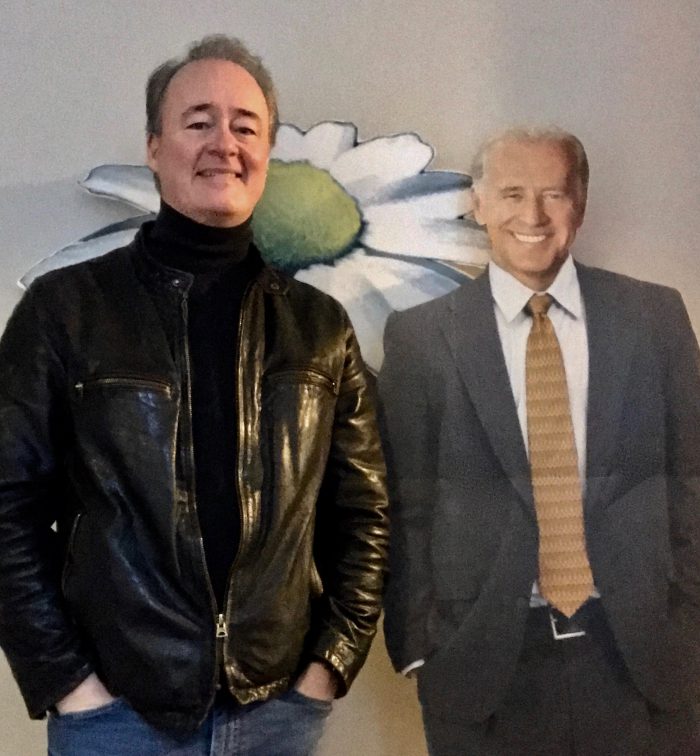