Against Me! in Kingston: supping lightning with the gods 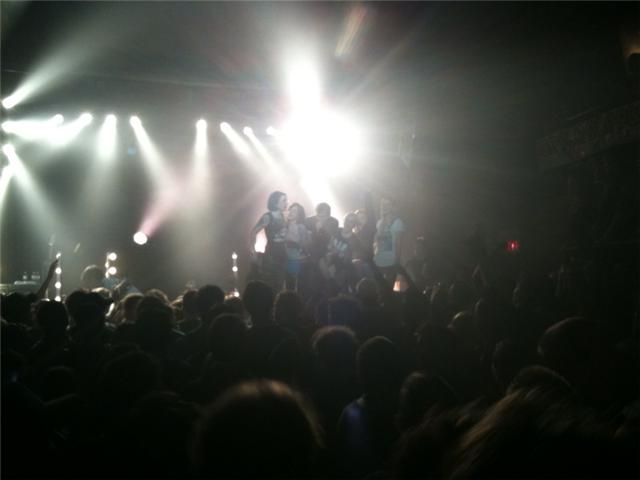 This is a fuzzy shot – taken on my iPhone on the periphery of the craziest pit scene I’ve seen in a while – of Tom Gabel onstage in Kingston last night, as a number of young women accompany him on ‘Thrash Unreal.’ They just climbed up out of the sweaty limbs and the chaos, and started singing along. Against Me! loved it. The crowd loved it. It was a perfect punk rock night.

The Kingston show was at an old Eighties-style disco venue called Stages, on Princess Street. For the past few days, Against Me! – who, as you all know by now, is my favorite band on Earth, the one for which I’d throw it all away and travel with as their geriatric roadie – has been on a cross-Canada stadium tour with Billy Tallent.

Being a punk purist, I do not believe punk rock should ever be experienced in a stadium. It’s Satanism. (I also have never quite gotten the Billy Tallent thing.)

So the Kingston show was special. AM were going to be showcasing some of the new songs on their yet-to-be-released album, White Crosses. And no American audience has heard those songs. And they were going to be there with the Cancer Bats, Canada’s best hardcore band ever. (And no Billy Tallent.)

So I had to get to Kingston. I had to.

My brother-of-another-mother Richard Warman – a ska and punk enthusiast of long standing – joined me there. We were easily old enough to be fathers to more half the crowd, a motley crew of mohawked punks, anarchists, peaceable skins and Queen’s jock types. It was wonderful.

What a show! What a night! The Cancer Bats again reminded the locals why they are the heaviest live act in the country – screeching through some tunes from their new record, due out in a couple weeks – and kicking off with a howling take on ‘Hail Destroyer,’ my unofficial Liberal war room anthem. Their version of the Beastie Boys’ ‘Saboutage’ literally took the roof off the place. Amazing.

Against Me!, meanwhile, came on at about 8:30 – it was an all-ages show, which made me regret I did not have my Cancer Bats-loving daughter with me – and proceeded to kick out the jams like you never get to see a band do anymore, and certainly not in a big aircraft hanger-style hall. They sweated, they danced, they pulled kids up onstage wih them to dance and sing.

Everyone there was close enough to know, to feel, that something special was taking place. It had a sense of community and joy about it that you only get at the once-in-a-lifetime gigs. It was like that.

You had to be there, I think, to capture the singularity of the show.  The only words that capture it, truly, are the stylings of The Great One – Lester Bangs, writing in the NME about seeing the Clash live for the first time, almost thirty years ago.  This is what it was like.  I wish you had been with us.

“The politics of rock ‘n’ roll, in England or America or anywhere else, is that a whole lot of kids want to be fried out of their skins by the most scalding propulsion they can find, for a night they can pretend is the rest of their lives, and whether the next day they go back to work in shops or boredom on the dole or American TV doldrums in Mom ‘n’ Daddy’s living room nothing can cancel the reality of that night in the revivifying flames when for once if only then in your life you were blasted out of yourself and the monotony which defines most life anywhere at any time, when you supped on lightning and nothing else in the realms of the living or dead mattered at all.”

UPDATE: “Thank you for whoever took this picture! .. I was the chick with the short blonde hair beside Tom .. and I can’t explain how much of an amazing experience that was!! I was kind of bummed that I didn’t have anything to commemorate that amazing moment in life, but now I do! Thank you so so so much! Alexina”