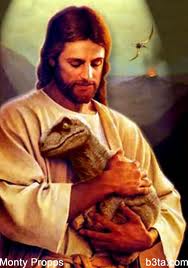 Has it really been ten years this week, little one?

Election 2000
National News
Candidates weigh in on creationism After burning for centuries, the debate on evolution versus creation bedevils leaders
CAMPBELL CLARK AND JILL MAHONEY
With reports from Brian Laghi, Heather Scoffield,, Shawn McCarthy and Susan Bourette
740 words
17 November 2000
The Globe and Mail

OTTAWA and EDMONTON — Stockwell Day’s creationist beliefs sparked a rare mixing of religion and Canadian politics yesterday, with some opponents saying the Canadian Alliance Leader’s religious views should be an issue for voters.

After a CBC documentary reported that Mr. Day had said he believes in creationism, that the world is 6,000 years old, and that humans and dinosaurs had once co-existed, Mr. Day issued a statement saying there is scientific evidence to support both the creation and evolution theories of the origins of man.

Yesterday, Mr. Chretien gently poked fun at the issue when he was asked about his own religious views. “I am for the creation of jobs,” he told reporters in Saskatoon. Mr. Chretien is a Roman Catholic, but he said he keeps his religion and his politics separate.

Liberal aide Warren Kinsella was more forthcoming, charging that Mr. Day cannot be trusted to keep his religion separate from his political agenda. In a television interview, he brought out a stuffed animal from the children’s TV show Barney, joking he was the only dinosaur to co-exist with humans.

“The Flintstones was not a documentary,” he said.