The Party of the Constitution 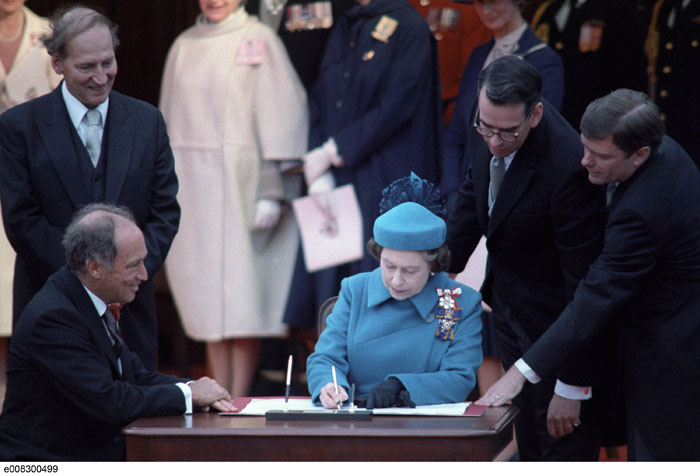 Her Majesty makes it official.

I was there, that cold April day – with my roommates Harold, Chris and Ryan. Afterwards, we went to Grad’s on Somerset to have what we described as “Constitution beers.” We had not a few, as I recall.

I also recall that we grumbled about the number of old white men onstage on the Hill, and how seats were reserved at the front for VIPs. We thought of the Constitution as the people’s document, not the personal property of the elites. But, in the main – and like everyone else on that blustery Ottawa day – we were happy. It felt like we were a new country.

In the intervening years, of course, quite a few other Canadians have come to be fond of our Charter of Rights and Freedoms, too. Polls have shown that Canadians, everywhere, are proud of it.  Twenty years after that day, a national survey found that 88 per cent believed the Charter was a “good thing for Canada,” and 72 per cent said it adequately protects the rights of Canadians. Support for the Charter was strong in all regions, running from a high of 91 per cent in Quebec to 86 per cent in Western Canada.

Thirty years later, support for the repatriation of the Cosntitution – and the proclamation of the Charter – remains just as high.  Even with the mythology surrounding “the night of long knives,” Quebeckers remain enthusiastically onside.

Because they despise the notion of equality which it embodies, Stephen Harper’s Reformatories refuse to acknowledge the Constitution.  The New Democrats, meanwhile, have their Sherbrooke Declaration, which advocates for breaking up Canada with just one vote, contrary to a hallowed Supreme Court constitutional decision – and a new leader who passionately favours “asymmetrical federalism,” and constitutional inequality, and the Sherbrooke Declaration.

In the United States, political parties jostle to be seen as the defenders of the Constitution.  To them, it is the supreme legislative expression of the nation itself. In Canada, the two (presently) leading federal parties regard it as inconvenience, or worse.

And, morally, it is our obligation.