So, Tony Genco: was a federal Liberal, lost. Became a provincial Conservative, lost. Now he’s running again, although not for the NDP. He’s still a Conservative, although he’s a bit hard to pin down the issues and whatnot.

Thus, this sign. It’s a little hard to make out (perhaps it was snapped by Mayor Ford as he was driving around).  But I can assure you that it is a Conservative sign, and it’s for Phony Tony, the affectionate term we Ontario Liberals have for Tony Genco. There’s just one problem, however.

It’s in the wrong riding. It’s in Thornhill. That’s a problem, because Phony Tony is running in, you know, Vaughan.

Is Phony Tony finally going to win something? Well, I dunno. If there was a by-election taking place in Thornhill, he’d be way out in front. 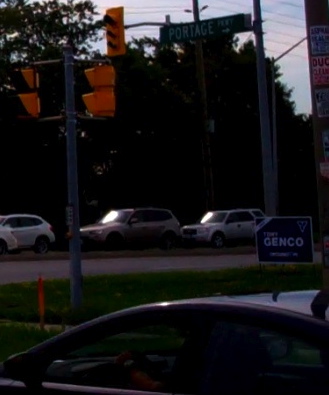