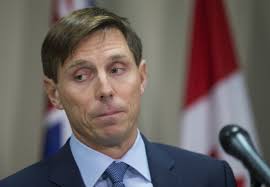 Welcome to today’s class in how not to do P.R., folks.  Today’s case study is Patrick Brown, former leader of the Progressive Conservative Party.

Three weeks ago, CTV  broadcast a report that Brown had engaged in graphic sexual misconduct with two very young women.  He denied the allegations of the two young women, but he stepped down a few hours after the CTV report.

His party started a leadership race to replace him.  All of the candidates seem to be a lot more popular than he was.

Three weeks after he resigned, Brown hired a PR firm and started a media tour.  He attacked the young women who made the allegations against him.  The two young women doubled down on their stories, refusing to back off.

I have been told by CTV folks that Brown has not taken steps to sue them or his accusers.  And he’s rapidly running out of time to do so.  In my view, until he serves a Libel Notice, I don’t give a rat’s ass about whatever he has to say.  It’s all spin or bullshit, at this point.

I found that out on-air, on CFRA on Monday afternoon.  I was on Evan Solomon’s show with Karl Belanger and Alise Mills when Alise said she was working with Brown, and that he had hired private investigators.  Here’s what she said: “Patrick has hired someone to do the forensics, a P.I., he’s got a very strong legal team.”

Evan and I started questioning Alise, who I know to be an honest person.  She didn’t walk back her statement.  She stood by it.

To repeat: Patrick Brown has hired private investigators to do “forensics.”  Forensics are defined  as “scientific tests or techniques used in connection with the detection of crime.”

Those are the only possibilities.  If it’s either 2 or 3, it is big, big news: a sitting member of the provincial legislature has hired private investigators to go after the media and two young women who claim to have been sexually assaulted. (Another possibility: he’s investigating other MPPs: but that would be a clear violation of their Parliamentary privilege.)

Anyway. If the above is true – if what Alise Mills revealed on Monday is indeed the case – I do not see how Patrick Brown can be permitted to retain his seat.

That’s not the kind of person we need in our provincial parliament.