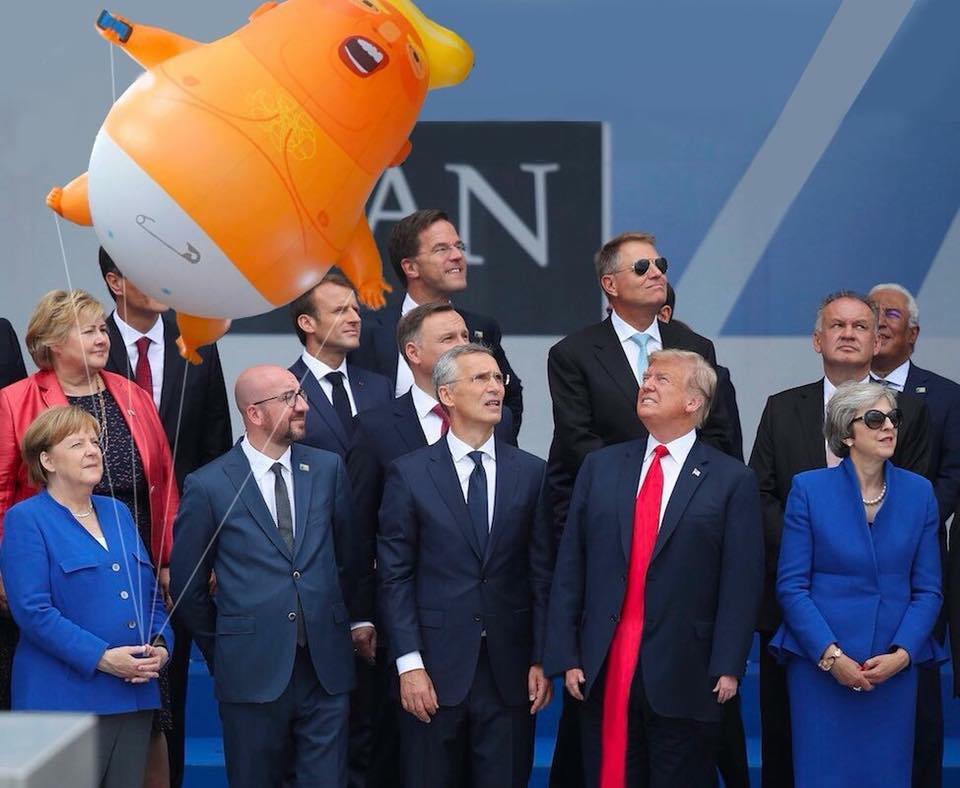 Column: before the #TreasonSummit ends, @realDonaldTrump has already won

When we have all been reduced once again to ashes – when the web site you now peer at is reduced to digital dust – thinkers will think, as thinkers do: how did Donald Trump win?

Because, you know, he did.

Donald Trump won. He beat us all. He has dominated the politics of this era like no other, standing astride it like a Cheeto-coloured colossus.

In Britain’s The Times, just two stories – one about their World Cup loss, naturally, but the other is about Trump, coming to have tea with the Queen. In Germany, the verdict in a homicidal neo-Nazi’s trial is ubiquitous – and then there is Donald Trump coverage, above or near every fold. And so on.

How does one define a political “win” in these uncertain, unpleasant times? With a weighty legislative change? Not really – Doug Ford is showing Kathleen Wynne how quickly those can be undone, like the flicking of a light switch.

Is stirring political oratory a win? Not that, either. Barack Obama’s best-ever speeches came when he campaigned for Hillary Clinton and against Donald Trump in late 2016 – but the latter still won, and the former still lost.

Is opposing prejudice and division a win? If only it were so. The forces of hatred, regrettably, are on the march in 2018 around the globe, achieving real power. While the majority of us look on, despairing.

At this point, in this year in this Century, winning is simply defined as sheer dominance. Winning is not just securing power – it is wielding power in such a way that no one else can be heard anymore.

A Democrat, of all people, predicted all of this more than 20 years ago. His name is David Shenk, and he wrote a book called Data Smog. It posits that information, once doled out like caviar, is now potatoes – abundant and tasteless. He writes: “At home, at work, and even at play, communication has engulfed our lives. To be human is to traffic in enormous chunks of data,” he writes, adding:

“At a certain level of input the glut becomes a cloud of data smog that no longer adds to our quality of life but instead begins to cultivate stress, confusion, and even ignorance. Information overload crowds out quiet moments and obstructs much-needed contemplation. It leaves us more vulnerable as consumers and less cohesive as a society.”

If you are peering at this opinion column on your phone, you are proof of Shenk’s claim. Every day, every morning, you are bombarded by hundreds of thousands of words and images. So, you do what humans do when they are overwhelmed by data smog: you turn it all off.

So what, one may say. Is dominance truly a measure of political success?

Dick Morris, an advisor to both Republican and Democratic presidents, agrees that it is. He even has a phrase to append to it: “managing the dialogue.” If you manage the dialogue, you are winning.

Political debates, for example. A simple way to measure success in a debate is to count the number of debate minutes devoted to your side’s key messages (eg. for a progressive, health or the environment) and not the opposition’s (eg. for a conservative, tax cuts or “getting tough on crime”). You win when your side’s narrative has taken up the greatest number of minutes in any given debate. That’s it.

And that is why Donald Trump is winning: not because of his messages, per se. Not because all of the world has embraced madness, and is tilting towards fascism and nativism.

He is winning because his voice drowns out all others. He is, at any given time, the most-discussed topic on Earth. Because he is LOUD. Because he is BLUNT. Because he KNOWS HOW TO GET YOUR ATTENTION.

For the Democratic Party’s mid-term war room, this means abandoning traditional approaches – scandal-mongering, inappropriate quotes and votes – and dialing the volume up to eleven. It means hitting Trump twice as hard when he hits them even once.

For progressive rivals, like Angela Merkel or Justin Trudeau, all is not lost. If they abandon the progressive’s natural tendency to always observe boundaries and to always be inoffensive – to be colourless, and therefore without passion or values – they can compete with Donald Trump. Trudeau, in particular, is skilled at attracting attention (although, lately, it is the wrong kind of attention).

In the end, however, one immutable truth remains: Donald Trump is the face of this era.

When the rest of us are long gone and forgotten, he will be the one who is remembered.