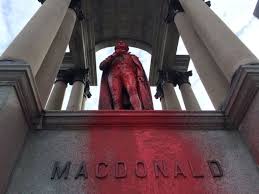 From next week’s Hill Times column, which I’m still trying to cobble together, like a monument of sorts:

If you disagree [that we should remove statues paying tribute to racists], a challenge. Imagine, for a moment, you are a First Nations person – or imagine that you are, like me, father to a beautiful and perfect indigenous girl.

Just imagine that. Then read these words.

Here’s what [Macdonald] said in 1879: “When the school is on the reserve, the child lives with its parents, who are savages. He is simply a savage who can read and write. Indian children should be withdrawn as much as possible from the parental influence, and the only way to do that would be to put them in central training industrial schools where they will acquire the habits and modes of thought of white men.”

And “put them down” Sir John A. did. He gave Canada’s First Nations – the ones who were here first – assimilation, brutality and genocidal residential schools.

That’s what he gave them, and us.