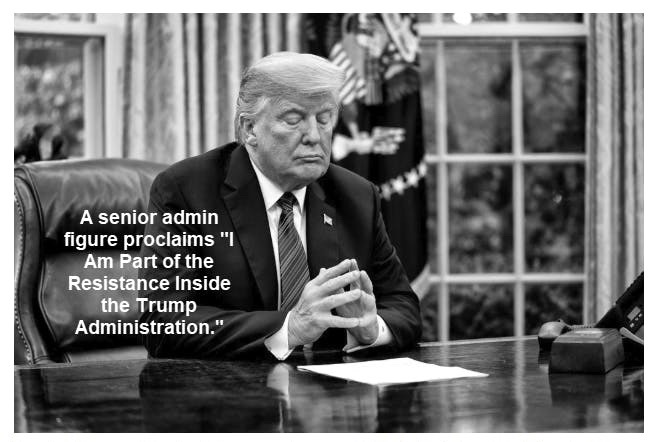 The White House resister’s tale has saved thousands of jobs in Canada. Here’s why.

The I AM PART OF THE RESISTANCE INSIDE THE TRUMP ADMINISTRATION story was shocking for this reason: it details a high-level mutiny against a sitting President of the United States.  It describes what can only be fairly regarded as a constitutional crisis, one that will shake the world’s most powerful democracy to its foundations.

As a leak of Bob Woodward’s book Fear detailed the day before the resister’s tale was told, senior officials are now actively and regularly bypassing and overruling the decisions of the President.  They are even snatching documents off the top of his desk in the Oval Office, so he doesn’t see them.

The ramifications of the New York Times’ bombshell will be felt beyond the United States.  With the mid-terms just weeks away, with the Democrats maintaining a double-digit lead over Republicans, and with the Trump Administration falling apart at the seams, the resistance story will oblige Donald Trump to mostly give Canada what it wants in the byzantine NAFTA negotiations.

Ten days ago, Donald Trump was promising to exclude Canada from a trade deal, and mocking us.  Ten days later – and after the revelation in Woodward’s book, and the Times’ account of the resister’s palace coup – Trump cannot afford to lose the few Republican allies he has left in Congress.

`The moment that leak was published, Canada’s trade ambitions were rescued.