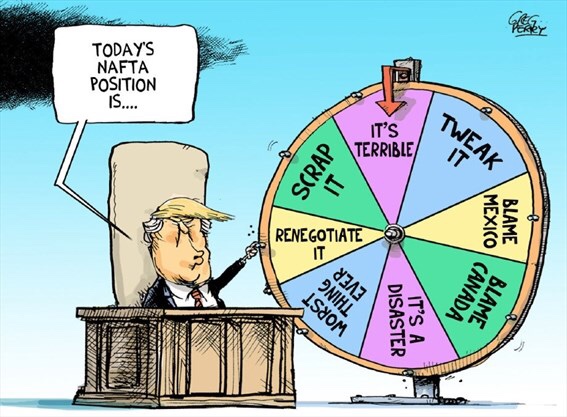 NAFTA: behind the scenes

Clow would not speak for this story.

But someone who trained him in working war rooms was happy to share some thoughts about him and the job. It was Warren Kinsella who brought the modern campaign war room to Canada in 1993, modelled on Bill Clinton’s 1992 run, and who also authored, “Kicking Ass In Canadian Politics.”

These campaign operations shape news coverage by providing key components of a story, quickly, to journalists operating in a tougher environment of 24-hour news and declining research budgets: quotes, facts, and people willing to be interviewed.

“(Clinton aide James) Carville told me, ‘The media atom has split.’… You can’t just take (reporters) out to lunch and spin them and the story appears two days later,”‘ Kinsella said.

“(A war room is) basically a newsroom.”

It also provides a central hub so different offices are in contact, and don’t contradict each other. The Canada-U.S. unit includes the PMO’s Butts and Telford, Freeland, ambassador to Washington David MacNaughton, and writer Michael Den Tandt.

Kinsella was impressed with Clow’s speed, cool, and ability to pump out video content while he worked on the 2007 and 2011 Ontario Liberal campaigns.

Kinsella joked that in elections all his job entailed was pulling pins from grenades and lobbing them. This team must prevent explosions, while working with thousands of officials, multiple government departments, two countries, industry groups, one global economic superpower, and an unpredictable president.

The unit got to conduct early test runs.

When Trump complained about Canadian dairy and lumber, and threatened a NAFTA pullout, it handled the response. The Canadian side kept the temperature down; it responded to heated rhetoric with statistics and telephone calls, and things quickly cooled down.

The U.S. government began by complaining about Canada’s historic trade surpluses. Canadian officials were later in the lobby, handing out fact sheets showing a trade deficit.

“We used to call those ‘heat sheets,” Kinsella explained. He’d have his team slip them under hotel-room doors while reporters were sleeping, so they might shape the next day’s news.

“That’s how you win a campaign.”