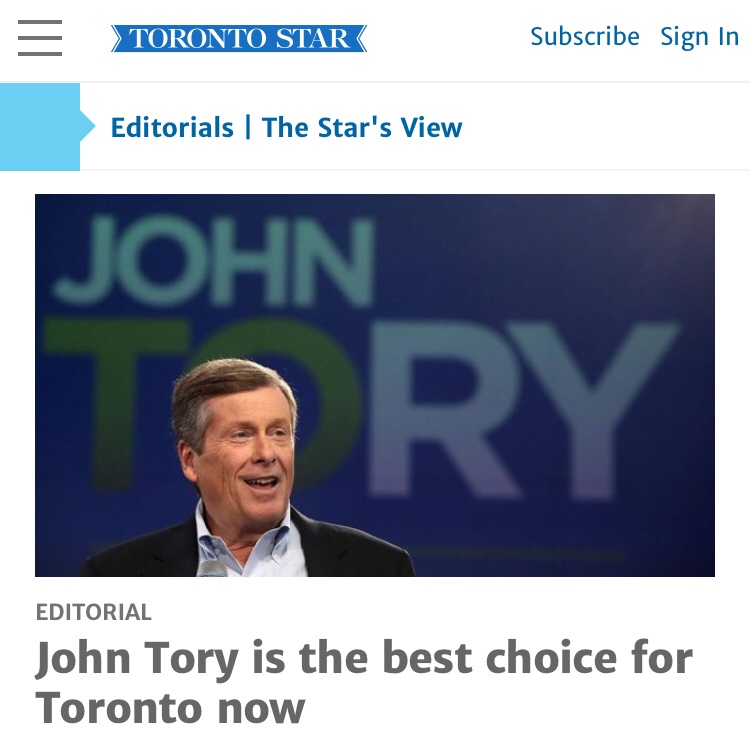 Why Tory won (bigly), why Keesmaat lost (badly), and who was behind the scenes

What, presently, is the biggest election in Canada?

And – most critically – it involves all of the major political parties, and has lessons to offer all of them.

Toronto, come on down!

Now, before we get started, full disclosure: this writer is volunteering for one of the mayoral candidates. Been doing so for many months. So, bias spoiler alert.

But the Toronto municipal election perhaps provides some helpful insights about the federal election that will be concluding one year from today. Three points.

One: the so-called Left – New Democrats and orangey-red Liberals – is in trouble.

Keesmaat gave as good as she got in debates. She knew the issues. The camera loved her, the media gave her plenty of attention, and she could speak in pithy soundbites on command.

But her campaign – despite all of that – never caught on. It stalled, and then it ground to a halt. When the Toronto mayoral campaign concludes, a week from today, Jennifer Keesmaat may well end up more than forty percentage points behind her main opponent, Toronto mayor John Tory. As such, she is days away from the most humiliating municipal loss the Left has experienced in Toronto in decades.

Not everything that ails the Left can be pinned on Jagmeet Singh, folks. If the disastrous Jennifer Keesmaat has shown us anything, it is that voters remain suspicious of political options on the Left. Even in Toronto, where the political Left has traditionally found a foothold, things have gotten decidedly frosty.

Two: the centre is still the place to be.

In the Trump era – post-Brexit, when so-called “populist” candidates are seemingly winning public office across the Americas and Western Europe – we have become accustomed to centrist candidates being squeezed out by the political extremes. In these nasty, brutish and short-sighted times, voices of moderation seem to be outnumbered.

Tory’s mayoralty has been characterized by moderation and balance. He has held the line on taxes, but also championed a transit discount for seniors, and a Kids Ride Free transit program. He’s pushed to hire more police (which has pleased the political Right) – while also becoming a national voice for a handgun ban (which has delighted the political Left). As a result, polls show Tory is supported by as much as 70 per cent of traditional Liberal voters – and a majority of Conservative voters, as well. Not many politicians can claim to do that.

As such, his team – campaign and/or mayoral – has been always comprised of advisors from across the ideological spectrum. Luke Robertson, Vic Gupta, Amanda Galbraith, Vince Gasparro, Keerthana Kamalavasan, Don Peat, Deb Hutton, Andrew Tumilty, Courtney Glen, Chris Eby, Amanda Galbraith and (of course) Nick Kouvalis – they were brought together, and kept there, by Tory’s centrist approach. (Me, too.)

The mayoral race has itself become a microcosm of the wider political clashes now taking place across Western democracy. On Tory’s Left was the aforementioned Jennifer Keesmaat, around whom the ideological Left has rallied. On the mayor’s Right were assorted candidates of the Right and far-Right – among them Faith Goldy, a white supremacist with a formidable social media presence, and James Sears, the publisher of a neo-Nazi newspaper.

In Toronto, the ideological extremes essentially reminded voters why they wanted to vote for John Tory. The attacks that Keesmaat (in particular) levelled at Tory – that he was dull, that he delayed, that he dithered – rebounded on her. Voters rallied around him, preferring Tory’s calm, methodical and decidedly centrist approach.

In Trump times, again, it had seemed that running a chaotic, shambolic election campaign – as Trump did in 2016 – won’t hurt your chances, so much. The candidates who seemed to be winning seemed the be the ones who didn’t run campaign ads, didn’t prepare for debates, and didn’t have staff with any experience. Donald Trump, in other words.

The outcome of the Toronto municipal race suggests all of that was the exception, not the rule. John Tory’s campaign was staffed by experienced Conservatives, Liberals and even a few New Democrats – and the experience showed. On election night, Tory will not merely win: polls suggest he will win in a landslide against a capable and smart opponent.

It’s never a good idea to read too much into by-elections. So, too, municipal races, and what they mean for politics generally.

But this Toronto municipal race has been significant – for what it means for Canada’s political Left, for centrist politicians, and for traditional election campaigns.