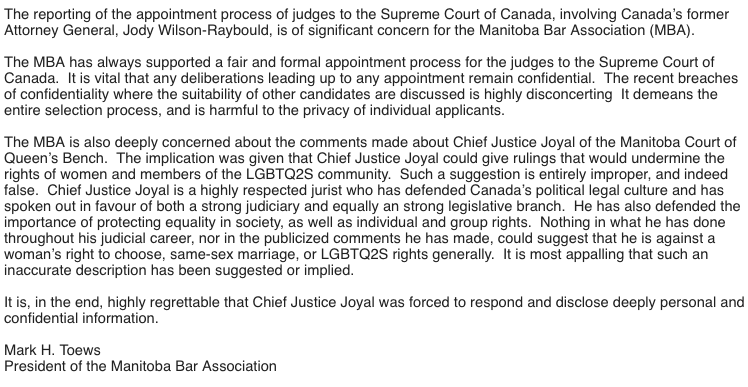 Bar Associations: Justin Trudeau’s office “demeaned” the judicial process – and acted in a manner that was “false, improper and appalling”

Justin Trudeau’s PMO has made history: so intent were they on smearing Jody Wilson-Raybould, the Liberal leader and his apparatchiks violated the confidentiality of the judicial appointment process – and they smeared a respected jurist who was tending to his wife. Who had breast cancer.

It got a reaction. One that none of his predecessors ever did.

“There is a process to get informed input about the merits of the applicants. It rightly goes on behind closed doors. Keeping the deliberations confidential respects the privacy of applicants and guards against interference. Breaching confidentiality by releasing the names and commenting on the suitability of the other applicants after the appointment demeans the selection process and ultimately all those who hold the office of judge.”

And here is the Manitoba Bar Association:

“It is vital any deliberations leading up to any appointment remain confidential. The recent breaches of confidentiality…[are] highly disconcerting. It demeans the entire selection process…The Manitoba Bar Association is also deeply concerned about comments made about Chief Justice Joyal…[which were] entirely improper and indeed false…It is appalling.”