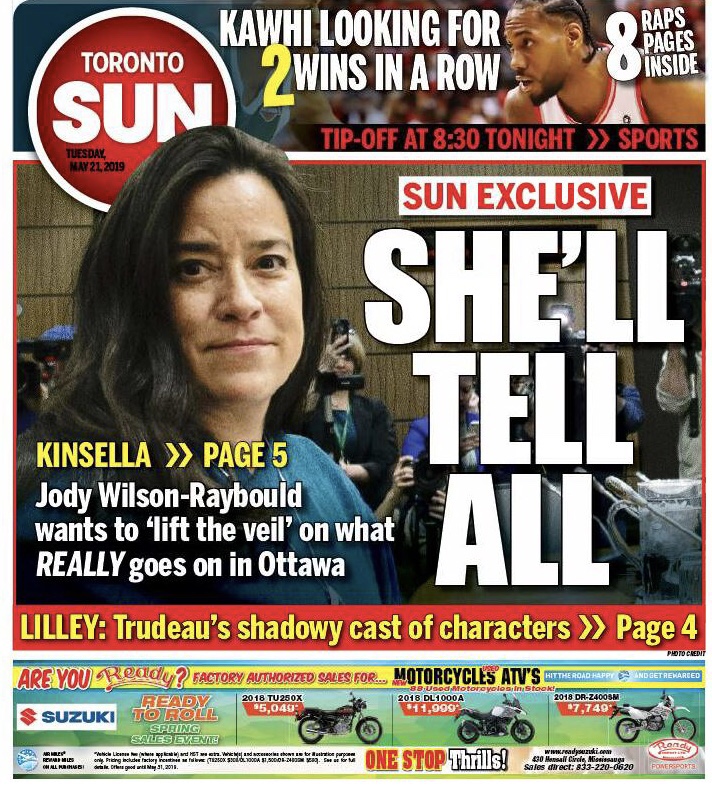 Exclusive in the Sun: JWR speaks!

She says it’s true — the actions of the Liberal Prime Minister should be “of great concern for many Canadians, across the country.”

She says, truthfully, that Justin Trudeau has acted in a way that is “questionable.”

She says what happened her is “a wake-up call” — and, while she’s not happy about what Justin Trudeau did to her, she’s running again.

And — when, say, a Prime Minister Andrew Scheer gives her the legal green light to do so — she plans to tell all.

She plans to reveal what really happened “behind the veil” in Trudeau’s Ottawa.

In an exclusive interview with the Toronto Sun this week, the former Attorney-General of Canada spoke at length about how she’s feeling, the issues she cares about, and what the future holds for the courageous woman who shook Canadian politics to its foundations in 2019.

It’s been quite a ride for Wilson-Raybould, the Member of Parliament who started the year as the most powerful lawyer in the land — and, just 100 days later, was expelled from the federal Liberal caucus.

For being a whistleblower on corruption. For speaking truth to power. For having the guts to say “no” to Justin Trudeau and the men around him, who refused to take “no” for an answer.

The fundamentals in the LavScam scandal, by now, are well-known.

For four months in 2018, Trudeau, the Minister of Finance, and their unelected apparatchiks bullied and threatened Wilson-Raybould, demanding that she rig the system to help a seamy Quebec company — SNC-Lavalin — escape criminal prosecution for corruption charges.

Wilson-Raybould refused to do so.

By the time the whole sordid affair lurched to a close, Wilson-Raybould and her cabinet ally Jane Philpott had been defamed, demeaned, and dumped from the Liberal caucus.

Trudeau had lost his two closest and most powerful advisors — Principal Secretary Gerald Butts and Clerk of the Privy Council Michael Wernick.

And the Liberal Party commenced a truly dramatic slide in the polls.

If an election was held today, in fact, Trudeau’s formerly-invincible party would suffer a humiliating loss to the Conservatives.

With the dust now settled, somewhat, what does Jody Wilson-Raybould think about it all?

“I am still somewhat sad,” she says.

“But, mostly, disappointed over what transpired the last number of months – given how I was removed from caucus through a questionable process and treated for doing what, at the end of the day, was the right thing to do, for the right reasons.”

She adds: “Having said that, I’m embracing my new position as an independent MP for Vancouver Granville and remain inspired by the incredible reception I’ve received from thousands of Canadians and their encouragement for me to stay in politics.”

Are they encouraging her to run again? Will she?

“My time in federal politics is not over,” Wilson-Raybould says, a bit mysteriously. “I will be making a decision shortly. Stay tuned.”

Before LavScam, most everyone had seen a second Trudeau majority government as inevitable.

Says she: “[LavScam] was a wake up call for many – a peek behind the veil of how Ottawa works. I know, like me, many of the class of 2015 who came into federal politics for the first time truly believed there was a different way to do politics. We knew what this was supposed to mean. Unfortunately our experience did not match expectations or the standards we had set ourselves. The last months have led me – and I suspect many of my former colleagues, and I know countless Canadians – to pause and consider the way the system works.”

Can that system ever change? What needs to change? Wilson-Raybould doesn’t hesitate: politics which are “less partisan,” she says.

Freeing MPs to “truly represent their constituents.” And – contrary to what happens in Justin Trudeau’s Ottawa – a Parliament “where truth is expected.”

After all that has happened — after all that she has endured — does Jody Wilson-Raybould still have a truth to tell?

If Justin Trudeau is defeated, and his successor removes the cabinet confidence/solicitor-client privilege gag he’s slapped on her, will Wilson-Raybould finally tell us what happened “behind the veil?”

Jody Wilson-Raybould doesn’t hesitate about that, either.

“I will speak the truth,” she says, adding that she will certainly do so — when she is finally “free to do so.”

Promise to give Jody Wilson-Raybould the freedom to speak her truth, Andrew Scheer.

Put it in your election platform.

The truth, as they say, will set you free.

It may get you elected Prime Minister, too.