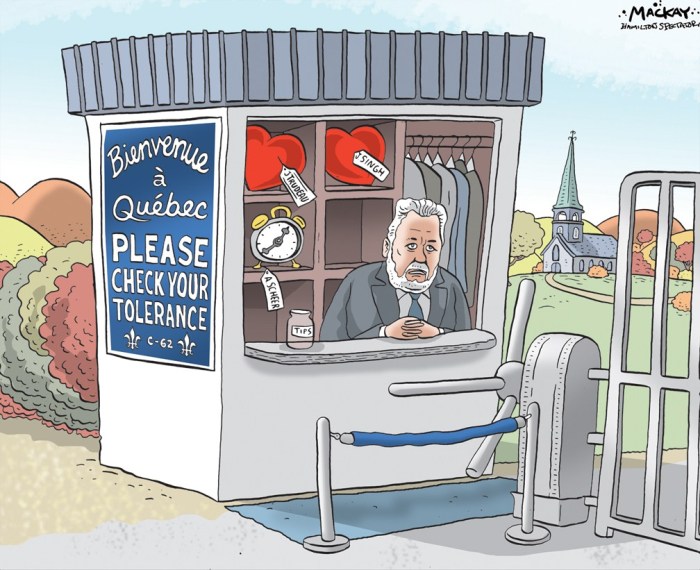 My latest in the Sun: when they came for the Jews/Sikhs/Muslims, they said nothing

That’s all that could be heard from the federal party leaders, essentially: silence, or something approaching that.

The occasion: the decision of assorted Quebec politicians to pass a law telling religious people what they can wear. Jews, Sikhs, but mainly Muslims.

The law, formerly called Bill 21, was passed last weekend in a special sitting of the so-called National Assembly. It makes it illegal to wear religious symbols at work if you’re a teacher, a bus driver, a cop, a nurse, or even a day care worker. It applies to everyone who gets a stipend from the province, basically.

The law is illegal. It is wildly unconstitutional, for all the reasons you’d expect: it stomps all over freedom of speech, freedom of religion and equality rights. It giddily shreds the Charter of Rights and Freedoms.

The law is against the law. So, Quebec’s ruling class – who have never been particularly fussy about Jews, Sikhs or Muslims, truth be told – also stipulated that their law would operate “notwithstanding” the Charter.

In Quebec, now, you’ve theoretically got freedom of speech and religion. Except, say, when the chauvinists in the National Assembly say you don’t.

Stick that yarmulke in your pocket, Jew. Remove that turban your faith requires you to wear, Sikh. Put it away.

As history has shown us, freedoms rarely get swept away with dramatic decrees. Instead, we lose freedoms by degrees. In bits and pieces. Fascism typically slips into our lives without a sound, like a snake slithering into the kitchen, unseen.

This week, the snake curled around the ankles of Justin Trudeau, Andrew Scheer and Jagmeet Singh. All of them pretended that the snake was not there.

Justin Trudeau, in his teeny-tiniest mouse voice, suggested that no one should “tell a woman what she can and cannot wear.” That’s all we got from him, pretty much.

Andrew Scheer, for his part, said he “would never present a bill like that at the federal level.” But, he hastily added, he would also leave the whole messy business to the “elected members in Quebec.”

Jagmeet Singh, who now couldn’t get a provincial job in Quebec because he wears a turban himself, said this about the law when it was tabled: “I think it’s hurtful, because I remember what it’s like to grow up and not feel like I belong.”

But action? Actually, you know, doing something to protect minority rights and religious freedoms in Quebec?

Not on your life. It’s an election year, pal.

During one of the many, many debates Quebec has had about this legislated intolerance – when controversy was raging about the then-Liberal government’s bill that would force women to remove veils when, say, getting on a city bus – Francois Legault, then an Opposition leader, was asked about the crucifix hanging in the National Assembly.

It should stay, he said. “We have a Christian heritage in Quebec,” he said. “I don’t see any problem keeping it.”

That’s when Francois Legault’s veil slipped, as it were. That’s when we got to see who he really represents.

At his very first press conference after the Quebec election, Legault dispensed with any notion that he would be the Premier to all. To the Muslims (with their headscarves), and the Jews (with their kippahs), and the Hindus (with their markings on their faces), Legault’s message was plain: I don’t represent you. I don’t care about you. You are lower-class.

And, now, from our federal leaders: a shrug. Indifference.

Jesus, from that spot He long had above the National Assembly, is (as always) needed. Right about now, Jesus could remind our politicians, federal and provincial, what he said in Matthew 23:3. You know: