How the pollsters got Trump’s victory wrong

Fascinating piece in the Times. Key reasons they messed up:

By and large, nationwide surveys were relatively accurate in predicting the popular vote, which Hillary Clinton won by two percentage points. But in crucial parts of the country, especially in the Midwest, individual state polls persistently underestimated Mr. Trump’s support. And election forecasters used those polls in Electoral College projections that gave the impression Mrs. Clinton was a heavy favorite.

AAPOR’s analysis found several reasons the state polls missed the mark. Certain groups were underrepresented in poll after poll, particularly less educated white voters and those in counties that had voted decisively against President Barack Obama in 2012. Respondents’ unwillingness to speak honestly about their support for Mr. Trump may have also been a factor.

These and other issues could reappear in 2020, pollsters warn, if they’re not addressed directly.

To make sure their results reflect the true makeup of the population, pollsters typically “weight” their data, adding emphasis to certain respondents so that a group that was underrepresented in the random sample still has enough influence over the poll’s final result. Polls typically weight by age, race and other demographic categories.

But some state-level polls in 2016 did not weight by education levels, therefore giving short shrift to less educated voters, who tend to be harder to reach.

This often understated Mr. Trump’s support, since he was markedly more popular than past Republican nominees among less educated voters — and noticeably less popular among those with higher degrees, who research suggests are more likely to participate in polls.

The AAPOR analysts found that many polls in swing states would have achieved significantly different results had they been weighted for education. This, in turn, would have noticeably decreased Mrs. Clinton’s lead in much-watched polling averages and forecasts of these states. 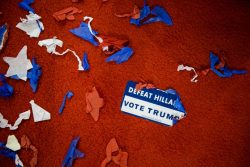