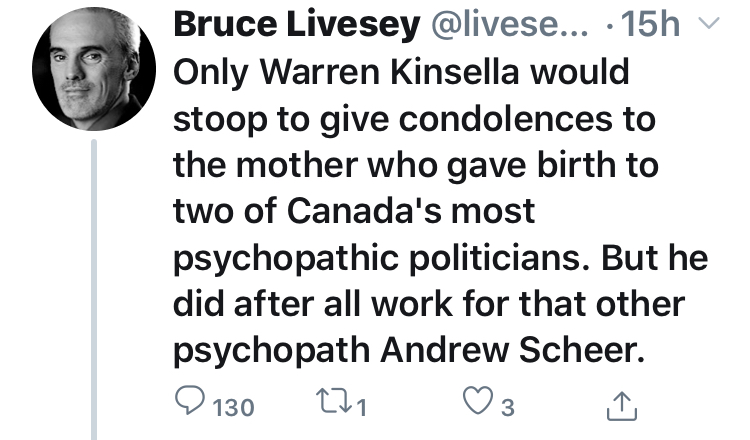 …that’s what I was taught, growing up.  You evidently weren’t.

Back story: sadly, Diane Ford died.  I tweeted this about her passing.

That elicited this simply extraordinary reaction from Bruce Livesey, an actual journalist who has worked for the CBC, PBS and others.

Only Warren Kinsella would stoop to give condolences to the mother who gave birth to two of Canada's most psychopathic politicians. But he did after all work for that other psychopath Andrew Scheer.

Hey, Bruce Livesey: she died. She was a mother who died. And you say that offering condolences – which everyone, of every stripe, is doing doing tonight – “stooping.” You’re an asshole. Now fuck off. https://t.co/KI4rfDPDgu

Anyway, it’d be bad enough for a nameless troll to write what he wrote. But for an actual journalist? Pretty awful.

If you agree, feel free to him know what you think. I did.